Download this LitChart! (PDF)
Teachers and parents! Struggling with distance learning? Our Teacher Edition on Euthyphro can help.

Welcome to the LitCharts study guide on Plato's Euthyphro. Created by the original team behind SparkNotes, LitCharts are the world's best literature guides.

A concise biography of Plato plus historical and literary context for Euthyphro.

A quick-reference summary: Euthyphro on a single page.

In-depth summary and analysis of every of Euthyphro. Visual theme-tracking, too.

Explanations of Euthyphro's symbols, and tracking of where they appear.

An interactive data visualization of Euthyphro's plot and themes.

Plato was born to an aristocratic family in Athens, Greece. He was well-educated and excelled as a wrestler. Historical accounts suggest that Plato traveled extensively in his youth, likely to Italy, Egypt, Sicily, and Cyrene (present-day Libya). When Plato returned to Athens at the age of 40, he founded the Academy, widely considered to be the first formal university in Europe. Students at the Academy included the philosopher Aristotle. Plato died at the age of 80 or 81, after having written over 25 philosophical works. Plato’s writings are considered central to the field of philosophy and remain highly influential to this day. Plato’s teacher Socrates features as the protagonist in most of Plato’s works.
Get the entire Euthyphro LitChart as a printable PDF.
"My students can't get enough of your charts and their results have gone through the roof." -Graham S.
Download 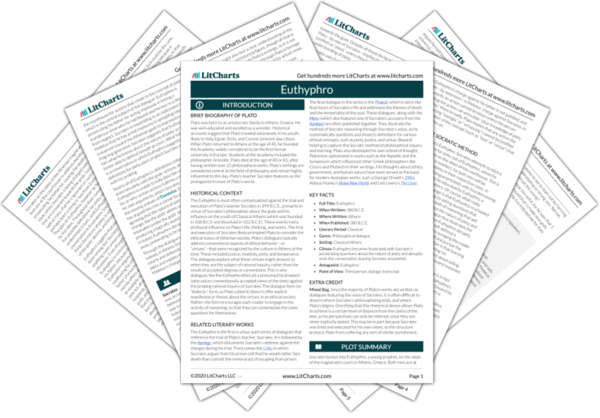 The Euthyphro is most often contextualized against the trial and execution of Plato’s teacher Socrates in 399 B.C.E., primarily in virtue of Socrates’s philosophies about the gods and his influence on the youth of Classical Athens (which was founded in 508 B.C.E and dissolved in 322 B.C.E). These events had a profound influence on Plato’s life, thinking, and works. The trial and execution of Socrates likely prompted Plato to consider the ethical status of Athenian society. Plato’s dialogues typically address conventional aspects of ethical behavior—or “virtues”—that were recognized by the culture in Athens at the time. These included justice, modesty, piety, and temperance. The dialogues explore what these virtues might amount to when they are the subject of rational inquiry, rather than the result of accepted dogmas or conventions. This is why dialogues like the Euthyphro often pit a presumed local expert (who voices conventionally accepted views of the time) against the probing rational inquiry of Socrates. The dialogue form (or “dialectic” form, as Plato called it) doesn’t offer explicit manifestos or theses about the virtues in an ethical society. Rather, the form encourages each reader to engage in the activity of reasoning, so that they can contemplate the same questions for themselves.

Other Books Related to Euthyphro

The Euthyphro is the first in a four-part series of dialogues that reference the trial of Plato’s teacher, Socrates. It is followed by the Apology, which documents Socrates’s defense against the charges during his trial. Third comes the Crito, in which Socrates argues from his prison cell that he would rather face death than commit the immoral act of escaping from prison. The final dialogue in the series is the Phaedo, which is set in the final hours of Socrates’s life and addresses the themes of death and the immortality of the soul. These dialogues, along with the Meno (which also features one of Socrates’s accusers from the Apology) are often published together. They illustrate the method of Socratic reasoning through Socrates’s voice, as he systematically questions and dissects definitions for various ethical concepts, such as piety, justice, and virtue. Beyond helping to capture the Socratic method of philosophical inquiry and learning, Plato also developed his own school of thought, Platonism, epitomized in works such as the Republic and the Symposium, which influenced other Greek philosophers like Cicero and Plutarch in their writings. His thoughts about ethics, government, and human nature have even served as the basis for modern dystopian works, such a George Orwell’s 1984, Aldous Huxley’s Brave New World, and Lois Lowry’s The Giver.
Key Facts about Euthyphro

Mixed Bag. Since the majority of Plato’s works are written as dialogues featuring the voice of Socrates, it is often difficult to discern where Socrates’s philosophizing ends, and where Plato’s begins. One thing that this rhetorical device allows Plato to achieve is a certain level of distance from the claims of the text, as his perspectives can only be inferred, since they are never explicitly stated. This may be in part because Socrates was tried and executed for his own views, so the structure protects Plato from suffering any sort of similar punishment. 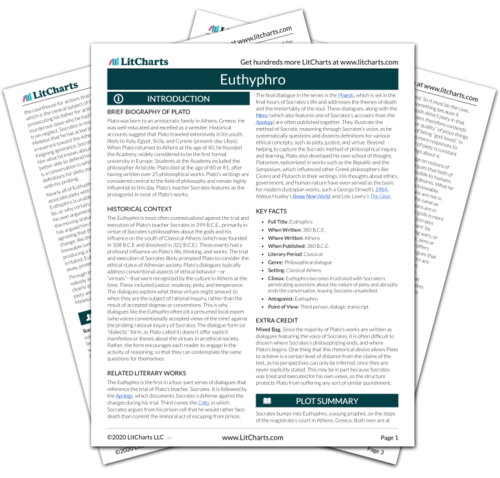 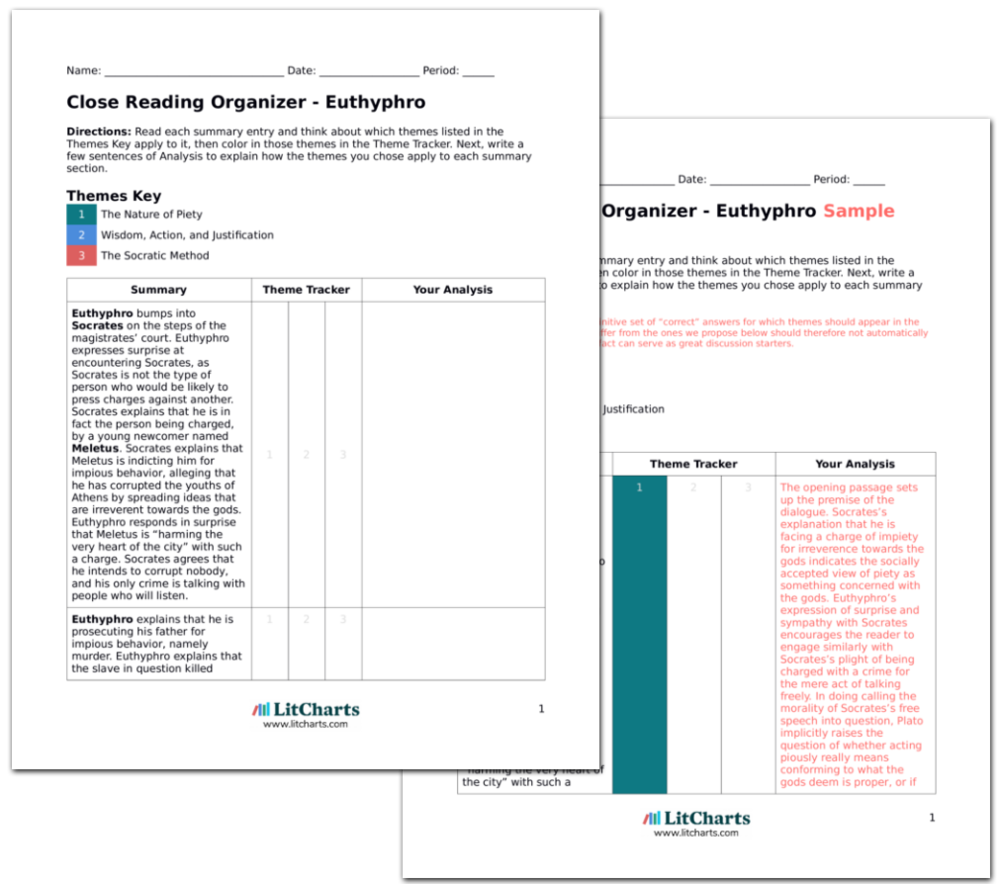