Download this LitChart! (PDF)
Teachers and parents! Struggling with distance learning? Our Teacher Edition on Crito can help.

Welcome to the LitCharts study guide on Plato's Crito. Created by the original team behind SparkNotes, LitCharts are the world's best literature guides.

A concise biography of Plato plus historical and literary context for Crito.

A quick-reference summary: Crito on a single page.

In-depth summary and analysis of every of Crito. Visual theme-tracking, too.

Explanations of Crito's symbols, and tracking of where they appear.

An interactive data visualization of Crito's plot and themes.

Plato was born to an aristocratic family in Athens in the violent era of the Peloponnesian War. Though initially inclined to take up a political career, he ultimately opted for philosophy, joining and participating in Socrates’ intellectual circle for roughly a decade until the latter’s execution. Some years later, he founded the Academy, the first philosophical school of its kind, in Athens. The institution became extremely influential, attracting many students, including Aristotle, who went on to enjoy illustrious careers. While practicing and teaching philosophy, Plato wrote an extensive series of philosophical dialogues featuring his old teacher, Socrates. While it is clear that these dialogues are at least partially meant to commemorate his mentor, it is equally clear that they served as vehicles for Plato to publicize and develop his own philosophy. For this reason, sifting Socrates’ thoughts from Plato’s is a complicated task. Though he generally avoided direct political engagement, Plato maintained a complicated relationship with the tyrants of Syracuse, attempting to train the tyrant Dionysus II to philosophically govern the state. By all indications, these experiments failed: the tyrant and the philosopher had a falling out, Dionysus was driven from power, and Plato kept his distance from politics afterwards. He died at an old age, handing over the Academy to his nephew Speusippus. The Academy remained active for many centuries.
Get the entire Crito LitChart as a printable PDF.
"My students can't get enough of your charts and their results have gone through the roof." -Graham S.
Download 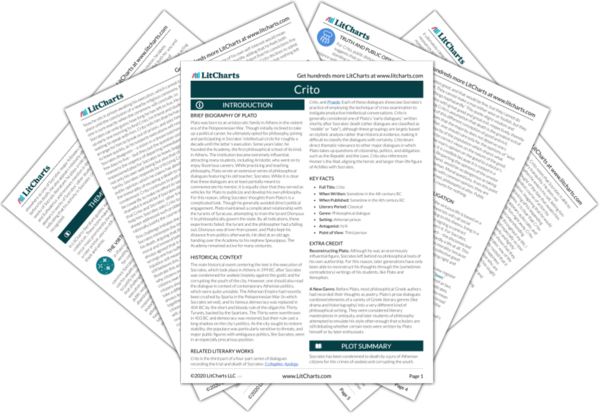 The main historical event centering the text is the execution of Socrates, which took place in Athens in 399 BC after Socrates was condemned for asebeia (impiety against the gods) and for corrupting the youth of the city. However, one should also read the dialogue in context of contemporary Athenian politics, which were quite unstable. The Athenian Empire had recently been crushed by Sparta in the Peloponnesian War (in which Socrates served), and its famous democracy was replaced in 404 BC by the short and bloody rule of the oligarchic Thirty Tyrants, backed by the Spartans. The Thirty were overthrown in 403 BC and democracy was restored, but their rule cast a long shadow on the city’s politics. As the city sought to restore stability, the populace was particularly sensitive to threats, and major public figures with ambiguous politics, like Socrates, were in an especially precarious position.

Other Books Related to Crito

Crito is the third part of a four-part series of dialogues recording the trial and death of Socrates: Euthyphro, Apology, Crito, and Phaedo. Each of these dialogues showcase Socrates’s practice of employing the technique of cross-examination to instigate productive intellectual conversations. Crito is generally considered one of Plato’s “early dialogues,” written shortly after Socrates’ death (other dialogues are classified as “middle” or “late”), although these groupings are largely based on stylistic analysis rather than historical evidence, making it difficult to classify the dialogues with certainty. Crito bears direct thematic relevance to other major dialogues in which Plato takes up questions of citizenship, politics, and obligation, such as the Republic and the Laws. Crito also references Homer’s the Iliad, aligning the heroic and larger-than-life figure of Achilles with Socrates.
Key Facts about Crito

Reconstructing Plato. Although he was an enormously influential figure, Socrates left behind no philosophical texts of his own authorship. For this reason, later generations have only been able to reconstruct his thoughts through the (sometimes contradictory) writings of his students, like Plato and Xenophon.

A New Genre. Before Plato, most philosophical Greek authors had recorded their thoughts as poetry. Plato’s prose dialogues combined elements of a variety of Greek literary genres (like drama and historiography) into a very different kind of philosophical writing. They were considered literary masterpieces in antiquity, and later students of philosophy attempted to emulate his style often enough that scholars are still debating whether certain texts were written by Plato himself or by later enthusiasts. 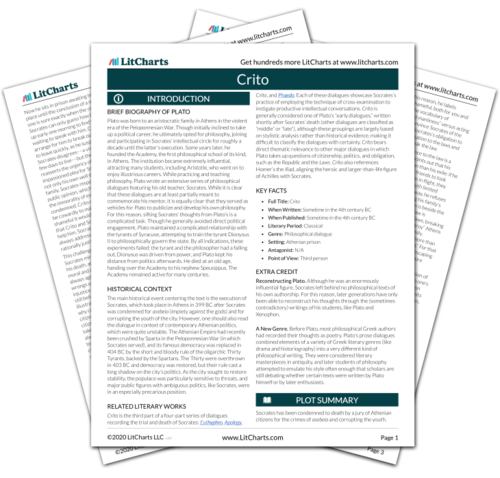 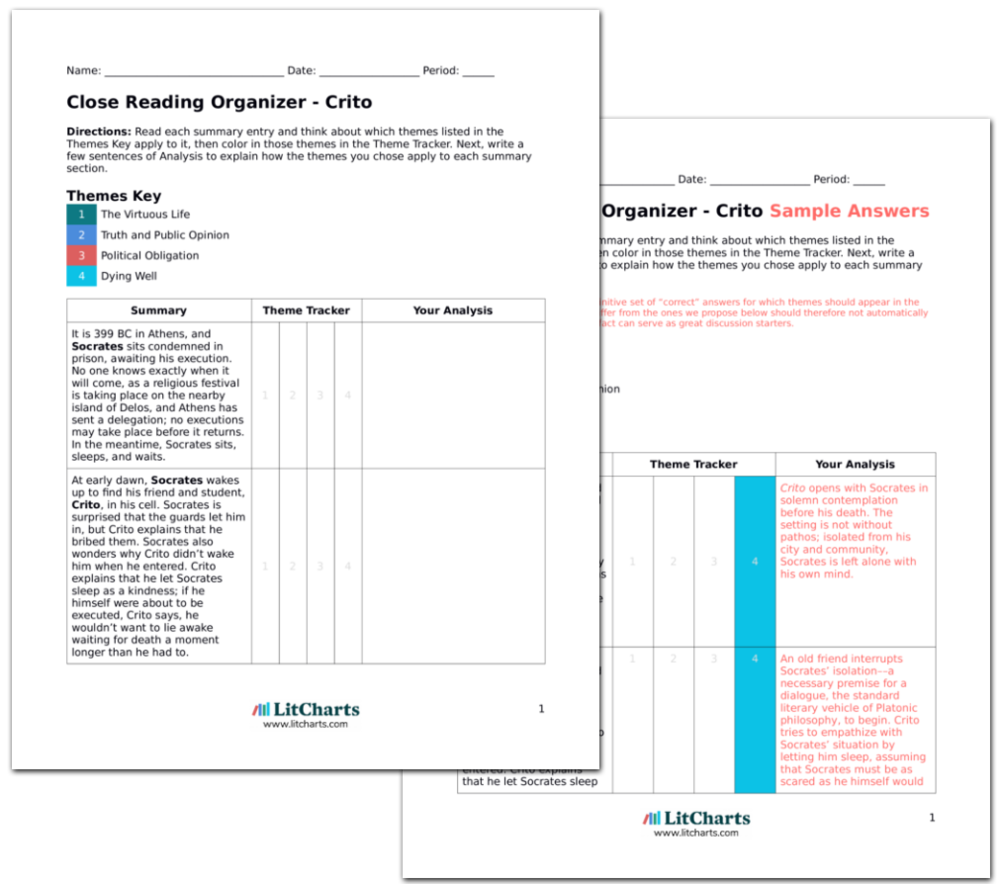