Download this LitChart! (PDF)
Teachers and parents! Struggling with distance learning? Our Teacher Edition on Phaedo can help.

Welcome to the LitCharts study guide on Plato's Phaedo. Created by the original team behind SparkNotes, LitCharts are the world's best literature guides.

A concise biography of Plato plus historical and literary context for Phaedo.

A quick-reference summary: Phaedo on a single page.

In-depth summary and analysis of every of Phaedo. Visual theme-tracking, too.

Explanations of Phaedo's symbols, and tracking of where they appear.

An interactive data visualization of Phaedo's plot and themes.

Plato’s father Ariston descended from Codrus, the last King of Athens, and his mother Perictione had ties to Solon, one of the creators of the Athenian Constitution. Plato planned a political career until 404 BCE, when Athens shifted to an oligarchy controlled by wealthy men. After democracy was restored in 403 BCE, Plato again considered politics until Socrates, Plato’s mentor, was accused of impiety and corruption and subsequently put to death in 399 BCE. Responding to this gross display of injustice, Plato abandoned politics for philosophy. He ultimately produced a volume of work that has heavily influenced Western thought and provided the world with a record not only of Plato’s own philosophical thoughts, but also historical documentation of Socrates’s influential years in Athens. Concerned with justice, beauty, metaphysics, and equality, Plato influenced many important thinkers by founding the Academy, a philosophy school where Aristotle was a student for twenty years. Aristotle then established his own institution when Plato died in 348 or 347 BCE.
Get the entire Phaedo LitChart as a printable PDF.
"My students can't get enough of your charts and their results have gone through the roof." -Graham S.
Download 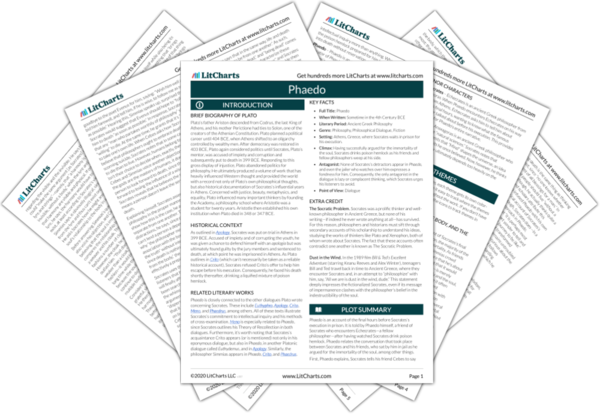 As outlined in Apology, Socrates was put on trial in Athens in 399 BCE. Accused of impiety and of corrupting the youth, he was given a chance to defend himself with an apologia but was ultimately found guilty by the jury members and sentenced to death, at which point he was imprisoned in Athens. As Plato outlines in Crito (which can’t necessarily be taken as a reliable historical account), Socrates refused Crito’s offer to help him escape before his execution. Consequently, he faced his death shortly thereafter, drinking a liquified mixture of poison hemlock.

Other Books Related to Phaedo

Phaedo is closely connected to the other dialogues Plato wrote concerning Socrates. These include Euthyphro, Apology, Crito, Meno, and Phaedrus, among others. All of these texts illustrate Socrates’s commitment to intellectual inquiry and his methods of cross-examination. Meno is especially related to Phaedo, since Socrates outlines his Theory of Recollection in both dialogues. Furthermore, it’s worth noting that Socrates’s acquaintance Crito appears (or is mentioned) not only in his eponymous dialogue, but also in Phaedo, in another Platonic dialogue called Euthydemus, and in Apology. Similarly, the philosopher Simmias appears in Phaedo, Crito, and Phaedrus.
Key Facts about Phaedo

The Socratic Problem. Socrates was a prolific thinker and well-known philosopher in Ancient Greece, but none of his writing—if indeed he ever wrote anything at all—has survived. For this reason, philosophers and historians must sift through secondary accounts of his scholarship to understand his ideas, studying the works of thinkers like Plato and Xenophon, both of whom wrote about Socrates. The fact that these accounts often contradict one another is known as The Socratic Problem.

Dust in the Wind. In the 1989 film Bill & Ted’s Excellent Adventure (starring Keanu Reeves and Alex Winter), teenagers Bill and Ted travel back in time to Ancient Greece, where they encounter Socrates and, in an attempt to “philosophize” with him, say, “All we are is dust in the wind, dude.” This statement deeply impresses the fictionalized Socrates, even if its message of impermanence clashes with the philosopher’s belief in the indestructibility of the soul. 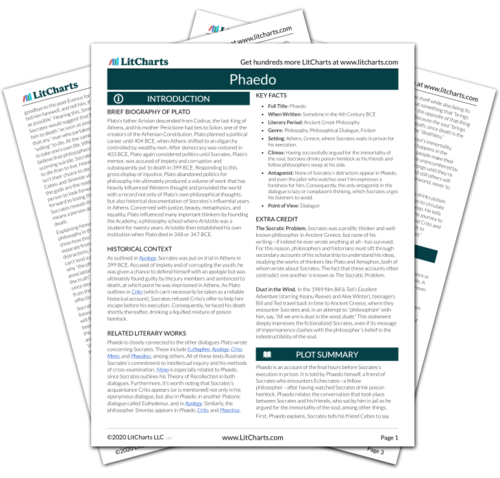 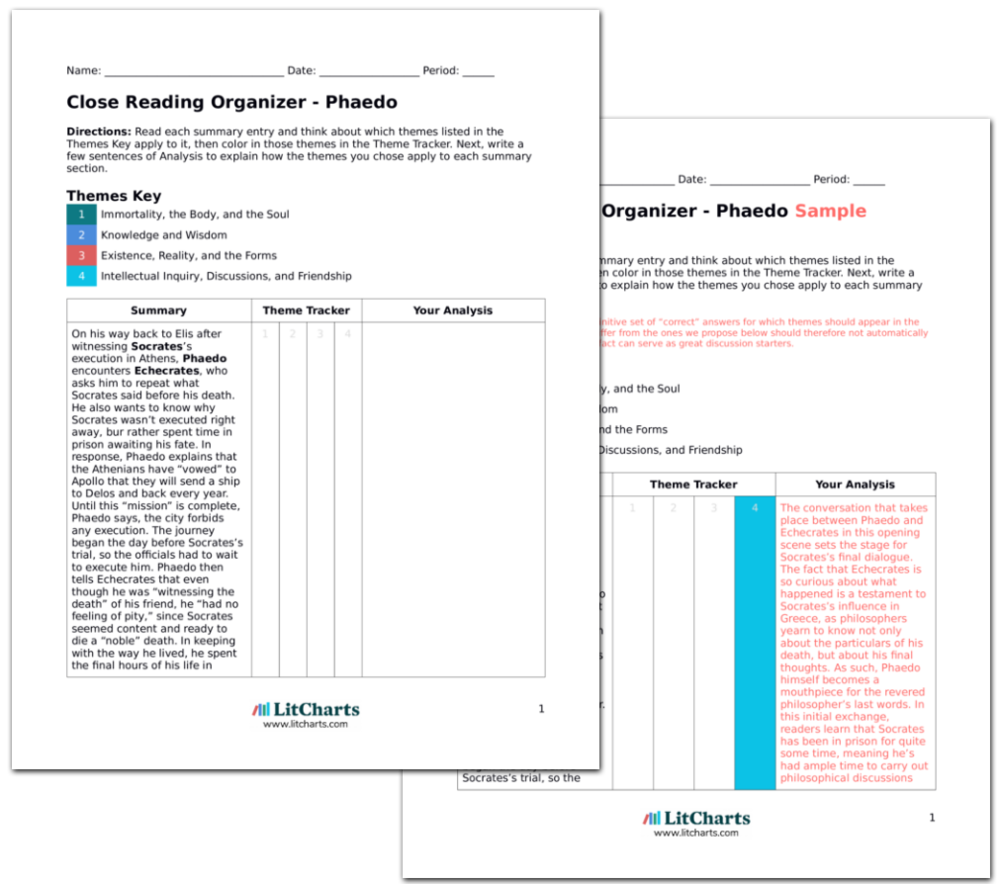