Download this LitChart! (PDF)
Teachers and parents! Struggling with distance learning? Our Teacher Edition on Gem of the Ocean can help.

Welcome to the LitCharts study guide on August Wilson's Gem of the Ocean. Created by the original team behind SparkNotes, LitCharts are the world's best literature guides.

Gem of the Ocean: Introduction

A concise biography of August Wilson plus historical and literary context for Gem of the Ocean.

Gem of the Ocean: Plot Summary

A quick-reference summary: Gem of the Ocean on a single page.

In-depth summary and analysis of every scene of Gem of the Ocean. Visual theme-tracking, too.

Gem of the Ocean: Themes

Explanations, analysis, and visualizations of Gem of the Ocean's themes.

Gem of the Ocean: Quotes

Gem of the Ocean's important quotes, sortable by theme, character, or scene.

Gem of the Ocean: Characters

Description, analysis, and timelines for Gem of the Ocean's characters.

Gem of the Ocean: Symbols

Explanations of Gem of the Ocean's symbols, and tracking of where they appear.

Gem of the Ocean: Theme Wheel

An interactive data visualization of Gem of the Ocean's plot and themes.

Wilson and his five siblings were raised in a poor, predominately Black neighborhood of Pittsburgh. After his mother and father divorced in the 1950s, Wilson and his family moved to Hazelwood—a mostly white, working-class section of Pittsburgh. They faced overt bigotry in this community, as racist white people threw bricks through the windows of the Wilsons’ new home. Wilson himself dropped out of high school during his sophomore year because he was falsely accused of plagiarizing an essay about Napoleon I. At this point, he started working odd jobs and made great use of Pittsburgh’s Carnegie Library, which eventually gave him an honorary high school diploma because of how much time he spent reading in the stacks. Best known for his plays Fences, The Piano Lesson, Joe Turner’s Come and Gone, and Ma Rainey’s Black Bottom, Wilson once said that his work was most influenced by “four B’s”: blues music, the writers Jorge Luis Borges and Amiri Baraka, and the painter Romare Bearden. Wilson wrote 16 plays, 10 of which make up what’s known as his Pittsburgh Cycle—a cycle in which nine of the ten plays take place in the Pittsburgh’s Hill District. Wilson died in Seattle at the age of 60, leaving behind a legacy as one of most important playwrights of the 20th century.
Get the entire Gem of the Ocean LitChart as a printable PDF.
"My students can't get enough of your charts and their results have gone through the roof." -Graham S.
Download 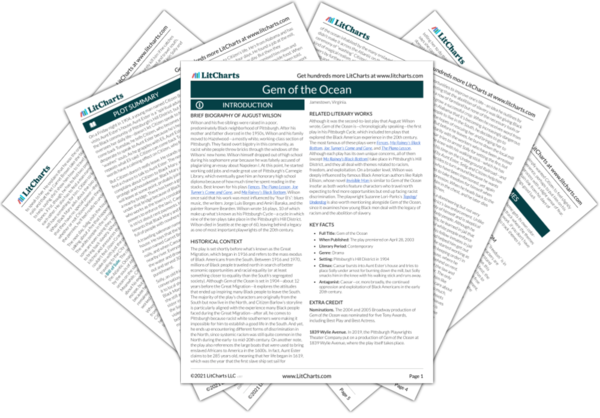 Historical Context of Gem of the Ocean

The play is set shortly before what’s known as the Great Migration, which began in 1916 and refers to the mass exodus of Black Americans from the South. Between 1916 and 1970, millions of Black people traveled north in search of better economic opportunities and racial equality (or at least something closer to equality than the South’s segregated society). Although Gem of the Ocean is set in 1904—about 12 years before the Great Migration—it explores the attitudes that ended up inspiring many Black people to leave the South. The majority of the play’s characters are originally from the South but now live in the North, and Citizen Barlow’s storyline is particularly aligned with the experience many Black people faced during the Great Migration—after all, he comes to Pittsburgh because racist white southerners were making it impossible for him to establish a good life in the South. And yet, he ends up encountering different forms of discrimination in the North, since systemic racism was still quite common in the North during the early- to mid-20th century. On another note, the play also references the large boats that were used to bring enslaved Africans to America in the 1600s. In fact, Aunt Ester claims to be 285 years old, meaning that her life began in 1619, which was the year that the first slave ship set sail for Jamestown, Virginia.

Other Books Related to Gem of the Ocean

Although it was the second-to-last play that August Wilson wrote, Gem of the Ocean is—chronologically speaking—the first play in his Pittsburgh Cycle, which included ten plays that explored the Black American experience in the 20th century. The most famous of these plays were Fences, Ma Rainey’s Black Bottom, Joe Turner’s Come and Gone, and The Piano Lesson. Although each play has its own unique concerns, all of them (except Ma Rainey’s Black Bottom) take place in Pittsburgh’s Hill District, and they all deal with themes related to racism, freedom, and exploitation. On a broader level, Wilson was deeply influenced by famous Black American authors like Ralph Ellison, whose novel Invisible Man is similar to Gem of the Ocean insofar as both works feature characters who travel north expecting to find more opportunities but end up facing racist discrimination. The playwright Suzanne Lori-Parks’s Topdog/Underdog is also worth mentioning alongside Gem of the Ocean, since it examines how young Black men deal with the legacy of racism and the abolition of slavery.
Key Facts about Gem of the Ocean

Extra Credit for Gem of the Ocean

Nominations. The 2004 and 2005 Broadway production of Gem of the Ocean was nominated for five Tony Awards, including Best Play and Best Actress. 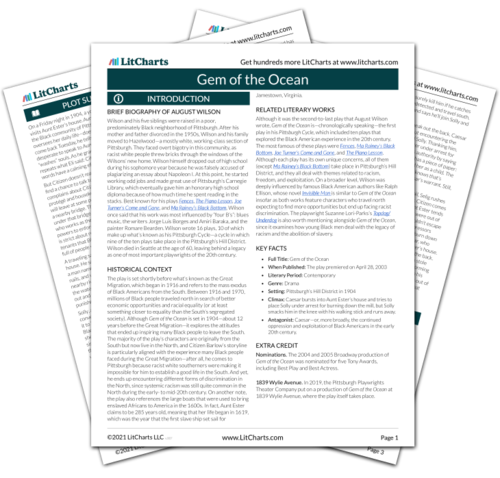 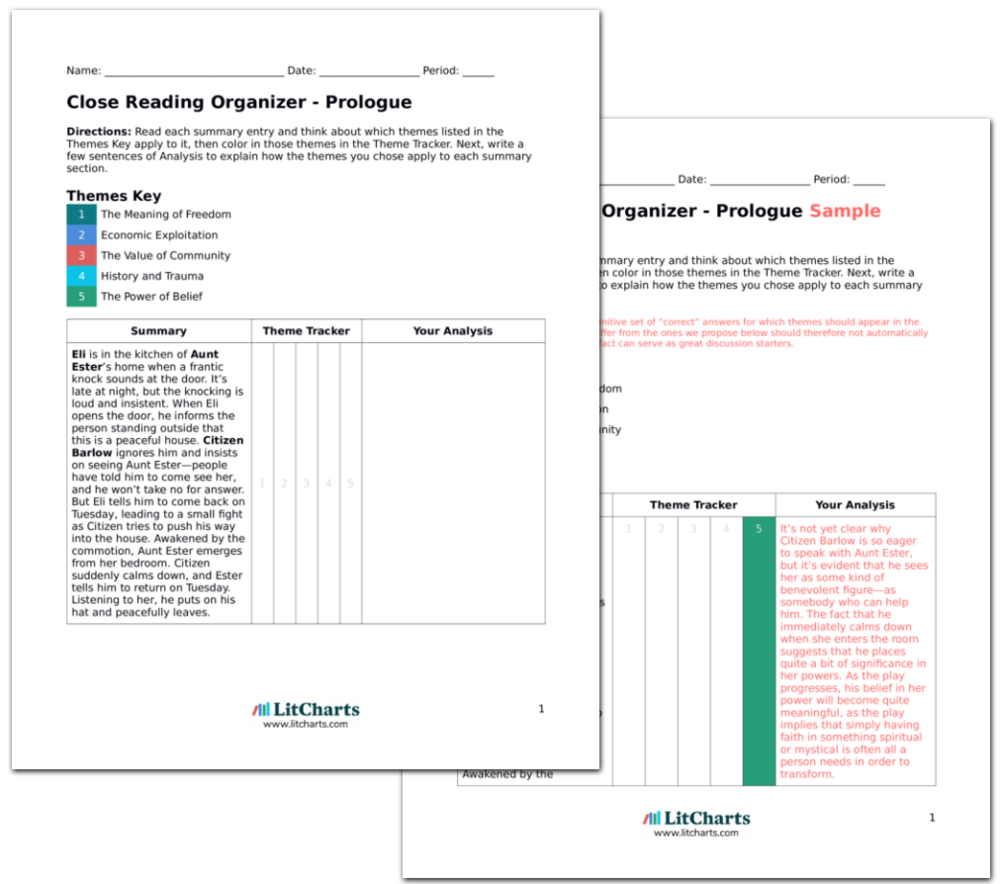