Download this LitChart! (PDF)
Teachers and parents! Struggling with distance learning? Our Teacher Edition on In Custody can help.

Welcome to the LitCharts study guide on Anita Desai's In Custody. Created by the original team behind SparkNotes, LitCharts are the world's best literature guides.

A concise biography of Anita Desai plus historical and literary context for In Custody.

A quick-reference summary: In Custody on a single page.

In-depth summary and analysis of every chapter of In Custody. Visual theme-tracking, too.

Explanations, analysis, and visualizations of In Custody's themes.

In Custody's important quotes, sortable by theme, character, or chapter.

Description, analysis, and timelines for In Custody's characters.

Explanations of In Custody's symbols, and tracking of where they appear.

An interactive data visualization of In Custody's plot and themes.

Born to a Bengali father and a German mother in the hill station of Mussoorie, Anita Desai grew up in New Delhi, where she learned German and Bengali at home, Hindi and Urdu in the streets, and English in school. She began writing stories at just seven years old—she even illustrated them and learned to bind them together into books, which she gave to her family members as gifts. Her earliest and strongest literary influences were mainly Western novelists like Virginia Woolf and Henry James—she has cited Emily Brontë’s Wuthering Heights as one of her favorite books as a child. Desai also remembers how Old Delhi rioted and many of her schoolmates left as refugees when India and Pakistan became separate, independent nations in the Partition of 1947. She studied English literature at the University of Delhi and graduated in 1957. The next year, she moved to Kolkata, married the businessman Ashvin Desai, and co-founded the Writers Workshop publishing company with several other Indian authors. She began publishing novels in the early 1960s and has not stopped since. But her most productive period was between 1974 and 1984, when she published eight novels—including her autobiographical 1980 novel Clear Light of Day and In Custody, which were both finalists for the prestigious Booker Prize and launched her to international prominence. In fact, she was a finalist for the prize a third time in 1999 for Fasting, Feasting; because the jury was bitterly divided over whether to award the prize to Desai or to its eventual winner, J.M. Coetzee’s Disgrace, it took the unusual step of naming Fasting, Feasting as a runner-up. Desai has also won India’s two highest literary awards, the Sahitya Akademi Award and the Sahitya Akademi Fellowship, as well as its third-highest award for civilians in general, the Padma Bhushan. In addition to the Indian cities of Delhi, Mumbai, Kolkata, Chandigarh, and Pune, Desai has also lived in England, the U.S., and Mexico. Since the 1990s, she has taught at several universities in the northeastern United States (most recently M.I.T.). Her daughter Kiran Desai is also a noted novelist best known for The Inheritance of Loss (2006).
Get the entire In Custody LitChart as a printable PDF.
"My students can't get enough of your charts and their results have gone through the roof." -Graham S.
Download 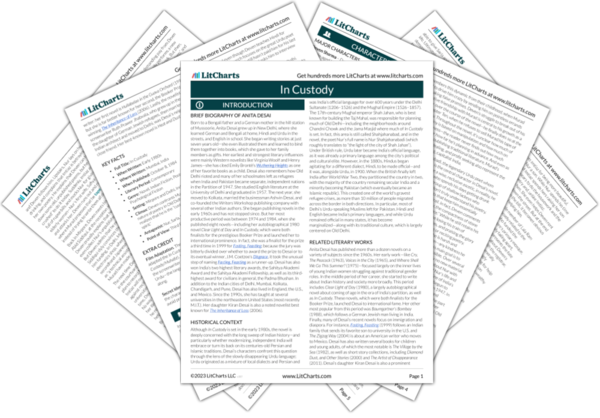 Historical Context of In Custody

Although In Custody is set in the early 1980s, the novel is deeply concerned with the long sweep of Indian history—and particularly whether modernizing, independent India will embrace or turn its back on its centuries-old Persian and Islamic traditions. Desai’s characters confront this question through the lens of the slowly disappearing Urdu language; Urdu originated as a mixture of local dialects and Persian and was India’s official language for over 600 years under the Delhi Sultanate (1206–1526) and the Mughal Empire (1526–1857). The 17th-century Mughal emperor Shah Jahan, who is best known for building the Taj Mahal, was responsible for planning much of Old Delhi—including the neighborhoods around Chandni Chowk and the Jama Masjid where much of In Custody is set. In fact, this area is still called Shahjahanabad, and in the novel, the poet Nur’s full name is Nur Shahjahanabadi (which roughly translates to “the light of the city of Shah Jahan”). Under British rule, Urdu later became India’s official language, as it was already a primary language among the city’s political and cultural elite. However, in the 1880s, Hindus began agitating for a different dialect, Hindi, to be made official—and it was, alongside Urdu, in 1900. When the British finally left India after World War Two, they partitioned the country in two, with the majority of the country remaining secular India and a minority becoming Pakistan (which eventually became an Islamic republic). This created one of the world's gravest refugee crises, as more than 10 million of people migrated across the border in both directions. In particular, most of Delhi’s Urdu-speaking Muslims left for Pakistan. Hindi and English became India’s primary languages, and while Urdu remained official in many states, it has become marginalized—along with its traditional culture, which is largely centered on Old Delhi.

Other Books Related to In Custody

Anita Desai has published more than a dozen novels on a variety of subjects since the 1960s. Her early work—like Cry, The Peacock (1963), Voices in the City (1965), and Where Shall We Go This Summer? (1975)—focused largely on the inner lives of young Indian women struggling against traditional gender roles. In the middle period of her career, she started to write about Indian history and society more broadly. This period includes Clear Light of Day (1980), a largely autobiographical novel about coming of age in the era of India’s partition, as well as In Custody. These novels, which were both finalists for the Booker Prize, launched Desai to international fame. Her other most popular from this period was Baumgartner’s Bombay (1988), which follows a German Jewish man living in India. Finally, many of Desai’s recent novels focus on immigration and diaspora. For instance, Fasting, Feasting (1999) follows an Indian family that sends its favorite son to university in the U.S. and The Zigzag Way (2004) is about an American writer who moves to Mexico. Desai has also written several books for children and young adults, of which the most notable is The Village by the Sea (1982), as well as short story collections, including Diamond Dust, and Other Stories (2000) and The Artist of Disappearance (2011). Desai’s daughter Kiran Desai is also a prominent writer: her first novel is Hullabaloo in the Guava Orchard (1998), but she is far better known for her second, the Booker Prize-winning The Inheritance of Loss (2006). Lastly, the novelist and screenwriter Ruth Prawer Jhabvala, who grew up in the UK as the daughter of German Jewish refugees, then married an Indian architect and moved to Delhi, was Desai’s neighbor and close friend. Her best-known novel is Heat and Dust (1975).
Key Facts about In Custody

Extra Credit for In Custody

Film Adaptation. The prominent director Ismail Merchant adapted the In Custody into an award-winning 1993 film (In Custody/Muhafiz). Ironically, because Desai’s novel is in English, the screenwriter had to translate the poet Nur’s verses into Urdu—the language that he was supposed to be writing in all along.

Secret Identity. Anita Desai has admitted in an interview that the character of Nur is based on a real-life Urdu poet—but to avoid provocation and controversy, she refuses to say who it is. 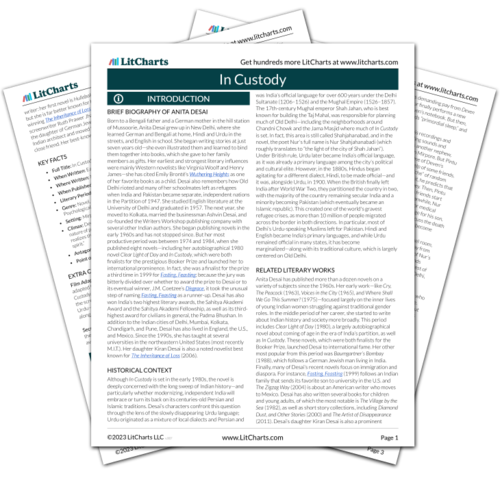 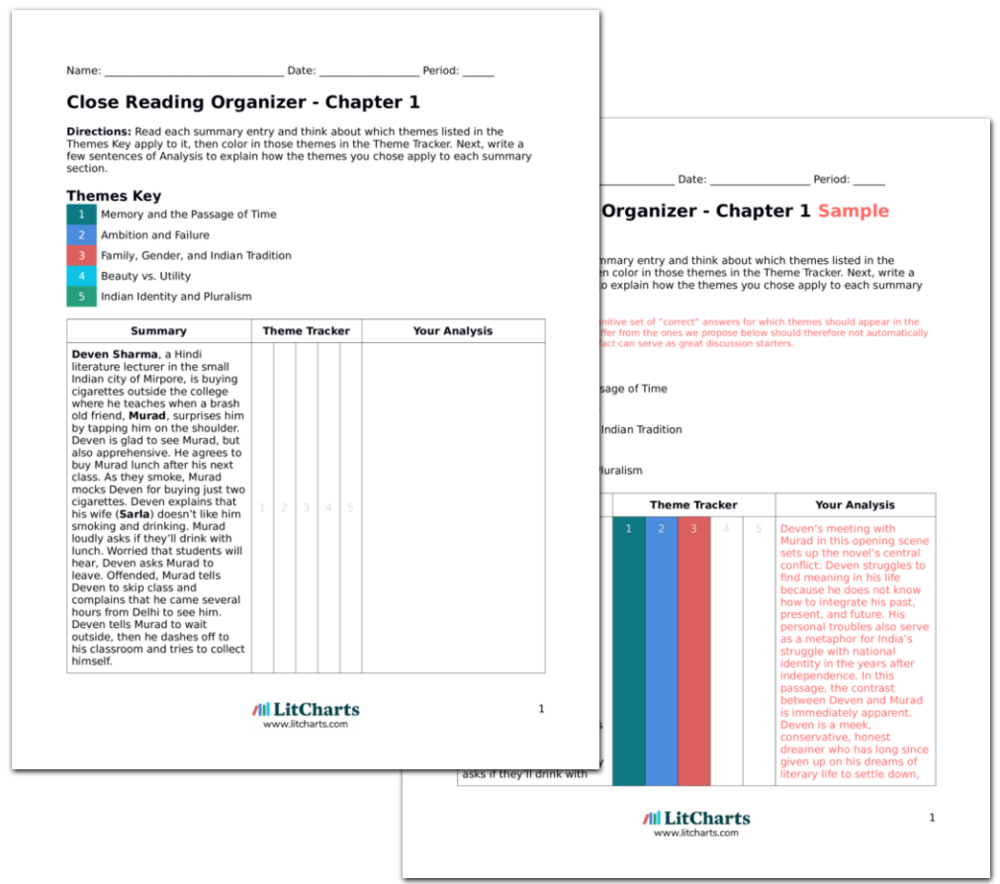