Download this LitChart! (PDF)
Teachers and parents! Struggling with distance learning? Our Teacher Edition on Love That Dog can help.

Welcome to the LitCharts study guide on Sharon Creech's Love That Dog. Created by the original team behind SparkNotes, LitCharts are the world's best literature guides.

A concise biography of Sharon Creech plus historical and literary context for Love That Dog.

A quick-reference summary: Love That Dog on a single page.

In-depth summary and analysis of every of Love That Dog. Visual theme-tracking, too.

Explanations, analysis, and visualizations of Love That Dog's themes.

Love That Dog's important quotes, sortable by theme, character, or .

Description, analysis, and timelines for Love That Dog's characters.

Explanations of Love That Dog's symbols, and tracking of where they appear.

An interactive data visualization of Love That Dog's plot and themes.

Sharon Creech was born in South Euclid, Ohio, which is a suburb of Cleveland. She grew up in a large family—in fact, the character Mary Lou Finney’s brothers in Creech’s books Walk Two Moons and Absolutely Normal Chaos are named after and based off Creech’s brothers. Throughout her childhood, her parents regularly took the family on road trips, once all the way to Idaho. It wasn’t until college that Creech discovered literature and writing. She taught high school English and writing courses in England and Switzerland and eventually began writing her own novels for adults. But since writing her third book and her first book for kids, Absolutely Normal Chaos, Creech has written mostly for young readers. Creech and her husband have lived in England and the United States. She and her husband returned to the United States in 1998 and currently live in Maine.
Get the entire Love That Dog LitChart as a printable PDF.
"My students can't get enough of your charts and their results have gone through the roof." -Graham S.
Download 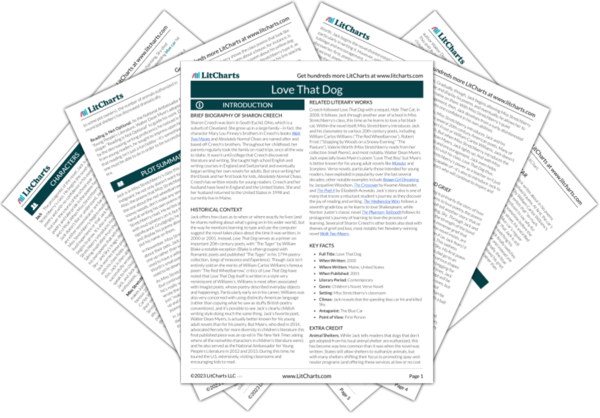 Historical Context of Love That Dog

Jack offers few clues as to when or where exactly he lives (and he shares nothing about what’s going on in his wider world), but the way he mentions learning to type and use the computer suggest the novel takes place about the time it was written, in 2000 or 2001. Instead, Love That Dog serves as a primer on important 20th-century poets, with “The Tyger” by William Blake a notable exception (Blake is often grouped with Romantic poets and published “The Tyger” in his 1794 poetry collection, Songs of Innocence and Experience). Though Jack isn’t entirely sold on the merits of William Carlos Williams’s famous poem “The Red Wheelbarrow,” critics of Love That Dog have noted that Love That Dog itself is written in a style very reminiscent of Williams’s. Williams is most often associated with Imagist poets, whose poetry described everyday objects and happenings. Particularly early on in his career, Williams was also very concerned with using distinctly American language (rather than copying what he saw as stuffy British poetry conventions), and it’s possible to see Jack’s clearly childish writing style doing much the same thing. Jack’s favorite poet, Walter Dean Myers, is actually better known for his young adult novels than for his poetry. But Myers, who died in 2014, advocated fiercely for more diversity in children’s literature (his final published piece was an op-ed in The New York Times asking where all the nonwhite characters in children’s literature were), and he also served as the National Ambassador for Young People’s Literature in 2012 and 2013. During this time, he toured the U.S. extensively, visiting classrooms and encouraging kids to read.

Other Books Related to Love That Dog

Creech followed Love That Dog with a sequel, Hate That Cat, in 2008. It follows Jack through another year of school in Miss Stretchberry’s class, this time as he learns to love a fat black cat. Within the novel itself, Miss Stretchberry introduces Jack and his classmates to various 20th-century poets, including William Carlos Williams (“The Red Wheelbarrow”), Robert Frost (“Stopping by Woods on a Snowy Evening,” “The Pasture”), Valerie Worth (Miss Stretchberry reads from her collection Small Poems), and most notably, Walter Dean Myers. Jack especially loves Myers’s poem “Love That Boy,” but Myers is better known for his young adult novels like Monster and Scorpions. Verse novels, particularly those intended for young readers, have exploded in popularity over the last several decades; other notable examples include Brown Girl Dreaming by Jacqueline Woodson, The Crossover by Kwame Alexander, and The Poet X by Elizabeth Acevedo. Jack’s story also is one of many that traces a reluctant student’s journey as they discover the joy of reading and writing. The Wednesday Wars follows a seventh-grade boy as he learns to love Shakespeare, while Norton Juster’s classic novel The Phantom Tollbooth follows its protagonist’s journey of learning to love the process of learning. Several of Sharon Creech’s other books also deal with themes of grief and loss, most notably her Newbery-winning novel Walk Two Moons.
Key Facts about Love That Dog

Extra Credit for Love That Dog

Animal Shelters. While Jack tells readers that dogs that don’t get adopted from his local animal shelter are euthanized, this has become way less common than it was when the novel was written. States still allow shelters to euthanize animals, but with many shelters shifting their focus to promoting spay-and-neuter programs (and offering these services at low or no cost to some pet owners), the number of animals euthanized in municipal shelters has decreased dramatically.

Reading is Not Optional. As the National Ambassador for Young People’s Literature, Walter Dean Myers adopted the slogan “Reading is Not Optional” to guide his work. Disturbed by the decreasing writing proficiency he noticed in fan mail from young readers, he sought to impress upon his audiences that reading isn’t just a fun hobby—it’s something, he believed, one must be able to do in order to be successful in the modern era. 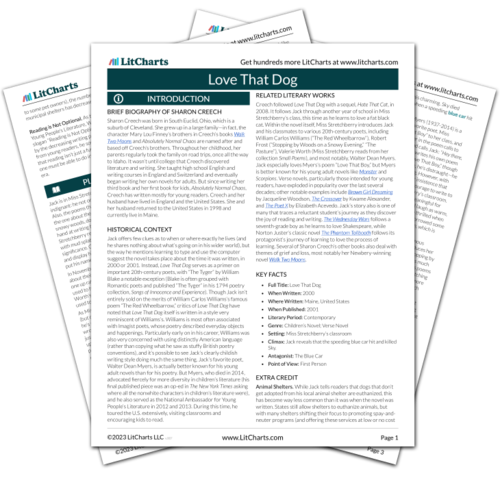 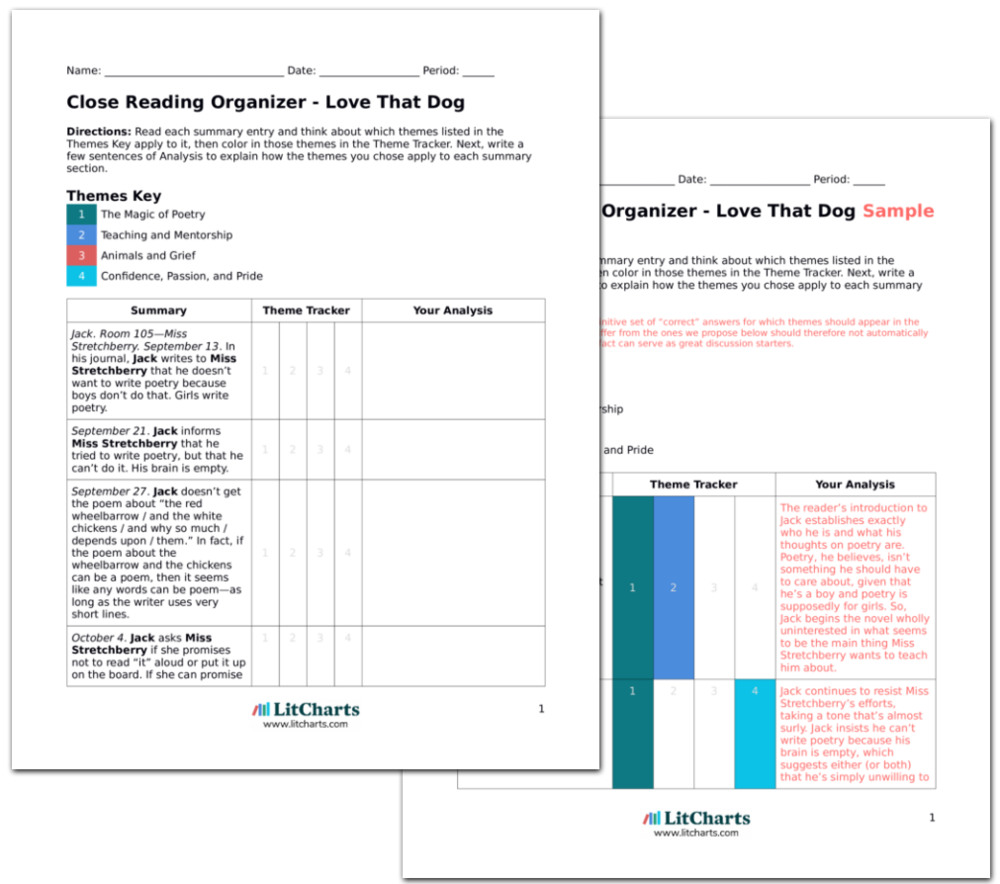