Welcome to the LitCharts study guide on Norton Juster's The Phantom Tollbooth. Created by the original team behind SparkNotes, LitCharts are the world's best literature guides.

A concise biography of Norton Juster plus historical and literary context for The Phantom Tollbooth.

A quick-reference summary: The Phantom Tollbooth on a single page.

In-depth summary and analysis of every chapter of The Phantom Tollbooth. Visual theme-tracking, too.

Explanations, analysis, and visualizations of The Phantom Tollbooth's themes.

Description, analysis, and timelines for The Phantom Tollbooth's characters.

Explanations of The Phantom Tollbooth's symbols, and tracking of where they appear.

An interactive data visualization of The Phantom Tollbooth's plot and themes.

Juster was born in Brooklyn, New York, to Jewish immigrant parents. Like his father, he pursued a career in architecture. He joined the Navy in the mid-1950s as a young man. While in the Navy, Juster began doing small watercolors of fantastical creatures and writing in his downtime—though he was asked to stop. During these years, he wrote a children’s book that was never published. The Phantom Tollbooth came about when Juster received a grant to write a children’s book on urban planning. Instead, inspired by his own experiences as a kid and a conversation with a child at a restaurant about what the biggest number is, Juster wrote The Phantom Tollbooth. The book’s illustrator, Jules Feiffer, lived in the apartment below Juster’s. Feiffer’s girlfriend was the one to take Tollbooth to a publisher. Despite the fact that The Phantom Tollbooth has been considered a classic for decades (and the fact that Juster also wrote the wildly popular picture book The Dot and the Line, which was adapted into a 10-minute short by Chuck Jones of Looney Tunes fame), Juster mostly focused on his architecture career. He taught architecture at Hampshire College and also cofounded an architecture firm. Juster died in March of 2021 of complications related to a stroke.
Get the entire The Phantom Tollbooth LitChart as a printable PDF.
"My students can't get enough of your charts and their results have gone through the roof." -Graham S.
Download 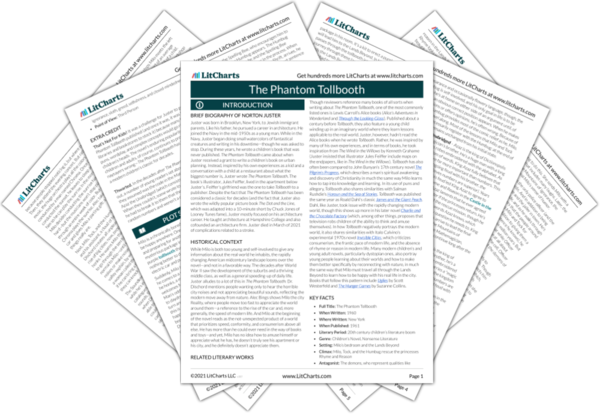 Historical Context of The Phantom Tollbooth

While Milo is both too young and self-involved to give any information about the real world he inhabits, the rapidly changing American midcentury landscape looms over the novel—and not in a favorable way. The decades after World War II saw the development of the suburbs and a thriving middle class, as well as a general speeding-up of daily life. Juster alludes to a lot of this in The Phantom Tollbooth: Dr. Dischord mentions people wanting only to hear the horrible city noises and not appreciating beautiful sounds, reflecting the modern move away from nature. Alec Bings shows Milo the city Reality, where people move too fast to appreciate the world around them—a reference to the rise of the car and, more generally, the speed of modern life. And Milo at the beginning of the novel reads as the not-unexpected product of a world that prioritizes speed, conformity, and consumerism above all else. He has more than he could ever need in the way of books and toys—and yet, Milo has no idea how to amuse himself or appreciate what he has, he doesn’t truly see his apartment or his city, and he definitely doesn’t appreciate them.

Other Books Related to The Phantom Tollbooth

Though reviewers reference many books of all sorts when writing about The Phantom Tollbooth, one of the most commonly listed ones is Lewis Carroll’s Alice books (Alice’s Adventures in Wonderland and Through the Looking-Glass). Published about a century before Tollbooth, they also feature a young child winding up in an imaginary world where they learn lessons applicable to the real world. Juster, however, hadn’t read the Alice books when he wrote Tollbooth. Rather, he was inspired by many of his own experiences, and in terms of books, he took inspiration from The Wind in the Willows by Kenneth Grahame (Juster insisted that illustrator Jules Feiffer include maps on the endpapers, like in The Wind in the Willows). Tollbooth has also often been compared to John Bunyan’s 17th century novel The Pilgrim’s Progress, which describes a man’s spiritual awakening and discovery of Christianity in much the same way Milo learns how to tap into knowledge and learning. In its use of puns and allegory, Tollbooth also shares similarities with Salman Rushdie’s Haroun and the Sea of Stories. Tollbooth was published the same year as Roald Dahl’s classic James and the Giant Peach. Dahl, like Juster, took issue with the rapidly changing modern world, though this shows up more in his later novel Charlie and the Chocolate Factory (which, among other things, proposes that television robs children of the ability to think and amuse themselves). In how Tollbooth negatively portrays the modern world, it also shares similarities with Italo Calvino’s experimental 1970s novel Invisible Cities, which criticizes consumerism, the frantic pace of modern life, and the absence of rhyme or reason in modern life. Many modern children’s and young adult novels, particularly dystopian ones, also portray young people learning about their worlds and how to make them better specifically by reconnecting with nature, in much the same way that Milo must travel all through the Lands Beyond to learn how to be happy with his real life in the city. Books that follow this pattern include Uglies by Scott Westerfeld and The Hunger Games by Suzanne Collins.
Key Facts about The Phantom Tollbooth

Extra Credit for The Phantom Tollbooth

That’s Not For Kids! It was a challenge for Juster to get The Phantom Tollbooth published (and once it was, it was hard to get libraries and bookstores to stock it) because many believed its puns, wordplay, and complex concepts would go right over children’s heads. The novel’s enduring popularity among children and adults, of course, continues to prove early naysayers wrong—The Phantom Tollbooth has been considered a modern children’s classic for decades.

Thwarted. In the decades after The Phantom Tollbooth came out, a number of young readers set about trying to crack what they assumed was the code in the Mathemagician’s letter to Azaz the Unabridged (which consists entirely of numbers). When they couldn’t, some wrote to Juster asking for help—and he had to break it to them that the numbers were truly just random numbers and weren’t a code at all. 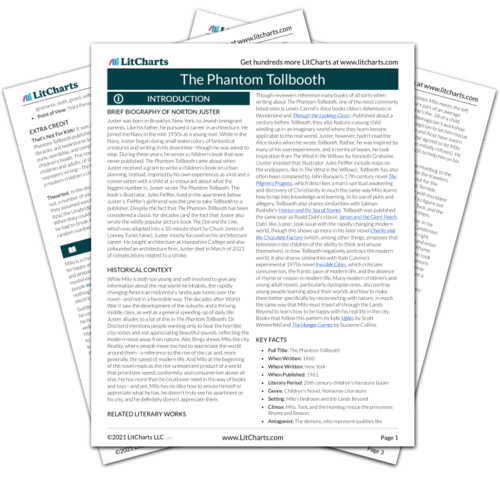 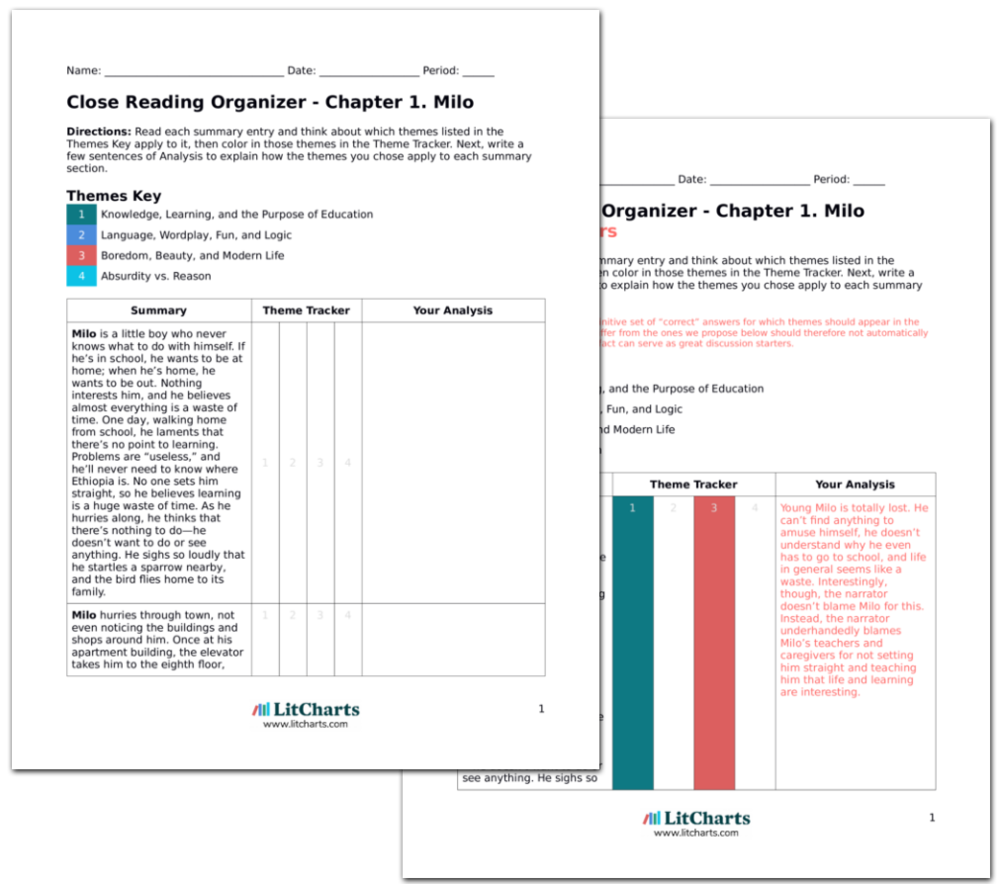