Download this LitChart! (PDF)
Teachers and parents! Struggling with distance learning? Our Teacher Edition on The Poet X can help.

Welcome to the LitCharts study guide on Elizabeth Acevedo's The Poet X. Created by the original team behind SparkNotes, LitCharts are the world's best literature guides.

A concise biography of Elizabeth Acevedo plus historical and literary context for The Poet X.

A quick-reference summary: The Poet X on a single page.

In-depth summary and analysis of every part of The Poet X. Visual theme-tracking, too.

Explanations, analysis, and visualizations of The Poet X's themes.

Description, analysis, and timelines for The Poet X's characters.

Explanations of The Poet X's symbols, and tracking of where they appear.

An interactive data visualization of The Poet X's plot and themes.

Elizabeth Acevedo was born in New York to Dominican parents. She’s the youngest child and only girl in her family. At age 14, Acevedo participated in one of her first slam poetry events at the Nuyorican Poets Cafe and went on to perform at a number of open mic events around the city. She later earned a BA in performing arts from George Washington University and an MFA from the University of Maryland. Since graduating, she’s taught poetry to teens in a variety of settings, as well as eighth grade English. The Poet X is her first novel, and part of her inspiration for writing it was spending time with teen girls who didn’t see themselves reflected in classic literature or in novels commonly taught in schools. All of her published works have won numerous awards and she’s also been recognized for her spoken word poetry. She lives in Washington, DC with her partner.
Get the entire The Poet X LitChart as a printable PDF.
"My students can't get enough of your charts and their results have gone through the roof." -Graham S.
Download 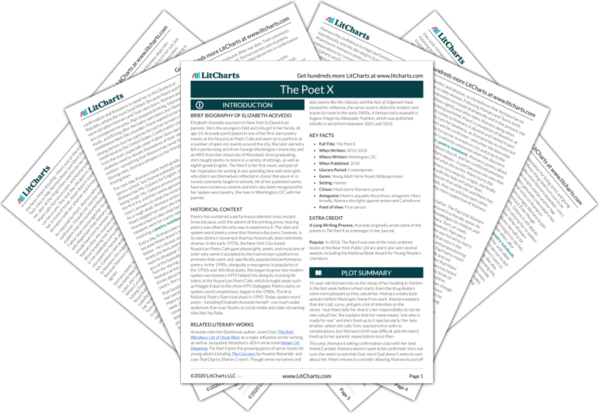 Historical Context of The Poet X

Poetry has contained a performance element since ancient times because, until the advent of the printing press, hearing poetry was often the only way to experience it. The slam and spoken word poetry scene that Xiomara discovers, however, is its own distinct movement that has historically been extremely diverse. In the early 1970s, the New York City-based Nuyorican Poets Cafe gave playwrights, poets, and musicians of color who weren’t accepted by the mainstream a platform to promote their work and, specifically, popularized performance poetry. In the 1990s, alongside a resurgence in popularity of the 1950s and ‘60s Beat poets, this began to grow into modern spoken word poetry. MTV helped this along by scouting for talent at the Nuyorican Poets Cafe, which brought poets such as Maggie Estep to the show MTV Unplugged. Poetry slams, or spoken word competitions, began in the 1980s. The first National Poetry Slam took place in 1990. Today, spoken word poets—including Elizabeth Acevedo herself—can reach wider audiences than ever thanks to social media and video streaming sites like YouTube.

Other Books Related to The Poet X

Acevedo cites the Dominican author Junot Díaz (The Brief Wondrous Life of Oscar Wao) as a major influence on her writing, as well as Jacqueline Woodson’s 2014 verse novel Brown Girl Dreaming. The Poet X joins the growing genre of verse novels for young adults including The Crossover by Kwame Alexander and Love That Dog by Sharon Creech. Though verse narratives and epic poems like the Odyssey and the Epic of Gilgamesh have existed for millennia, the verse novel is distinctly modern and traces its roots to the early 1800s. A famous early example is Eugene Onegin by Alexander Pushkin, which was published initially in serial form between 1825 and 1832.
Key Facts about The Poet X

Extra Credit for The Poet X

A Long Writing Process. Acevedo originally wrote some of the poems in The Poet X as a teenager in her journal.

Popular. In 2018, The Poet X was one of the most-ordered books at the New York Public Library and it also won several awards, including the National Book Award for Young People’s Literature. 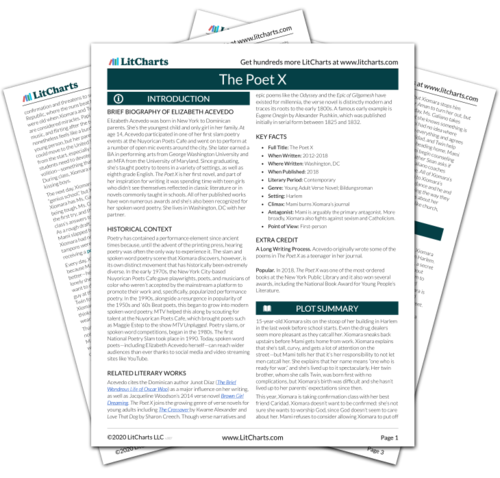 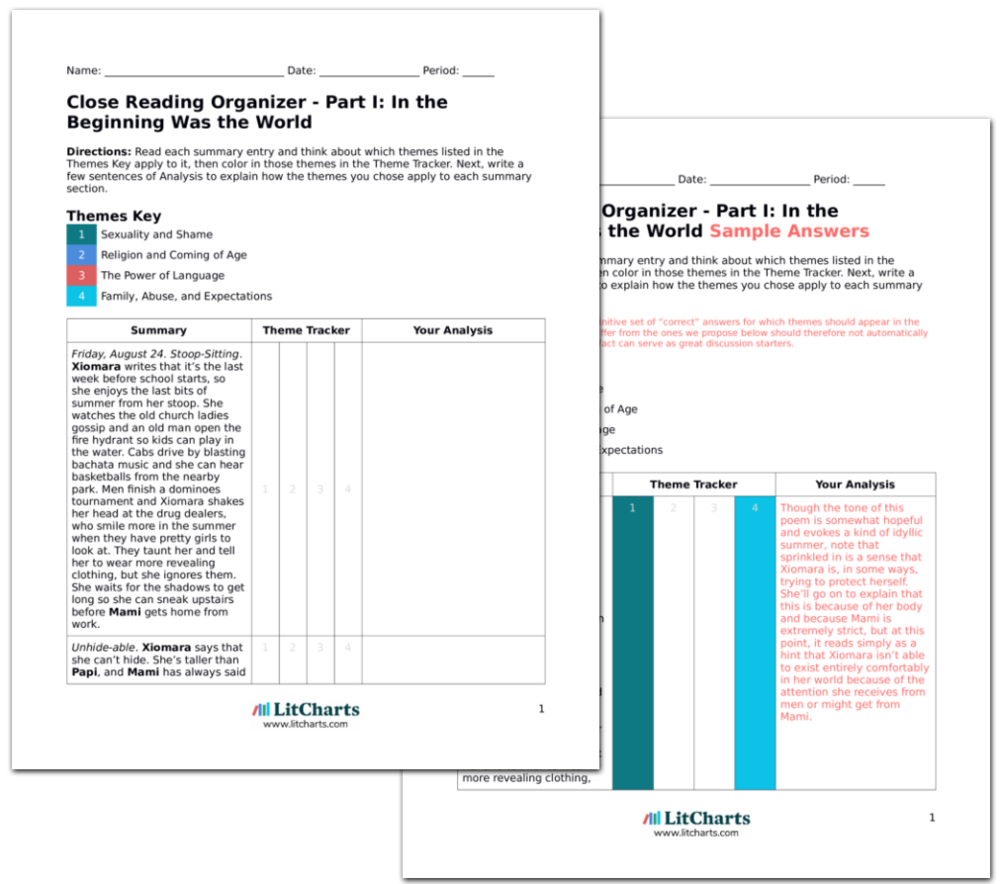