Download this LitChart! (PDF)
Teachers and parents! Struggling with distance learning? Our Teacher Edition on Norwegian Wood can help.

Welcome to the LitCharts study guide on Haruki Murakami's Norwegian Wood. Created by the original team behind SparkNotes, LitCharts are the world's best literature guides.

A concise biography of Haruki Murakami plus historical and literary context for Norwegian Wood.

A quick-reference summary: Norwegian Wood on a single page.

In-depth summary and analysis of every chapter of Norwegian Wood. Visual theme-tracking, too.

Explanations of Norwegian Wood's symbols, and tracking of where they appear.

An interactive data visualization of Norwegian Wood's plot and themes.

Born in Kyoto Prefecture to parents who both taught Japanese literature, Haruki Murakami grew up in several cities on Japanese main island of Honshū. After studying drama at Waseda University in Tokyo, Murakami and his wife, Yoko, opened a coffee-and-jazz bar which they operated together for nearly a decade. In his late twenties, Murakami—inspired by the work of Raymond Chandler, Kurt Vonnegut, and Richard Brautigan, among others—began writing fiction. He completed his first novel, Hear the Wind Sing, in just 10 months, and published it to great acclaim in 1979. As Murakami continued writing and publishing fiction, his novels began to transform from autobiographical coming-of-age tales into more surrealist, speculative, operatic works. After publishing the sci-fi novel Hard-Boiled Wonderland and the End of the World in 1985, Murakami returned to realism with 1987’s Norwegian Wood. The novel struck a chord with Japanese culture and sold millions of copies, catapulting Murakami to international fame. Murakami’s best-known works include The Wind-Up Bird Chronicle, Kafka on the Shore, 1Q84, and the memoir What I Talk About When I Talk About Running, a chronicle of his experiences as a marathon runner whose title is an homage to one of Murakami’s major literary influences, Raymond Carver. The recipient of prizes and awards such as the Gunzo Award, the Word Fantasy Award, the Franz Kafka Prize, and the Jerusalem Prize, Murakami’s work has been translated into over fifty languages and adapted widely for stage and screen.
Get the entire Norwegian Wood LitChart as a printable PDF.
"My students can't get enough of your charts and their results have gone through the roof." -Graham S.
Download 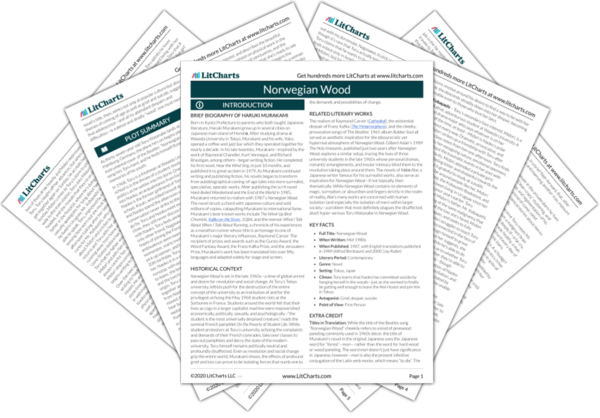 Norwegian Wood is set in the late 1960s—a time of global unrest and desire for revolution and social change. At Toru’s Tokyo university, leftists push for the destruction of the entire concept of the university as an institution of and for the privileged, echoing the May 1968 student riots at the Sorbonne in France. Students around the world felt that their lives as cogs in a larger capitalist machine were impoverished economically, politically, sexually, and psychologically—“the student is the most universally despised creature,” reads the seminal French pamphlet On the Poverty of Student Life. While student protestors at Toru’s university, echoing the complaints and demands of their French comrades, take over classes to pass out pamphlets and decry the state of the modern university, Toru himself remains politically neutral and profoundly disaffected. Even as revolution and social change grip the entire world, Murakami shows, the effects of profound grief and loss can prove to be isolating forces that numb one to the demands and possibilities of change.

Other Books Related to Norwegian Wood

The realism of Raymond Carver (Cathedral), the existential despair of Franz Kafka (The Metamorphosis), and the cheeky, provocative songs of The Beatles’ 1965 album Rubber Soul all served as aesthetic inspiration for the idiosyncratic yet hyperreal atmosphere of Norwegian Wood. Gilbert Adair’s 1989 The Holy Innocents, published just two years after Norwegian Wood, explores a similar setup, tracing the lives of three university students in the late 1960s whose personal dramas, romantic entanglements, and insular intimacy blind them to the revolution taking place around them. The novels of Kōbō Abe, a Japanese writer famous for his surrealist works, also serve as inspiration for Norwegian Wood—if not topically, then thematically. While Norwegian Wood contains no elements of magic, surrealism, or absurdism and lingers strictly in the realm of reality, Abe’s many works are concerned with human isolation (and especially the isolation of men) within larger society—a problem that most definitely plagues the disaffected, aloof, hyper-serious Toru Watanabe in Norwegian Wood.
Key Facts about Norwegian Wood

Titles in Translation. While the title of the Beatles song “Norwegian Wood” cheekily refers to a kind of pinewood paneling commonly used in 1960s décor, the title of Murakami’s novel in the original Japanese uses the Japanese word for “forest”—mori— rather than the word for hard wood or wood paneling. The word mori doesn’t just have significance in Japanese, however—mori is also the present infinitive conjugation of the Latin verb morior, which means “to die.” The novel’s title, then, winks not only at popular culture but also at themes of coming of age as well as grief and suicide, suggesting that adolescence—and all its attendant despairs and difficulties—is a dense and deadly “wood” one must navigate. 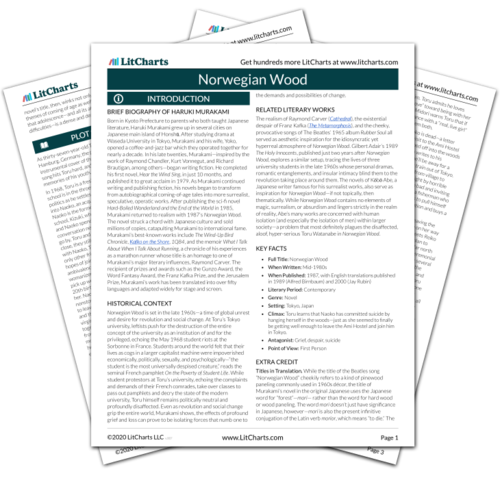 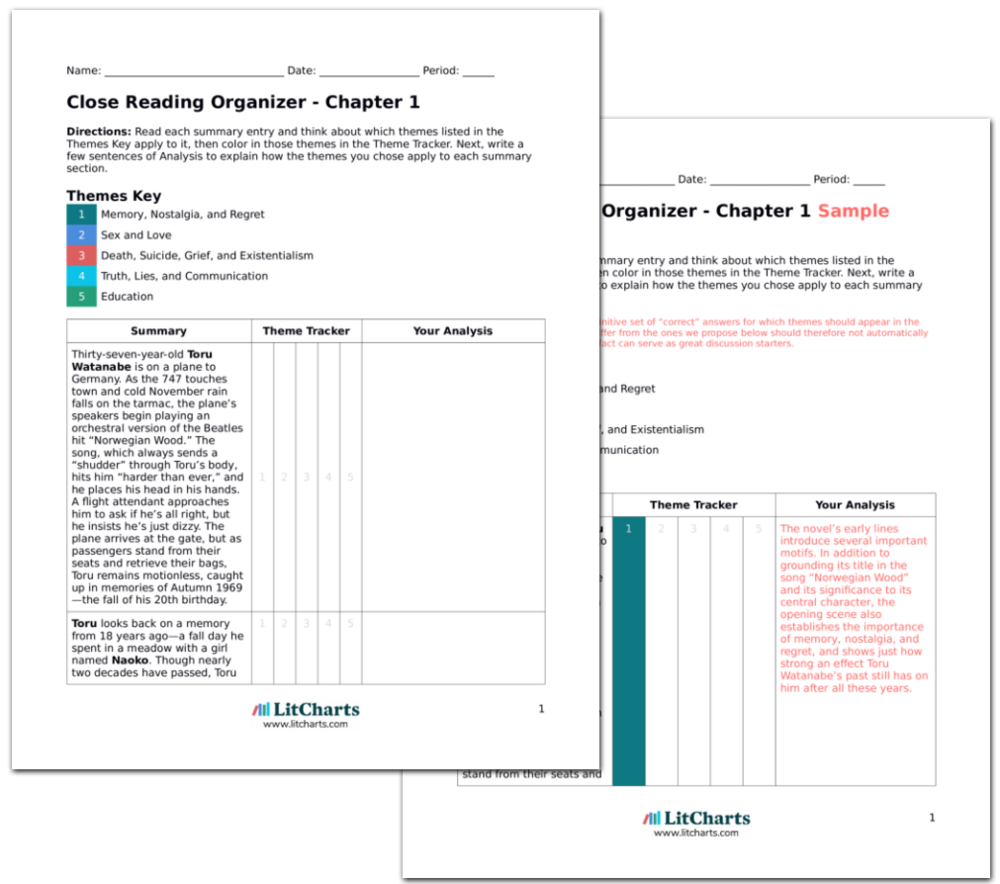