Download this LitChart! (PDF)
Teachers and parents! Struggling with distance learning? Our Teacher Edition on Phaedrus can help.

Welcome to the LitCharts study guide on Plato's Phaedrus. Created by the original team behind SparkNotes, LitCharts are the world's best literature guides.

A concise biography of Plato plus historical and literary context for Phaedrus.

A quick-reference summary: Phaedrus on a single page.

In-depth summary and analysis of every lines of Phaedrus. Visual theme-tracking, too.

Explanations of Phaedrus's symbols, and tracking of where they appear.

An interactive data visualization of Phaedrus's plot and themes.

Plato is one of the most important philosophers who ever lived, and his thought has influenced the entire subsequent Western philosophical tradition. He was born into an aristocratic Greek family, along with two brothers and a sister. The young Aristocles was said to have been given his nickname, Plato, by his wrestling coach (platon means “broad” in Greek). According to tradition, in his youth Plato wanted to become a playwright, but in his late teens or early 20s heard Socrates teaching in the marketplace and decided to devote his life to philosophy. Plato continued to study under Socrates until the age of 28, in 399 B.C., when the older philosopher was tried and executed for impiety. After this, Plato spent time traveling around the Mediterranean before settling down in Athens to write and establish his Academy, the predecessor of the modern university; Aristotle became his most famous student. The Academy persisted until 86 B.C. Plato also invented the dialogue, a literary form which depicts a conversation between one or more characters. Some of his most famous dialogues (he wrote more than 20) include Euthyphro, Apology, Crito, Meno, Phaedo, The Symposium, and The Republic. Plato died at the age of 81.
Get the entire Phaedrus LitChart as a printable PDF.
"My students can't get enough of your charts and their results have gone through the roof." -Graham S.
Download 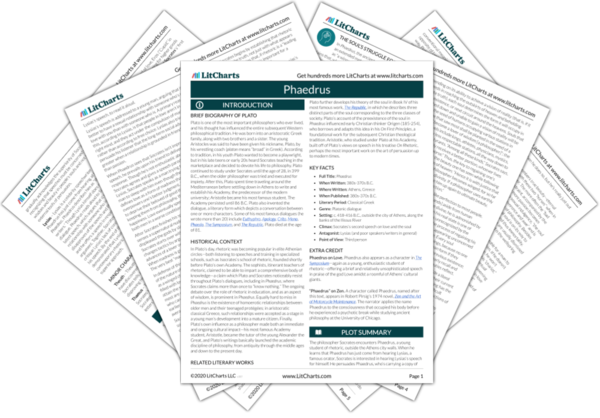 In Plato’s day, rhetoric was becoming popular in elite Athenian circles—both listening to speeches and training in specialized schools, such as Isocrates’s school of rhetoric, founded shortly before Plato’s own Academy. The sophists, itinerant teachers of rhetoric, claimed to be able to impart a comprehensive body of knowledge—a claim which Plato and Socrates noticeably resist throughout Plato’s dialogues, including in Phaedrus, where Socrates claims more than once to “know nothing.” The ongoing debate over the role of rhetoric in education, and as an aspect of wisdom, is prominent in Phaedrus. Equally hard to miss in Phaedrus is the existence of homoerotic relationships between older men and their teenaged protégées; in aristocratic classical Greece, such relationships were accepted as a stage in a young man’s development into a mature citizen. Finally, Plato’s own influence as a philosopher made both an immediate and ongoing cultural impact—his most famous Academy student, Aristotle, became the tutor of the young Alexander the Great, and Plato’s writings basically launched the academic discipline of philosophy, from antiquity through the middle ages and down to the present day.

Other Books Related to Phaedrus

Plato further develops his theory of the soul in Book IV of his most famous work, The Republic, in which he describes three distinct parts of the soul corresponding to the three classes of society. Plato’s account of the preexistence of the soul in Phaedrus influenced early Christian thinker Origen (185-254), who borrows and adapts this idea in his On First Principles, a foundational work for the subsequent Christian theological tradition. Aristotle, who studied under Plato at his Academy, built off of Plato’s views on speech in his treatise On Rhetoric, perhaps the most important work on the art of persuasion up to modern times.
Key Facts about Phaedrus

Phaedrus on Love. Phaedrus also appears as a character in The Symposium—again as a young, enthusiastic student of rhetoric—offering a brief and relatively unsophisticated speech in praise of the god Love amidst a roomful of Athens’ cultural giants.

“Phaedrus” on Zen. A character called Phaedrus, named after this text, appears in Robert Pirsig’s 1974 novel, Zen and the Art of Motorcycle Maintenance. The narrator applies the name Phaedrus to the consciousness that occupied his body before he experienced a psychotic break while studying ancient philosophy at the University of Chicago. 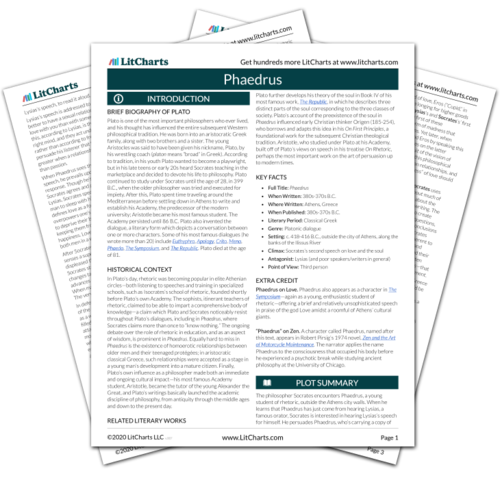 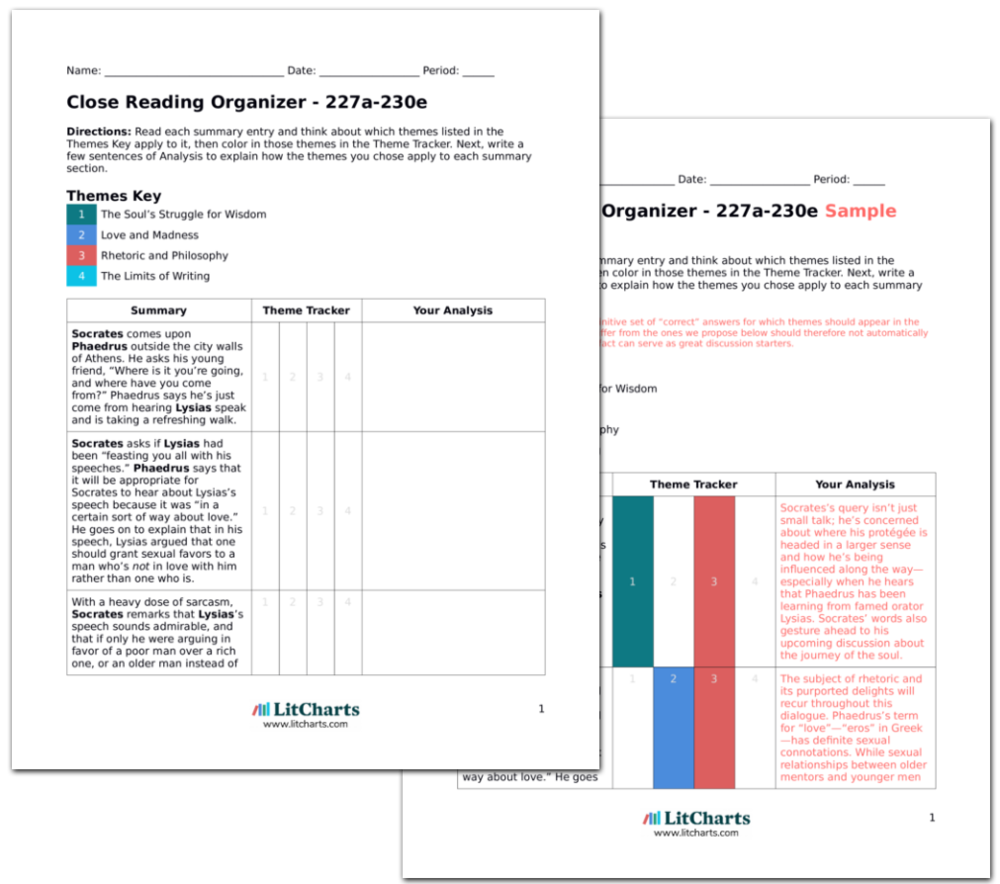