Get LitCharts A+
LitCharts assigns a color and icon to each theme in Tartuffe, which you can use to track the themes throughout the work.

In Tartuffe, Moliere demonstrates both how important family and fatherhood are, and how devastating it is when these structures are corrupted. As Orgon, the patriarch, falls further and further into Tartuffe’s trap, all those in his household begin to suffer the consequences, making clear his central role within his family. This truth contradicts Orgon’s own fear that his relatives consider him laughable and irrelevant. Although he makes a series of misguided choices—the first and gravest of which is trusting Tartuffe—Orgon’s importance to his family is indisputable. He can force his daughter Mariane to marry someone she does not love, disown his son Damis, abuse his servant Dorine, and force his wife Elmire to spend time with a man who seeks to molest her. Each of these characters seeks to talk Orgon out of these terrible decisions, yet in the end they must bow to his wishes. Only when he turns against Tartuffe at last can the family hope to find salvation.

The secondary characters Madame Pernelle and Cléante also demonstrate the importance of family within this society. Madame Pernelle represents family gone wrong; she is a shrill and bitter woman who seeks only to pester and criticize her relatives. Cléante, on the other hand, represents family at its best. He loves his family, and tries only to help them and steer them on the right path. It is also important to note that during this time period, the King was considered the father of his entire country. And, at the end of the play, the King acts as a kind of father in restoring order to Orgon’s family, righting the structure of the family unit and allowing Orgon to resume his role as the powerful and central patriarch. 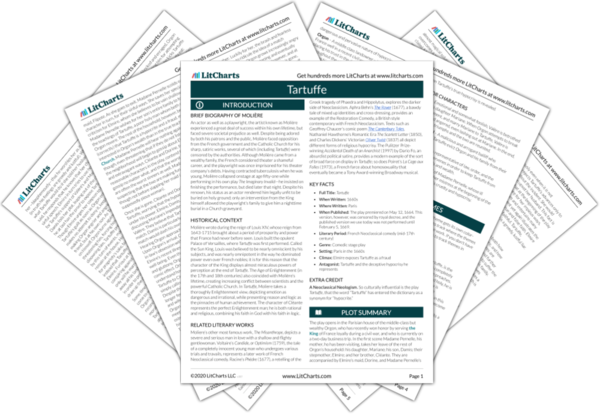 Family and Fathers Quotes in Tartuffe

Below you will find the important quotes in Tartuffe related to the theme of Family and Fathers.
Act 1, Scene 1 Quotes

But he’s quite lost his senses since he fell
Beneath Tartuffe’s infatuating spell
He calls him brother, and loves him as his life
Preferring him to mother, child, or wife.

Orgon: Has all been well, these two days I’ve been gone?
How are the family? What’s been going on?

Dorine: Your wife, two days ago, had a bad fever
And a fierce headache which refused to leave her

Dorine: Tartuffe: Why, he’s round and red,
Bursting with health, and excellently fed.

He guides our lives, and to protect my honor
Stays by my wife, and keeps an eye upon her;
He tells me whom he sees, and all she does,
And seems more jealous than I ever was!

Dorine: Faced with a fate so hideous and absurd,
Can you not utter one dissenting word?

Mariane: What good would it do? A father’s power is great.

To make a scandal would be too absurd.
Good wives laugh off such trifles, and forget them;
Why should they tell their husbands, and upset them?

Orgon: Can it be true, this dreadful thing I hear?

Tartuffe: Yes, Brother, I’m a wicked man, I fear;
A wretched sinner, all depraved and twisted,
The greatest villain that has ever existed.
My life’s one heap of crimes, which grows each minute;
There’s naught but foulness and corruption in it;
And I perceive that Heaven, outraged by me,
Has chosen this occasion to mortify me
Charge me with any deed you wish to name;
I’l not defend myself, but take the blame.
Believe what you are told, and drive Tartuffe
Like some base criminal from beneath your roof;
Yes, drive me hence, and with a parting curse:
I shan’t protest, for I deserve far worse.

Orgon (to Damis): Ah, you deceitful boy, how dare you try
To stain his purity with so foul a lie?

Villain, be still!
I know your motives; I know you wish him ill:
Yes, all of you—wife, children, servants, all—
Conspire against him and desire his fall
Employing every shameful trick you can
To alienate me from this saintly man
Ah, but the more you seek to drive him away
The more I’ll do to keep him. Without delay,
I’ll spite this household and confound its pride
By giving him my daughter as his bride.

Sir, by that Heaven which sees me here distressed,
And by whatever else can move your breast,
Do not employ a father’s power, I pray you,
To crush my heart and force it to obey you,
Nor by your harsh commands oppress me so
That I’ll begrudge the duty which I owe—
And do not so embitter and enslave me
That I shall hate the very life you gave me.

Why worry about the man? Each day he grows
More gullible; one can lead him by the nose.
To find us here would fill him with delight,
And if he saw the worst, he’d doubt his sight.

Well, so you thought you’d fool me, my dear saint!
How soon you wearied of the saintly life—
Wedding my daughter, and coveting my wife!
I’ve long suspected you, and had a feeling
That soon I’d catch you at your double-dealing.
Hust now, you’ve given me evidence galore;
It’s quite enough; I have no wish for more. 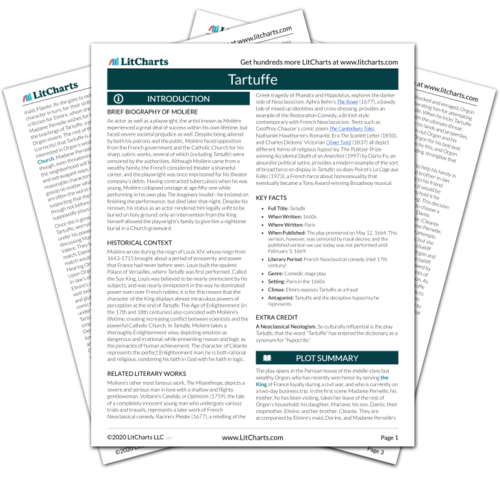 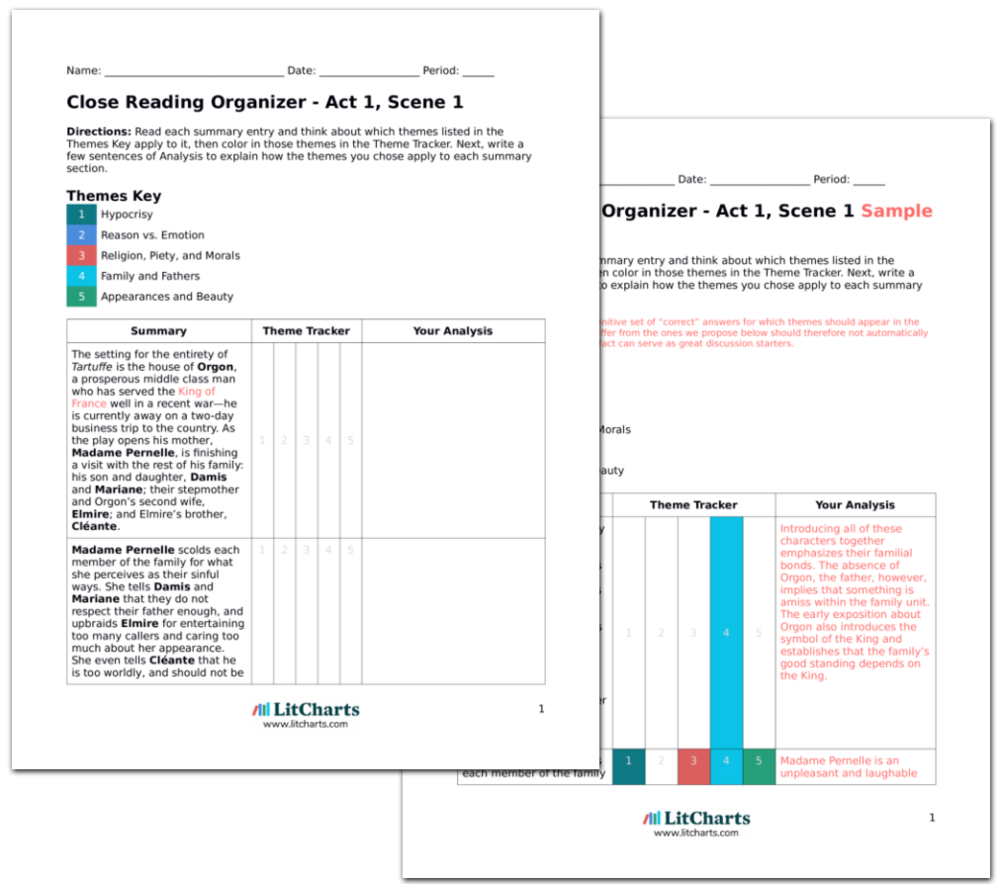