Download this LitChart! (PDF)
Teachers and parents! Struggling with distance learning? Our Teacher Edition on The Browning Version can help.

The Browning Version begins in the sitting-room of a flat that is spacious and cheerfully decorated, if a little dark and gloomy. It is the on-site home of Andrew Crocker-Harris and his resentful wife, Millie, provided to them as part of Andrew’s employment at a public school for boys in the south of England. It’s between six and seven p.m. in July, and today is the final day of the school year. Due to his poor health, today also represents Andrew’s final day of employment as a teacher of Classics at the school before he moves—on doctor’s orders—to a less strenuous job elsewhere.

John Taplow, a schoolboy aged sixteen, enters the room and calls out for “Sir!”—meaning his teacher, Andrew. He lets himself in hesitantly and pinches a chocolate from a box he notices on the table. Taplow picks up a walking stick and begins practicing his golf swing. Just at this moment, Frank Turner, one of the younger and more popular teachers at the school, comes in. He offers Taplow advice on his swing and the two of them get into a conversation. Taplow tells Frank that he has been summoned by Andrew for extra work because of missing a day in the previous week with flu. He also informs Frank that he is hoping to switch to Frank’s science class in the new academic year but is waiting on Mr. Crocker-Harris’s approval for “remove”—which, if it was any other teacher than “the Crock,” would already have been granted. Encouraged by Frank’s laidback air, Taplow performs a mocking impression of Andrew, reciting the exact words his teacher has to say on the “remove”: “My dear Taplow, I have given you exactly what you deserve. No less; and certainly no more.” On Frank’s invitation, Taplow repeats his impression, with neither of them aware that Millie has just entered the flat.

After greeting Frank, Millie sends Taplow to the pharmacist to get Andrew’s heart medicine made up. Exiting the room, Taplow begs Frank to ensure that Millie doesn’t tell Andrew about his impersonation. With Taplow gone, it becomes clear that Frank and Millie are having an affair, though Millie appears the more committed of the two. They make plans to see each other in September in Bradford, though Frank seems reticent. Millie kisses Frank, telling her she loves him—but he is nervous about Andrew returning. Millie tells Frank she heard Taplow’s imitation of Andrew and says flirtatiously that Frank was “very naughty” to encourage him. Acknowledging his overly jovial relationship with the boys at the school, Frank says it was a choice between that or the “petty, soulless tyranny” that Andrew uses to maintain discipline, and adds that he doesn’t think Andrew should ever have become a teacher. Millie relates that Andrew had once been inspired by his “vocation,” even aiming to become headmaster one day, but lost his passion along the way.

Changing the subject, Millie asks why Frank did not sit with her and Andrew at the school’s recent cricket match, instead choosing to sit with one of the other schoolmasters’ wives. He protests his innocence, saying he’d “clean forgot.” She says that, though she knows he doesn’t love her, he ought to behave in a way sympathetic to the fact that she loves him. Half-joking, she adds that if Frank doesn’t come to Bradford in September, she’ll kill herself.

Andrew comes in through the door. After a brief conversation expressing his slight annoyance that Millie has sent Taplow away—rather than having the prescription delivered—he greets Frank. He shows Frank the new timetable he has made for the following term, a task that he has done each year during his long employment at the school.

Taplow comes back, prompting Frank to leave so that Andrew’s lesson can commence. Millie also exits to the kitchen to prepare dinner. Andrew and Taplow sit down at the table. Taplow’s task is to arduously translate out loud lines from Aeschylus’s Greek tragedy, The Agamemnon. As he does so, Andrew makes frequent interjections to correct Taplow. In a sudden flash of inspiration, Taplow embellishes one of the lines, making it more dramatic and gruesome; the line in question concerns the moment just after Clytemnestra has murdered her husband, Agamemnon. Andrew chastises his pupil for adding words that weren’t in the original line, but suddenly seems contemplative and emotional. He tells Taplow that in his youth he had put great effort into his own translation of The Agamemnon, producing a text that was perhaps even more beautiful than the original—though it was never published.

The entrance of Dr. Frobisher, the school headmaster, interrupts the lesson and Taplow is dismissed. Though outwardly charming and warm, Dr. Frobisher has two items of bad news for Andrew. Firstly, Andrew has been refused his pension by the school governors because he is not quite of retirement age—and despite an exception having been made for a similar case recently. Secondly, Dr. Frobisher wants to switch the order of speakers in the end-of-term ceremony: whereas a teacher of Andrew’s seniority would normally take the final “headline” slot, Dr. Frobisher wants to swap the running order so that a younger and more popular teacher ends the assembly on a “climax.” Andrew meekly accepts both decisions. The headmaster leaves, complimenting Millie’s beauty on his way out.

Now alone with Andrew, Millie asks him about the pension decision. She is furious with him for not putting up a fight, betting that he just “sat there and made a joke in Latin.” Continuing her tirade, she accuses him of wanting to live off her money (which comes from her father’s business) and of neglecting the husband’s responsibility to support his wife. She’s less bothered about the change in speaking order at the assembly; Dr. Frobisher had in fact asked for her opinion a week before.

This heated discussion is interrupted by the arrival of Mr. Peter Gilbert and Mrs. Gilbert. They are fresh-faced newly-weds and have come to see the flat they will live in next term when Peter takes over Andrew’s teaching position. Millie shows Mrs. Gilbert around. Meanwhile, Andrew and Peter have a conversation in which Peter admits he is worried about being able to maintain discipline with his pupils. He clumsily lets slip that Dr. Frobisher calls Andrew the “Himmler of the fifth”—after one of the top Nazi commanders—for his strict authoritarian manner. Andrew is evidently upset at the nickname and opens up to Peter about his teaching career. He says he knew from the beginning that he didn’t have the “knack” for making himself liked, but he at least tried to communicate to his pupils some of his “joy in the great literature of the past.” He judges that he failed, most of the time. Though he knows he isn’t liked, he is still surprised to learn that he is feared, and blames his failure on “a sickness of the soul.” Suddenly embarrassed, he tries to restore decorum with Peter. Millie and Mrs. Gilbert come back in and, after some awkward goodbyes, the young couple leave.

Millie leaves the room. Andrew, now alone, seems to be making a concerted effort to hold in his emotions. To Andrew’s surprise, Taplow returns, saying he wishes to bid his teacher goodbye and good luck. He offers him a gift: the Robert Browning translation of The Agamemnon. Andrew doesn’t realize the book is for him. Andrew hands it back to Taplow, telling him that over time he might get to like Browning’s version. Taplow explains that the book is a gift, and that he has written an inscription in the fly-leaf. Andrew reads the inscription and is deeply moved. He asks Taplow to fetch his medicine and spasms with emotion, which he is unable to hide on Taplow’s return. Frank enters and Andrew, with evident pride, shows him what Taplow has written, translating it to: “God from afar looks graciously upon a gentle master” (a quote from The Agamemnon). Andrew is once again overcome by his emotion. On Frank’s signal, Taplow says goodbye and leaves. Andrew apologizes to Frank for making a fool of himself in front of him and Taplow, but Frank is sympathetic.

Millie comes back in. Learning of Taplow’s gift, she dismisses it as an “artful” attempt to get Andrew to grant Taplow’s “remove.” With scarcely-hidden glee she also informs Andrew of Taplow’s earlier impersonation of him. Andrew puts down the book and goes to his room. Frank expresses his disgust at Millie for her treatment of Andrew and tells her that their affair is finished. She slaps him, but insists that everything will be all right when he comes to Bradford.

As Andrew comes back, Millie leaves the room. Andrew and Frank have a glass of sherry and Frank says that, while Taplow had indeed impersonated Andrew, he had also expressed his respect and admiration. Andrew dismisses this information, claiming that he doesn’t care what Frank or Taplow think of him. Frank offers Andrew some last words of advice: that he should leave Millie. Andrew asks if that is so that Frank can more easily continue his affair with her. Frank is deeply shocked to learn of Andrew’s knowledge of the illicit relationship, but Andrew explains that Frank is by no means the first lover that Millie has had behind his back. In fact, she tells him everything. Andrew laments that he and Millie were doomed to hate each other because their “two kinds of love” were incompatible from the very beginning.

Andrew dismisses his earlier displays of emotion as “the muscular twitchings of a corpse.” Frank insists that a corpse can be revived, and expresses a wish to visit Andrew in September at his new school in Dorset. Despite Andrew’s protestations, Frank puts a date in the calendar and, as Millie returns into the room, makes Andrew give him the new school’s address. Frank then shakes Andrew’s hand and departs.

Millie laughs at Andrew for inviting Frank to stay with him, but Andrew explains that it was Frank’s own idea. Millie insists that, instead of visiting Andrew in Dorset, Frank will join her in Bradford. Andrew replies that the likeliest scenario is that Frank will go to neither of them. As they sit down for dinner, Andrew tells Millie that, instead of himself going to Bradford in the months prior to his new job, he will stay at the current school. She tells him not to expect her to come to Dorset; he replies that neither of them has the right to expect anything from the other. Just at the moment the phone rings. It’s Dr. Frobisher with some questions about the school timetable drawn up by Andrew. Andrew takes the opportunity to tell Dr. Frobisher that he has changed his mind about the order of speakers in the assembly and insists on taking his rightful slot at the end. He ends the conversation saying that he is “of the opinion that occasionally an anti-climax can be surprisingly effective.” Hanging up the phone, he and Millie sit down to dinner. 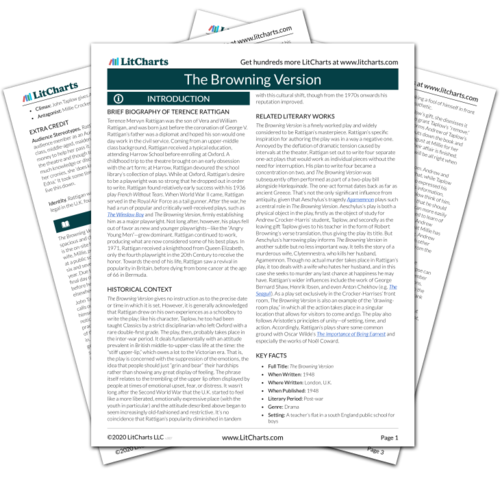 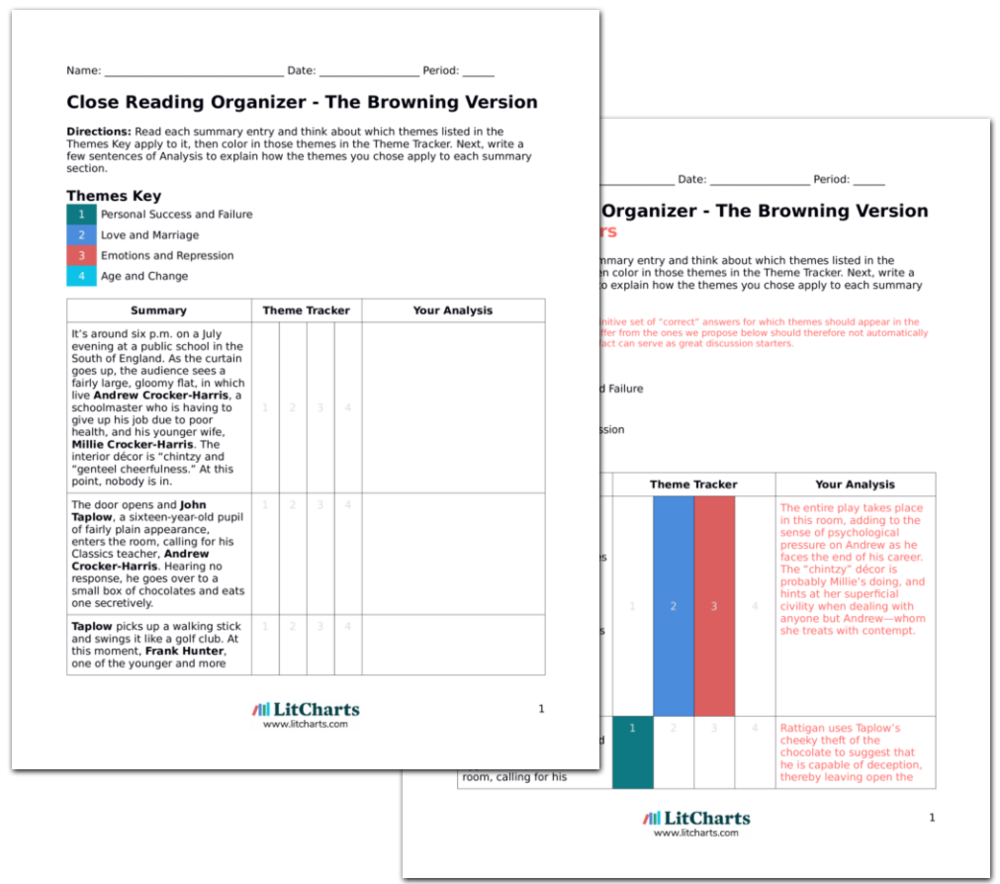