Download this LitChart! (PDF)
Teachers and parents! Struggling with distance learning? Our Teacher Edition on The Farming of Bones can help.

Welcome to the LitCharts study guide on Edwidge Danticat's The Farming of Bones. Created by the original team behind SparkNotes, LitCharts are the world's best literature guides.

The Farming of Bones: Introduction

A concise biography of Edwidge Danticat plus historical and literary context for The Farming of Bones.

The Farming of Bones: Plot Summary

A quick-reference summary: The Farming of Bones on a single page.

In-depth summary and analysis of every chapter of The Farming of Bones. Visual theme-tracking, too.

The Farming of Bones: Themes

Explanations, analysis, and visualizations of The Farming of Bones's themes.

The Farming of Bones: Quotes

The Farming of Bones's important quotes, sortable by theme, character, or chapter.

The Farming of Bones: Characters

Description, analysis, and timelines for The Farming of Bones's characters.

The Farming of Bones: Symbols

Explanations of The Farming of Bones's symbols, and tracking of where they appear.

The Farming of Bones: Theme Wheel

An interactive data visualization of The Farming of Bones's plot and themes.

Edwidge Danticat was born in Haiti in 1969, and her father, André, emigrated to the United States two years after her birth. Two years later, Danticat’s mother, Rose, joined André in the U.S., leaving Danticat and her brother to be raised by an aunt and uncle. In 1981, Danticat reunited with her family in Brooklyn, New York and settled into a predominantly Haitian American neighborhood. Danticat had difficulty adjusting to a new country, and used writing to express her disorientation, unhappiness, and sense of alienationher teenage stories were published in New Youth Connections, a New York-based magazine. Although she had plans to become a nurse, Danticat enrolled at Barnard College and eventually earned a bachelor’s degree in French literature. She then earned a Master of Fine Arts from Brown University; her master’s thesis became the foundation for her novel Breath, Eyes, Memory (1994), which was nationally recognized after television host Oprah selected it for her Book Club. A year later, Danticat published Krik? Krak!, a collection of short stories. The collection was a finalist for the National Book Award. She wrote her second novel, The Farming of Bones, in 1998, followed by The Dew Breaker in 2004. In 2007, she released her memoir, Brother, I’m Dying, which was nominated for the National Book Award and won the National Book Critics Circle Award.
Get the entire The Farming of Bones LitChart as a printable PDF.
"My students can't get enough of your charts and their results have gone through the roof." -Graham S.
Download 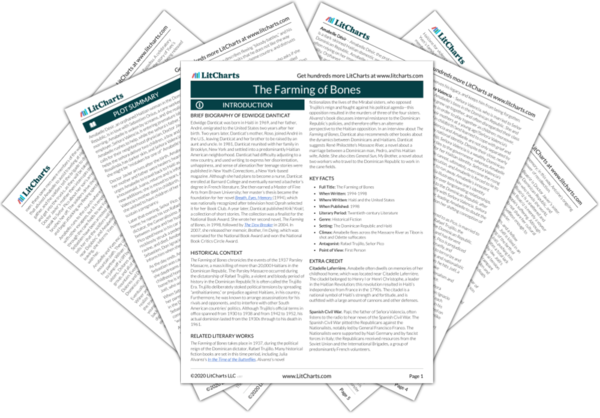 Historical Context of The Farming of Bones

The Farming of Bones chronicles the events of the 1937 Parsley Massacre, a mass killing of more than 20,000 Haitians in the Dominican Republic. The Parsley Massacre occurred during the dictatorship of Rafael Trujillo, a violent and bloody period of history in the Dominican Republicit is often called the Trujillo Era. Trujillo deliberately stoked political tensions by spreading “antihaitianismo,” or prejudice against Haitians, in his country. Furthermore, he was known to arrange assassinations for his rivals and opponents, and to interfere with other South American countries’ politics. Although Trujillo’s official terms in office spanned from 1930 to 1938 and from 1942 to 1952, his actual dominion lasted from the 1930s through to his death in 1961.

Other Books Related to The Farming of Bones

The Farming of Bones takes place in 1937, during the political reign of the Dominican dictator, Rafael Trujillo. Many historical fiction books are set in this time period, including Julia Alvarez’s In the Time of the Butterflies. Alvarez’s novel fictionalizes the lives of the Mirabal sisters, who opposed Trujillo’s reign and fought against his political agenda—this opposition resulted in the murders of three of the four sisters. Alvarez’s book discusses internal resistance to the Dominican Republic’s policies, and therefore offers an alternate perspective to the Haitian opposition. In an interview about The Farming of Bones, Danticat also recommends other books about the dynamics between Dominicans and Haitians. Danticat suggests René Philoctète’s Massacre River, a novel about a marriage between a Dominican man, Pedro, and his Haitian wife, Adele. She also cites General Sun, My Brother, a novel about two workers who travel to the Dominican Republic to work in the cane fields.
Key Facts about The Farming of Bones

Extra Credit for The Farming of Bones

Citadelle Laferrière. Amabelle often dwells on memories of her childhood home, which was located near Citadelle Laferrière. The citadel belonged to Henry I or Henri Christophe, a leader in the Haitian Revolution; this revolution resulted in Haiti’s independence from France in the 1790s. The citadel is a national symbol of Haiti’s strength and fortitude, and is outfitted with a large amount of cannons and other defenses. 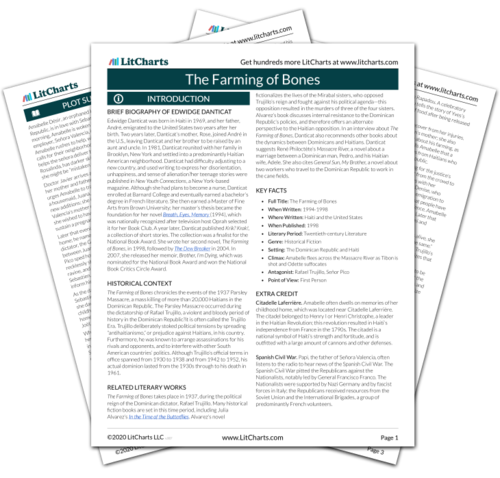 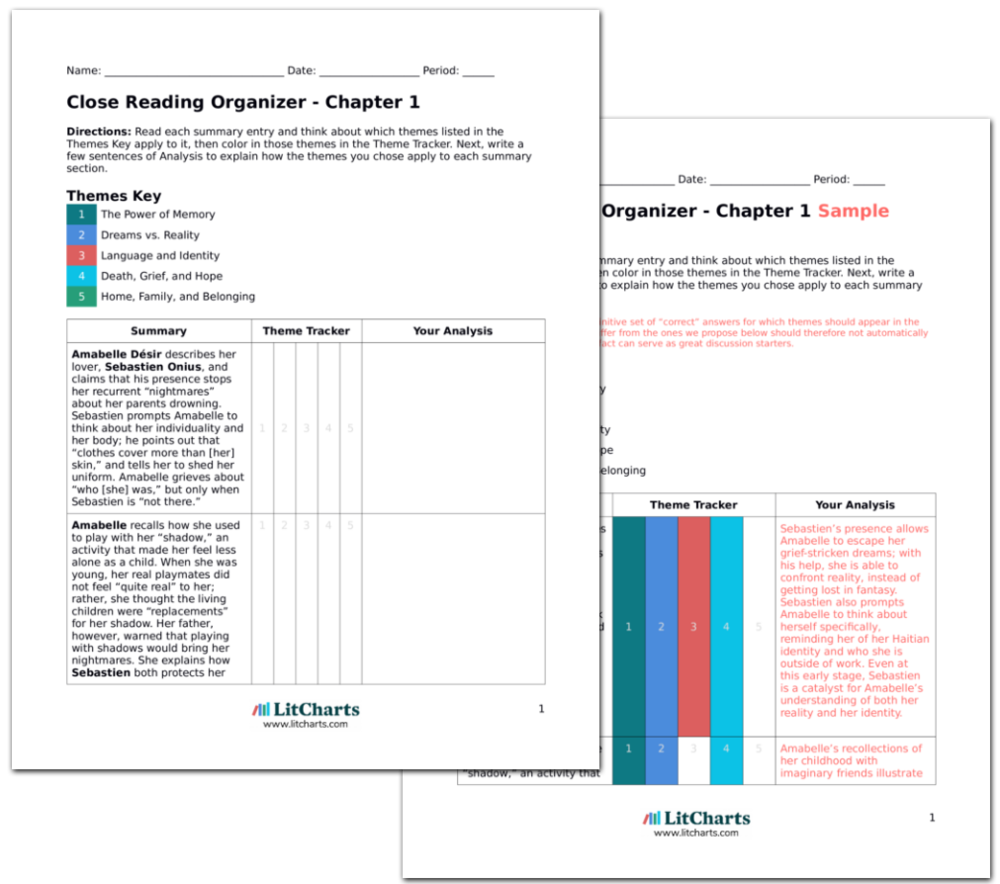