Download this LitChart! (PDF)
Teachers and parents! Struggling with distance learning? Our Teacher Edition on The Immortalists can help.

Welcome to the LitCharts study guide on Chloe Benjamin's The Immortalists. Created by the original team behind SparkNotes, LitCharts are the world's best literature guides.

A concise biography of Chloe Benjamin plus historical and literary context for The Immortalists.

A quick-reference summary: The Immortalists on a single page.

In-depth summary and analysis of every chapter of The Immortalists. Visual theme-tracking, too.

Explanations, analysis, and visualizations of The Immortalists's themes.

The Immortalists's important quotes, sortable by theme, character, or chapter.

Description, analysis, and timelines for The Immortalists's characters.

Explanations of The Immortalists's symbols, and tracking of where they appear.

An interactive data visualization of The Immortalists's plot and themes.

Chloe Benjamin was born and raised in San Francisco, California. She graduated from Vassar College in New York in 2010 and pursued and received an MFA. in fiction at the University of Wisconsin. Benjamin’s first novel, The Anatomy of Dreams, was published in 2014. It received the Edna Ferber Fiction Book Award and was long listed for the 2014 Center for Fiction First Novel Prize. Her second novel, The Immortalists, was published in 2018 and became a New York Times Best Seller. She currently lives in Madison, Wisconsin, with her husband.
Get the entire The Immortalists LitChart as a printable PDF.
"My students can't get enough of your charts and their results have gone through the roof." -Graham S.
Download 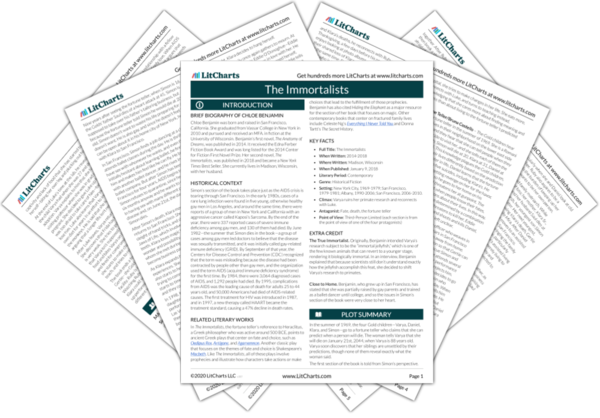 Historical Context of The Immortalists

Simon’s section of the book takes place just as the AIDS crisis is tearing through San Francisco. In the early 1980s, cases of a rare lung infection were found in five young, otherwise healthy gay men in Los Angeles, and around the same time, there were reports of a group of men in New York and California with an aggressive cancer called Kaposi’s Sarcoma. By the end of the year, there were 337 reported cases of severe immune deficiency among gay men, and 130 of them had died. By June 1982—the summer that Simon dies in the book—a group of cases among gay men led doctors to believe that the disease was sexually transmitted, and it was initially called gay-related immune deficiency (GRID). By September of that year, the Centers for Disease Control and Prevention (CDC) recognized that the term was misleading because the disease had been contracted by people other than gay men, and the organization used the term AIDS (acquired immune deficiency syndrome) for the first time. By 1984, there were 3,064 diagnosed cases of AIDS, and 1,292 people had died. By 1995, complications from AIDS was the leading cause of death for adults 25 to 44 years old, and 50,000 Americans had died of AIDS-related causes. The first treatment for HIV was introduced in 1987, and in 1997, a new therapy called HAART became the treatment standard, causing a 47% decline in death rates.

Other Books Related to The Immortalists

In The Immortalists, the fortune teller’s reference to Heraclitus, a Greek philosopher who was active around 500 BCE, points to ancient Greek plays that center on fate and choice, such as Oedipus Rex, Antigone, and Agamemnon. Another classic play that focuses on the themes of fate and choice is Shakespeare’s Macbeth. Like The Immortalists, all of these plays involve prophecies and illustrate how characters take actions or make choices that lead to the fulfillment of those prophecies. Benjamin has also cited Hiding the Elephant as a major resource for the section of her book that focuses on magic. Other contemporary books that center on fractured family lives include Celeste Ng’s Everything I Never Told You and Donna Tartt’s The Secret History.
Key Facts about The Immortalists

Extra Credit for The Immortalists

The True Immortalist. Originally, Benjamin intended Varya’s research subject to be the “immortal jellyfish,” which is one of the few known animals that can revert to a younger stage, rendering it biologically immortal. In an interview, Benjamin explained that because scientists still don’t understand exactly how the jellyfish accomplish this feat, she decided to shift Varya’s research to primates.

Close to Home. Benjamin, who grew up in San Francisco, has stated that she was partially raised by gay parents and trained as a ballet dancer until college, and so the issues in Simon’s section of the book were very close to her heart. 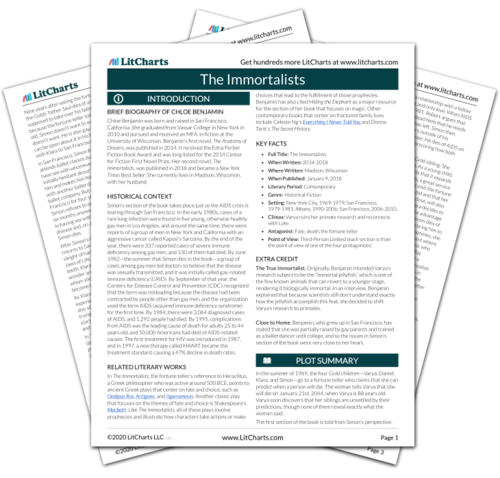 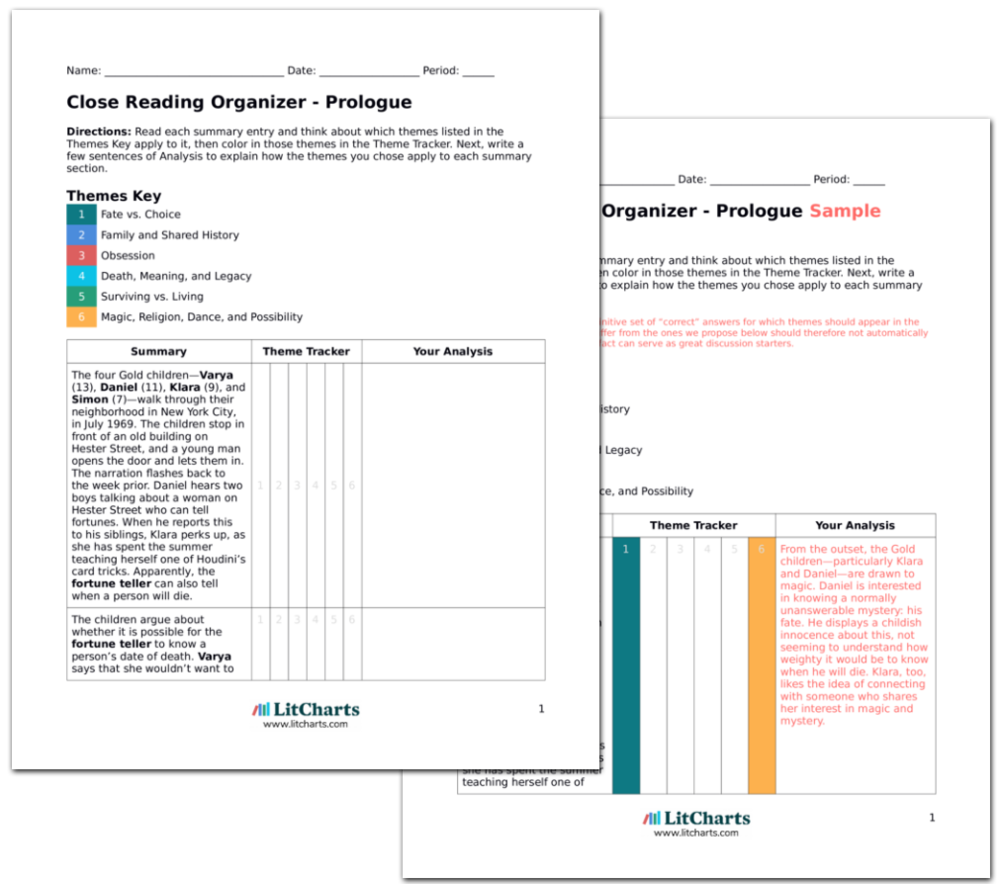