Mathilde Loisel is the pretty and charming daughter of a family of modest means. Her family is unable to afford a dowry and so she is married to M. Loisel, a clerk who works for the Ministry of Education. Because she is beautiful, Mathilde feels that she has been short-changed in life: she is dismayed by the shabbiness of her apartment and her humble maid, and she constantly dreams of luxurious apartments and lavish dinners to escape the pedestrian reality of her own daily existence.

Hoping to cheer her up, M. Loisel gets them invited to a party hosted by the Minister of Education. However, Mathilde initially refuses the invitation, complaining that she doesn’t have anything to wear. M. Loisel generously agrees to give her 400 francs to buy a new dress, the exact amount he had been setting aside to purchase a rifle in order to go hunting with his friends on the plains of Nanterre. Mathilde buys the dress, but that still isn’t enough: now she wants a jewel or a gem to wear over it. At her husband’s suggestion, Mathilde pays her wealthy friend Jeanne Forestier a visit to borrow some jewelry. Mathilde looks through every piece in her friend’s magnificent jewel box, finally settling on an expensive-looking diamond necklace. Admiring her reflection in the mirror, Mathilde is finally happy.

Mathilde is a huge success at the party, drunk with pleasure as she is admired by the other guests. However, disaster strikes when she loses the necklace during the carriage ride home. The Loisels look everywhere for the lost necklace and file a police report, but without any luck. Too ashamed to admit the loss of the necklace to Mme. Forestier, the Loisels decide to replace it with a similar one costing 40,000 francs. M. Loisel has 18,000 francs that he inherited from his father but is forced to borrow the rest, asking for loans from friends and making ruinous deals with moneylenders and loan sharks. Once the money is raised, the Loisels purchase the replacement and return the necklace to an unsuspecting Mme. Forestier.

The following years are difficult for both Mathilde and her husband as they struggle to settle their debts. After dismissing their maid and renting a garret apartment, M. Loisel takes on a night job balancing accounts and copying documents, while Mathilde learns to do the heavy housework and chores of a working woman. This period of hardship takes its toll on Mathilde, who loses her once-remarkable beauty but consoles herself with the memory of the night of party when she was still beautiful and admired. After ten long years, the terrible debt is finally repaid.

One day while taking a walk on the Champs Elysées, Mathilde sees Mme. Forestier, who is still young-looking and beautiful. Mme. Forestier barely recognizes her old friend, remarking how much she has changed. Now that the debt has been settled, Mathilde decides to tell Mme. Forestier the whole story, proud that she had been able to replace and pay for such an expensive necklace. However, Mme. Forestier is dismayed to inform her that all this suffering was for nothing—Mathilde bought a diamond necklace to replace hers, but the original was only costume jewelry worth, at most, 500 francs. 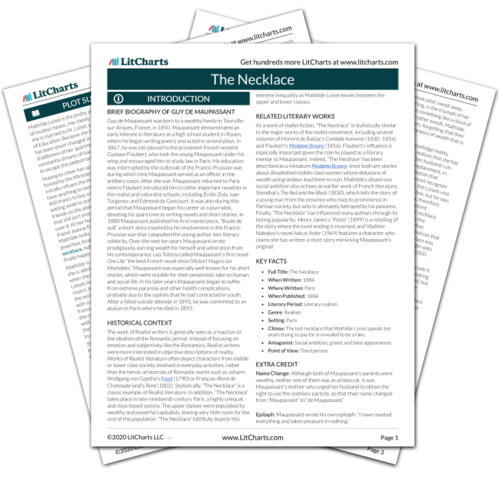 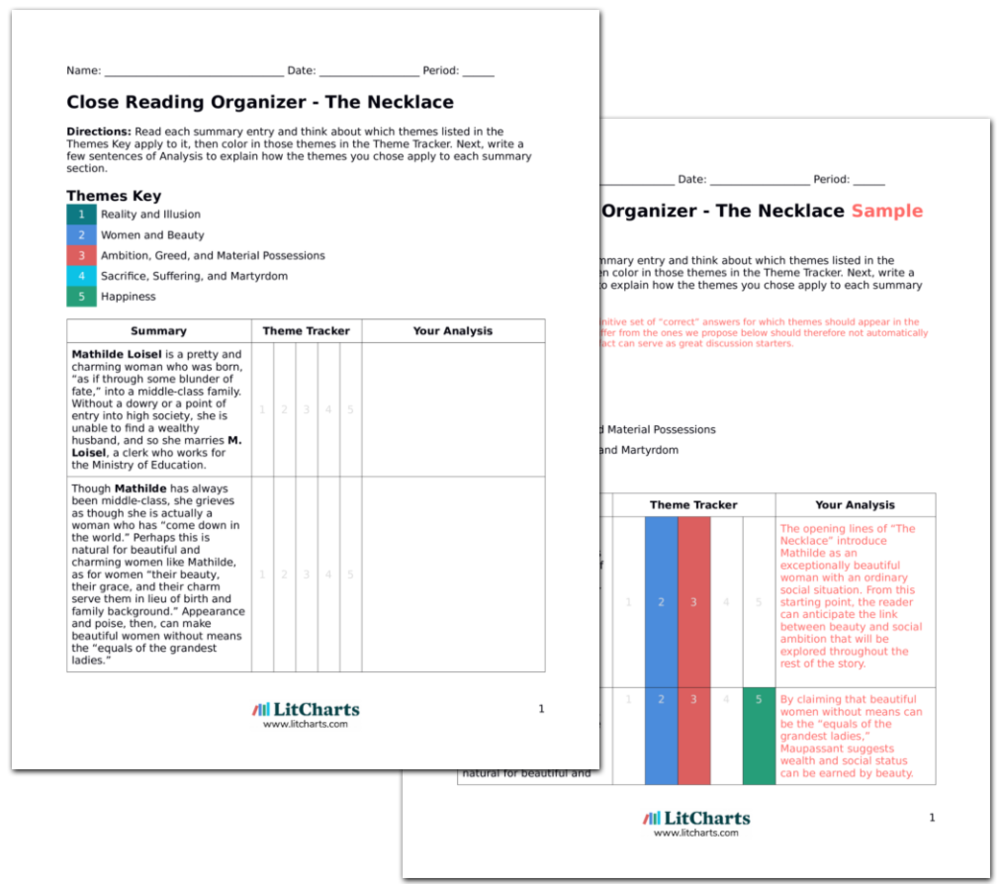