Henry is fascinated by the spectacle of death. He looks into the eyes of corpses for answers to his questions about death, but they fail to communicate anything but strangeness, emptiness, and horror. When Henry and Wilson each get a flag to carry for the regiment, a position of honor, each time they must wrestle it from the hands of a dying man. Without providing any definitive answers, Red Badge explores a host of questions regarding death in general and death in war in particular: Do our beliefs endure beyond the grave? Is fighting and dying worth it? Can death be glorious? Can we ultimately know anything about what happens after death?

The Living and the Dead ThemeTracker 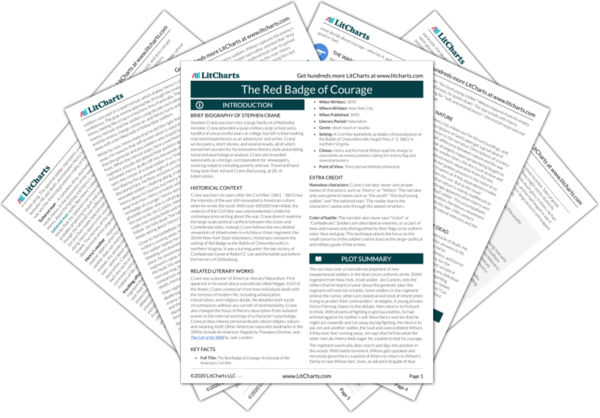 Below you will find the important quotes in The Red Badge of Courage related to the theme of The Living and the Dead.
Chapter 3 Quotes
The ranks opened covertly to avoid the corpse. ... The youth looked keenly at the ashen face. ... He vaguely desired to walk around and around the body and stare; the impulse of the living to try to read in dead eyes the answer to the Question.
Related Characters: Henry Fleming (the youth)
Related Symbols: Corpses
Related Themes:

Chapter 5 Quotes
Under foot there were a few ghastly forms motionless. They lay twisted in fantastic contortions. Arms were bent and heads were turned in incredible ways. It seemed that the dead men must have fallen from some great height to get into such positions. They looked to be dumped out upon the ground from the sky.
Related Characters: Henry Fleming (the youth)
Related Symbols: Corpses
Related Themes:

Unlock with LitCharts A+
Chapter 7 Quotes
He was being looked at by a dead man who was seated with his back against a columnlike tree. The corpse was dressed in a uniform that once had been blue, but was now faded to a melancholy shade of green. The eyes, staring at the youth, had changed to the dull hue to be seen on the side of a dead fish. The mouth was open. Its red had changed to an appalling yellow. Over the gray skin of the face ran little ants. One was trundling some sort of a bundle along the upper lip. ... The dead man and the living man exchanged a long look.
Related Characters: Henry Fleming (the youth), Dead soldier
Related Symbols: Corpses
Related Themes:

Unlock with LitCharts A+
Chapter 8 Quotes
The battle was like the grinding of an immense and terrible machine to him. Its complexities and powers, its grim processes, fascinated him. He must go close and see it produce corpses.
Related Characters: Henry Fleming (the youth)
Related Symbols: Corpses
Related Themes:

Unlock with LitCharts A+
Chapter 11 Quotes
As he watched his envy grew ... Swift pictures of himself, apart, yet in himself, came to him—a blue desperate figure leading lurid charges with one knee forward and a broken blade high—a blue, determined figure standing before a crimson and steel assault, getting calmly killed on a high place before the eyes of all. He thought of the magnificent pathos of his dead body.
Related Characters: Henry Fleming (the youth)
Related Symbols: Corpses
Related Themes:

Unlock with LitCharts A+
Chapter 23 Quotes
The youth's friend went over the obstruction in a tumbling heap and sprang at the flag as a panther at prey. He pulled at it and, wrenching it free, swung up its red brilliancy with a mad cry of exultation even as the color bearer, gasping, lurched over in a final throe and, stiffening convulsively, turned his dead face to the ground.
Related Characters: Henry Fleming (the youth), Wilson (the loud young soldier, the youth's friend)
Related Symbols: Corpses, Wounds, Flags
Related Themes:

Unlock with LitCharts A+
Chapter 24 Quotes
He felt a quiet manhood, nonassertive but of sturdy and strong blood. He knew that he would no more quail before his guides wherever they should point. He had been to touch the great death, and found that, after all, it was but the great death. He was a man.
Related Characters: Henry Fleming (the youth)
Related Themes: