Download this LitChart! (PDF)
Teachers and parents! Struggling with distance learning? Our Teacher Edition on The Selfish Gene can help.

Welcome to the LitCharts study guide on Richard Dawkins's The Selfish Gene. Created by the original team behind SparkNotes, LitCharts are the world's best literature guides.

A concise biography of Richard Dawkins plus historical and literary context for The Selfish Gene.

A quick-reference summary: The Selfish Gene on a single page.

In-depth summary and analysis of every chapter of The Selfish Gene. Visual theme-tracking, too.

Explanations, analysis, and visualizations of The Selfish Gene's themes.

Description, analysis, and timelines for The Selfish Gene's characters.

Description, analysis, and timelines for The Selfish Gene's terms.

Explanations of The Selfish Gene's symbols, and tracking of where they appear.

An interactive data visualization of The Selfish Gene's plot and themes.

Richard Dawkins is a British evolutionary biologist and ethologist, meaning he primarily studies animal behavior. Dawkins was born on March 26, 1941 in Nairobi, which was part of the colony of British Kenya at the time. As a child, Dawkins believed in God because he thought such a complex and diverse natural world must have been designed by a maker, a higher power or intelligence that created it. However, Dawkins became a fervent atheist as a teenager, after he decided that evolution provided a more convincing explanation for the biodiversity of the natural world than religion did. Dawkins studied zoology at Balliol College, Oxford, and completed his graduate education under Nobel-prize winning ethologist Nikolaas Tinbergen, a pioneer in animal behavior research. Dawkins’ graduate research centered on understanding how animals make choices. He became famous worldwide after publishing The Selfish Gene in 1976 and popularizing the gene-centered view of evolution, in which animal behaviors are seen as primarily being motivated by the goal of preserving and disseminating the animal’s genes. The book had a profound impact on scientific research in evolutionary biology, and prompted the establishment of several new fields of research. Dawkins subsequently published The Extended Phenotype in 1982, which argues that genes not only manipulate the bodies of organisms, but also the entire world around us. Dawkins has held prestigious academic positions for most of his career, primarily at the University of California at Berkeley and Oxford University. Dawkins is known for his approachable writing style, which favors clarity and non-technical language. Many of his books have become international bestsellers, and The Selfish Gene is consistently ranked among the top ten nonfiction works ever written. Dawkins has also become an outspoken critic of religion, in both academic and political contexts. His views on this issue culminated in his1986 book The Blind Watchmaker, and more strongly in his 2006 book The God Delusion.
Get the entire The Selfish Gene LitChart as a printable PDF.
"My students can't get enough of your charts and their results have gone through the roof." -Graham S.
Download 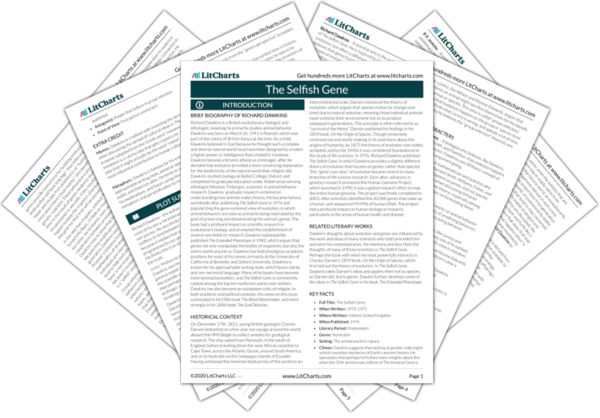 Historical Context of The Selfish Gene

On December 27th, 1831, young British geologist Charles Darwin embarked on a five-year sea voyage around the world aboard the HMS Beagle to collect samples for geological research. The ship sailed from Plymouth, in the south of England, before traveling down the west African coastline to Cape Town, across the Atlantic Ocean, around South America, and on to Australia via the Galapagos Islands of Ecuador. Having witnessed the immense biodiversity of the world on an intercontinental scale, Darwin conceived the theory of evolution, which argues that species evolve (or change over time) due to natural selection, meaning those individual animals most suited to their environment live on to produce subsequent generations. This principle is often referred to as “survival of the fittest.” Darwin published his findings in his 1859 book, On the Origin of Species. Though immensely controversial and world-shaking in its assertions about the origins of humanity, by 1875 the theory of evolution was widely accepted, and by the 1940s it was considered foundational to the study of life sciences. In 1976, Richard Dawkins published The Selfish Gene, in which Dawkins provides a slightly different theory of evolution that focuses on genes, rather than species. This “gene’s eye view” of evolution became central to many branches of life science research. Soon after, advances in genetics research prompted the Human Genome Project, which launched in 1990. It was a global research effort to map the entire human genome. The project was finally completed in 2003, after scientists identified the 40,000 genes that make up a human, and sequenced 99.99% of human DNA. The project had a profound impact on human biological research, particularly in the areas of human health and disease.

Other Books Related to The Selfish Gene

Dawkin's thoughts about evolution and genes are influenced by the work and ideas of many scientists who both preceded him and were his contemporaries. He mentions and describes the thoughts of many of those scientists in The Selfish Gene. Perhaps the book with which he most powerfully interacts is Charles Darwin's 1859 book, On the Origin of Species, which first laid out the theory of evolution. In The Selfish Gene, Dawkins takes Darwin's ideas and applies them not to species, as Darwin did, but to genes. Dawkin further develops some of the ideas in The Selfish Gene in his book The Extended Phenotype.
Key Facts about The Selfish Gene

Extra Credit for The Selfish Gene

Memes. Dawkins is credited with inventing the term “meme” when discussing the spread of cultural ideas in The Selfish Gene. A meme (adapted from the Greek word “mimemis,” meaning imitation) is a catchy idea that gets copied a lot. Some people joke that it might actually be the word “meme” that is Dawkins’ most influential contribution to human culture.

Metaphors. Dawkins is famous for his enthusiastic and approachable writing style, aimed at appealing to the general public and theorists alike. He tends to avoid technical jargon in his explanations, and favors using literary devices like metaphors and personification to make his arguments instead. 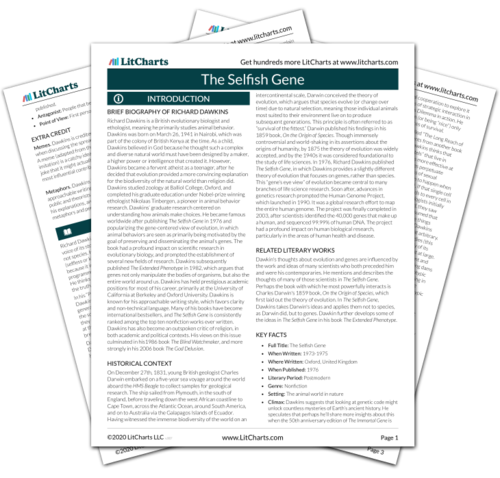 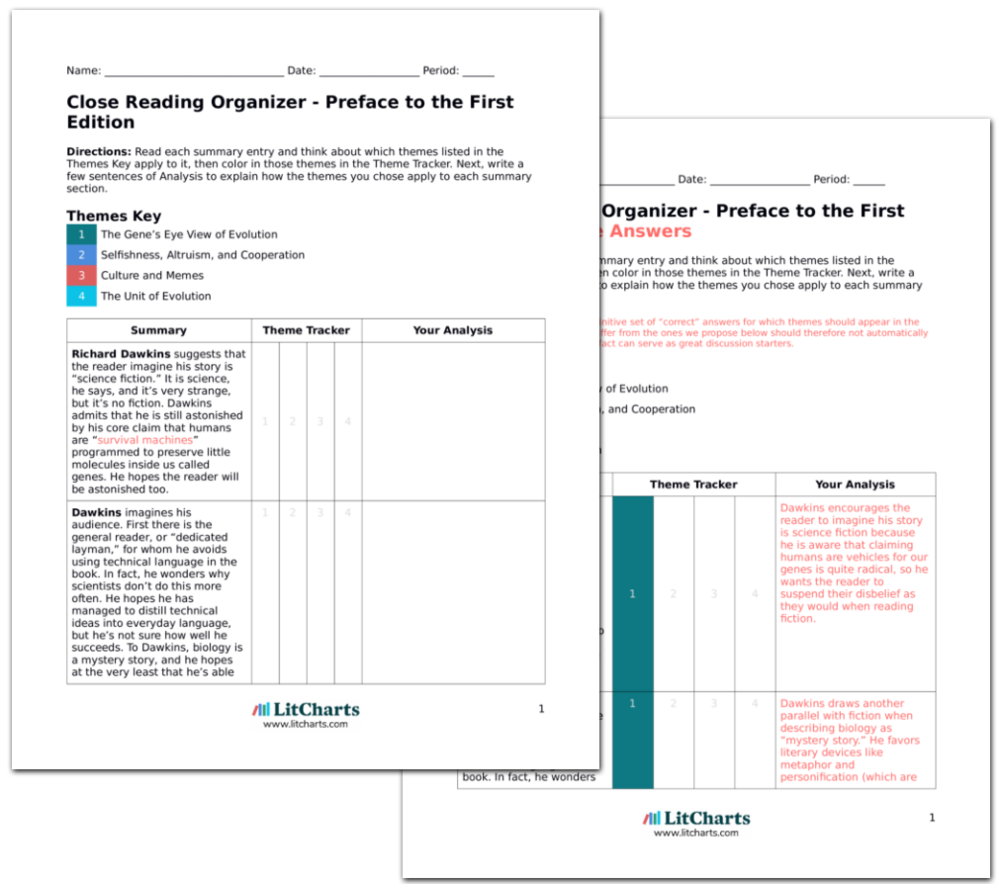