Download this LitChart! (PDF)
Teachers and parents! Struggling with distance learning? Our Teacher Edition on The Threepenny Opera can help.

Welcome to the LitCharts study guide on Bertolt Brecht's The Threepenny Opera. Created by the original team behind SparkNotes, LitCharts are the world's best literature guides.

A concise biography of Bertolt Brecht plus historical and literary context for The Threepenny Opera.

A quick-reference summary: The Threepenny Opera on a single page.

In-depth summary and analysis of every scene of The Threepenny Opera. Visual theme-tracking, too.

Explanations, analysis, and visualizations of The Threepenny Opera's themes.

Description, analysis, and timelines for The Threepenny Opera's characters.

Explanations of The Threepenny Opera's symbols, and tracking of where they appear.

An interactive data visualization of The Threepenny Opera's plot and themes.

Born into a middle-class family in Bavaria at the turn of the 20th century, Bertolt Brecht enjoyed a comfortable childhood—though later in life, he’d claim to have roots in the peasant class. At the onset of World War I, Brecht avoided conscription into the army by enrolling in medical school. His interests soon turned to drama, and in 1918, he wrote his first full-length play, Baal, a drama about a degenerate young poet. In the early 1920s, Brecht moved to Munich, where he continued writing plays and found himself hailed by critics as a harbinger of a new era in the theater. As Brecht’s star rose, his first marriage began to deteriorate—he sought the company of his lovers Elisabeth Hauptmann and Helene Weigel in Berlin, where he formed theatrical connections and built artistic collectives in the thriving cultural center even as the sun began to set on the Weimar Republic. Brecht and his collaborators sought new methods of theater-making which pointed out the hypocrisy of capitalism and the absurdity of art as escapism. The Threepenny Opera premiered in 1928, becoming a verified hit in Berlin and the impetus for a new experimental era in musicals worldwide. In 1933, when Hitler assumed power, Brecht fled Nazi Germany for Denmark and spent the subsequent years moving throughout Scandinavia as the Nazis occupied country after country, eventually fleeing to Los Angeles. Despite the tumult of the period, Brecht produced many of his most famous anti-fascist work during it: Life of Galileo, Mother Courage and her Children, and The Caucasian Chalk Circle are hailed today as emblematic of German Exilliteratur, or literature of the exiled. In the late 1940s, as the Red Scare took hold of America, Brecht found himself blacklisted by Hollywood and on trial for Communist sympathies (though a Marxist ideologically, Brecht was never a member of the Communist Party.) His testimony before the House Un-American Activities Committee was controversial, and the day after testifying, Brecht returned to Europe. Back in East Berlin in 1949, Brecht established the famous Berliner Ensemble, but his own individual artistic output slowed. Ongoing political strife in East Berlin distressed and disillusioned Brecht, and in 1956, he died of heart failure. His artistic contributions to drama remain influential to this day, and the epic theater movement’s reverberations can be felt throughout contemporary theater, film, and opera.
Get the entire The Threepenny Opera LitChart as a printable PDF.
"My students can't get enough of your charts and their results have gone through the roof." -Graham S.
Download 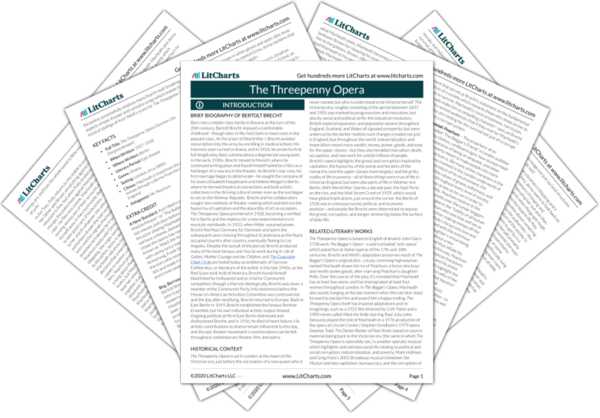 Historical Context of The Threepenny Opera

The Threepenny Opera is set in London at the dawn of the Victorian era, just before the coronation of a new queen who is never named, but who is understood to be Victoria herself. The Victorian era, roughly consisting of the period between 1837 and 1901 was marked by progressivism and innovation, but also by social and political strife: the industrial revolution, British imperial expansion, and population booms throughout England, Scotland, and Wales all signaled prosperity, but were undercut by the darker realities such changes created not just in England, but throughout the world. Industrialization and imperialism meant more wealth, money, power, goods, and ease for the upper classes—but they also heralded starvation, death, occupation, and overwork for untold millions of people. Brecht’s opera highlights the greed and corruption inspired by capitalism, the hypocrisy of the pomp and heraldry of the monarchy (and the upper classes more largely,) and the gritty reality of life in poverty—all of these things were true of life in Victorian England, but were also parts of life in Weimar-era Berlin. With World War I barely a decade past, the Nazi Party on the rise, and the Wall Street Crash of 1929, which would have global implications, just around the corner, the Berlin of 1928 was in a tenuous social, political, and economic position—and people like Brecht were determined to expose the greed, corruption, and danger simmering below the surface of daily life.

Other Books Related to The Threepenny Opera

The Threepenny Opera is based on Englsih dramatist John Gay’s 1728 work The Beggar’s Opera—a satirical ballad “anti-opera” which poked fun at Italian operas of the 17th and 18th centuries. Brecht and Weill’s adaptation preserves much of The Beggar’s Opera’s original plot—a lusty, conniving highwayman named Macheath draws the ire of Peachum, a fence who buys and resells stolen goods, after marrying Peachum’s daughter Polly. Over the course of the play, it’s revealed that Macheath has at least two wives, and has impregnated at least four women throughout London. In The Beggar’s Opera, Macheath also avoids hanging at the last moment when the narrator steps forward to pardon him and award him a happy ending. The Threepenny Opera itself has inspired adaptations and re-imaginings, such as a 1931 film directed by G.W. Pabst and a 1989 movie called Mack the Knife starring Raul Julia (who famously played the role of Macheath in a 1976 production of the opera at Lincoln Center.) Stephen Sondheim’s 1979 opera Sweeney Todd: The Demon Barber of Fleet Street, based on source material dating back to the Victorian era (the same in which The Threepenny Opera is ostensibly set,) is another operatic musical which highlights and satirizes social ills relating to political and social corruption, industrialization, and poverty. Mark Hollman and Greg Kotis’s 2001 Broadway musical Urinetown: the Musical satirizes capitalism, bureaucracy, and the corruption of the police, purposefully employs many fourth-wall-breaking aspects of epic theater and contains songs which imitate the musical stylings of Kurt Weill’s score for The Threepenny Opera.
Key Facts about The Threepenny Opera

Extra Credit for The Threepenny Opera

A New Standard. Kurt Weill composed “Die Moritat von Mackie Messer,” or “The Ballad of Mack the Knife,” at the very last minute, just days before the show’s 1928 premiere, after the actor playing Macheath grew angry that his character did not have a theme, demanded one. The song, which opens and closes the opera, has now become a beloved standard widely known as “Mack the Knife” after a 1954 translation of the song with catchy lyrics made waves stateside. Bobby Darin, Louis Armstrong, Frank Sinatra, and Ella Fitzgerald are just a few of the stars who recorded the song throughout the 1950s and ‘60s and made it the popular jazz standard it is today—many aren’t even aware of its origins.

Beg, Borrow, Steal. Innovative theatrical mind though he was, Bertolt Brecht was not the originator of the idea to transform John Gay’s 18th-century work The Beggar’s Opera into a modern-day, German-language play. In 1927, Elisabeth Hauptmann—a German writer and, at the time, Brecht’s lover—began translating Gay’s opera herself. When a wealthy producer, Ernst Josef Aufricht, rejected one of Brecht’s ideas for a new commission for the Theater am Schiffbauerdamm, Brecht quickly claimed he had another idea—and stated that he himself had been working on a translation of The Beggar’s Opera. Aufricht loved the idea, and Brecht presented his lover’s work to the producer—as his own. 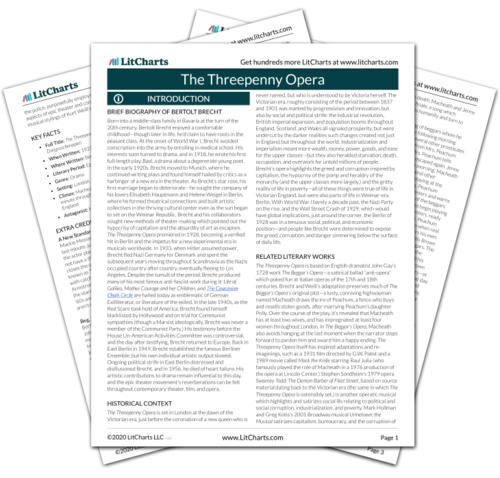 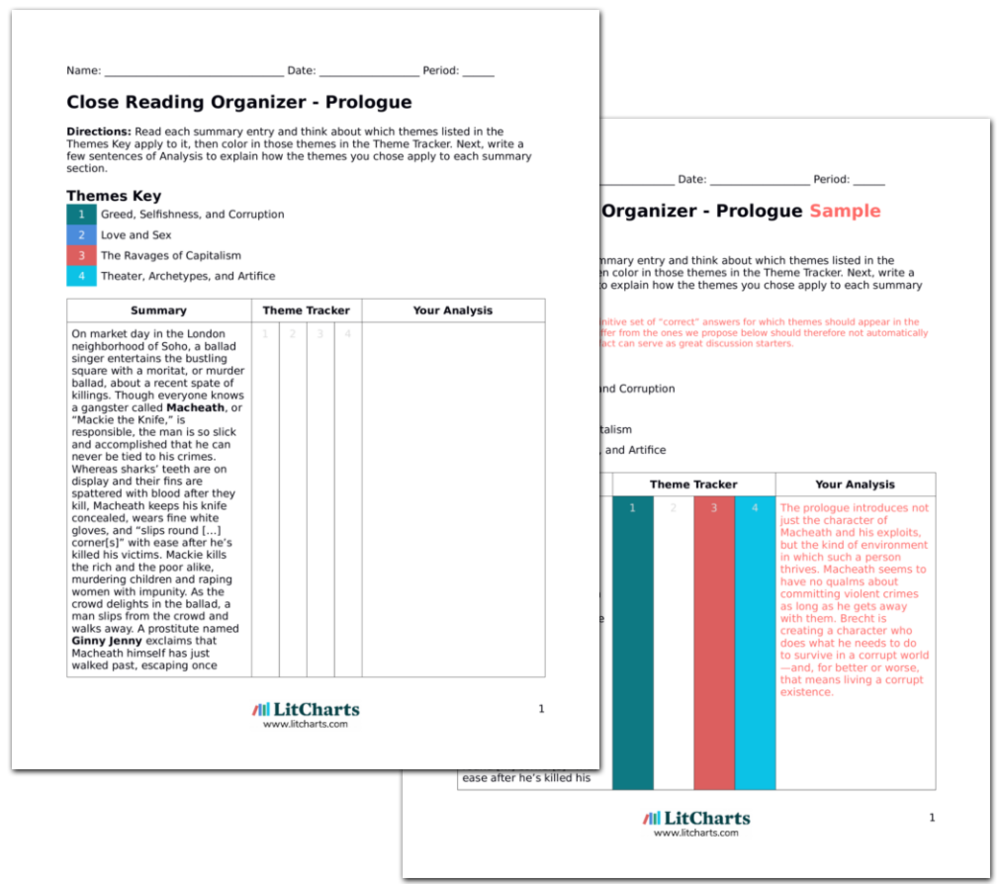