Download this LitChart! (PDF)
Teachers and parents! Struggling with distance learning? Our Teacher Edition on The Beggar’s Opera can help.

Welcome to the LitCharts study guide on John Gay's The Beggar’s Opera. Created by the original team behind SparkNotes, LitCharts are the world's best literature guides.

A concise biography of John Gay plus historical and literary context for The Beggar’s Opera.

A quick-reference summary: The Beggar’s Opera on a single page.

In-depth summary and analysis of every scene of The Beggar’s Opera. Visual theme-tracking, too.

Explanations, analysis, and visualizations of The Beggar’s Opera's themes.

Description, analysis, and timelines for The Beggar’s Opera's characters.

Description, analysis, and timelines for The Beggar’s Opera's terms.

Explanations of The Beggar’s Opera's symbols, and tracking of where they appear.

An interactive data visualization of The Beggar’s Opera's plot and themes.

John Gay was born to a prominent merchant family in the southwestern English town of Barnstaple. After becoming an orphan on his 10th birthday, Gay went to live with his uncle, a local minister. He couldn’t afford university, so he became a silk merchant’s apprentice in London, but he found the profession uninteresting and quit after four years. Instead, he went to work for his former schoolmate Aaron Hill, a London writer, publisher, and theater producer. Soon, Gay stared writing comic poems and plays for Hill’s newspaper The British Apollo. He quickly realized that, whether he liked it or not, he could only make a living as a writer if he found a wealthy patron. Fortunately, the Duchess of Monmouth, Earl of Clarendon, and Earl of Burlington were happy to employ him for most of his early career. Thanks to his connections with the nobility, he even got to live rent-free in central London and become the Commissioner of the State Lottery. But he was always ashamed to have survived through these connections rather than on literary merit alone, and he frequently mocked himself to this effect in his work. Still, he began receiving modest recognition for his writing the mid-1710s, particularly with the long poem Trivia; or the Art of Walking the Streets of London and the racy 1717 play Three Hours after Marriage (which raised a brief moral panic in London). His 1720 book Poems on Several Occasions made him a small fortune, but he promptly lost it all in the stock market. In the mid-1720s, he finally decided to start writing for the broader public, instead of the nobility. In 1728 he wrote and staged The Beggar’s Opera, which remains his best-known work.
Get the entire The Beggar’s Opera LitChart as a printable PDF.
"My students can't get enough of your charts and their results have gone through the roof." -Graham S.
Download 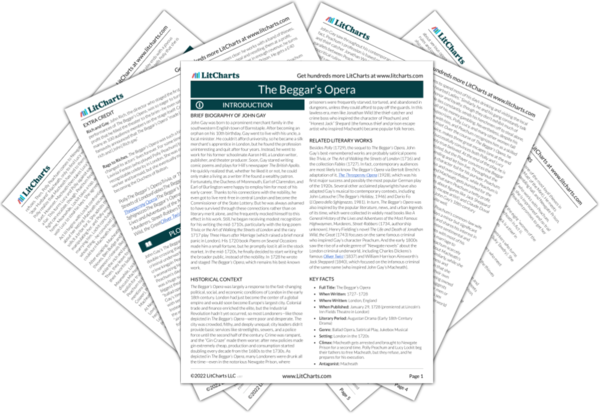 Historical Context of The Beggar’s Opera

The Beggar’s Opera was largely a response to the fast-changing political, social, and economic conditions of London in the early 18th century. London had just become the center of a global empire and would soon become Europe’s largest city. Colonial trade and finance enriched the elite, but the Industrial Revolution hadn’t yet occurred, so most Londoners—like those depicted in The Beggar’s Opera—were poor and desperate. The city was crowded, filthy, and deeply unequal; city leaders didn’t provide basic services like streetlights, sewers, and a police force until the second half of the century. Crime was rampant, and the “Gin Craze” made them worse: after new policies made gin extremely cheap, production and consumption started doubling every decade from the 1680s to the 1730s. As depicted in The Beggar’s Opera, many Londoners were drunk all the time—even in the notorious Newgate Prison, where prisoners were frequently starved, tortured, and abandoned in dungeons, unless they could afford to pay off the guards. In this lawless era, men like Jonathan Wild (the thief-catcher and crime boss who inspired the character of Peachum) and “Honest Jack” Shepard (the famous thief and prison escape artist who inspired Macheath) became popular folk heroes.

Other Books Related to The Beggar’s Opera

Besides Polly (1729), the sequel to The Beggar’s Opera, John Gay’s best-remembered works are probably satirical poems like Trivia, or The Art of Walking the Streets of London (1716) and the collection Fables (1727). In fact, contemporary audiences are most likely to know The Beggar’s Opera via Bertolt Brecht’s adaptation of it, The Threepenny Opera (1928), which was his first major success and possibly the most popular German play of the 1920s. Several other acclaimed playwrights have also adapted Gay’s musical to contemporary contexts, including John Latouche (The Beggar’s Holiday, 1946) and Dario Fo (L’Opera dello Sghignazzo, 1981). In turn, The Beggar’s Opera was also inspired by the popular literature, news, and urban legends of its time, which were collected in widely read books like A General History of the Lives and Adventures of the Most Famous Highwaymen, Murderers, Street-Robbers (1734, authorship unknown). Henry Fielding’s novel The Life and Death of Jonathan Wild, the Great (1743) focuses on the same famous criminal who inspired Gay’s character Peachum. And the early 1800s saw the rise of a whole genre of “Newgate novels” about the London criminal underworld, including Charles Dickens’s famous Oliver Twist (1837) and William Harrison Ainsworth’s Jack Sheppard (1840), which focused on the infamous criminal of the same name (who inspired John Gay’s Macheath).
Key Facts about The Beggar’s Opera

Extra Credit for The Beggar’s Opera

Rich and Gay. John Rich, the director who staged the first performances of The Beggar’s Opera, was so eager to turn a profit that he filled the theater to the brim—he even sat as many as 100 audience members on the stage itself. Critics famously announced that The Beggar’s Opera “made [John] Gay rich and [John] Rich gay.”

Rags to Riches. The Beggar’s Opera was such a hit that it changed its actors’ lives forever. For some time, the actress Lavinia Fenton (who played Polly Peachum) became the most recognizable celebrity in London. She was once a child sex worker and barmaid, but she eventually married into nobility, becoming the Duchess of Bolton. 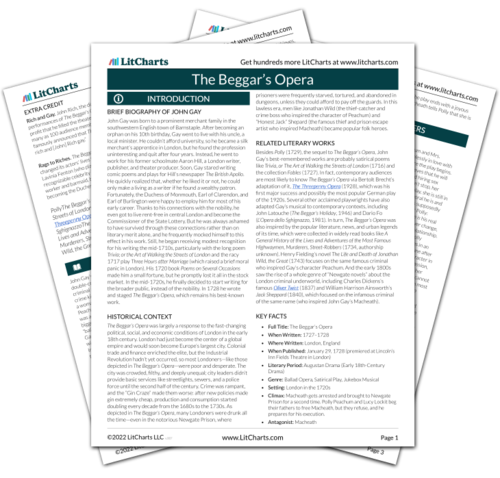 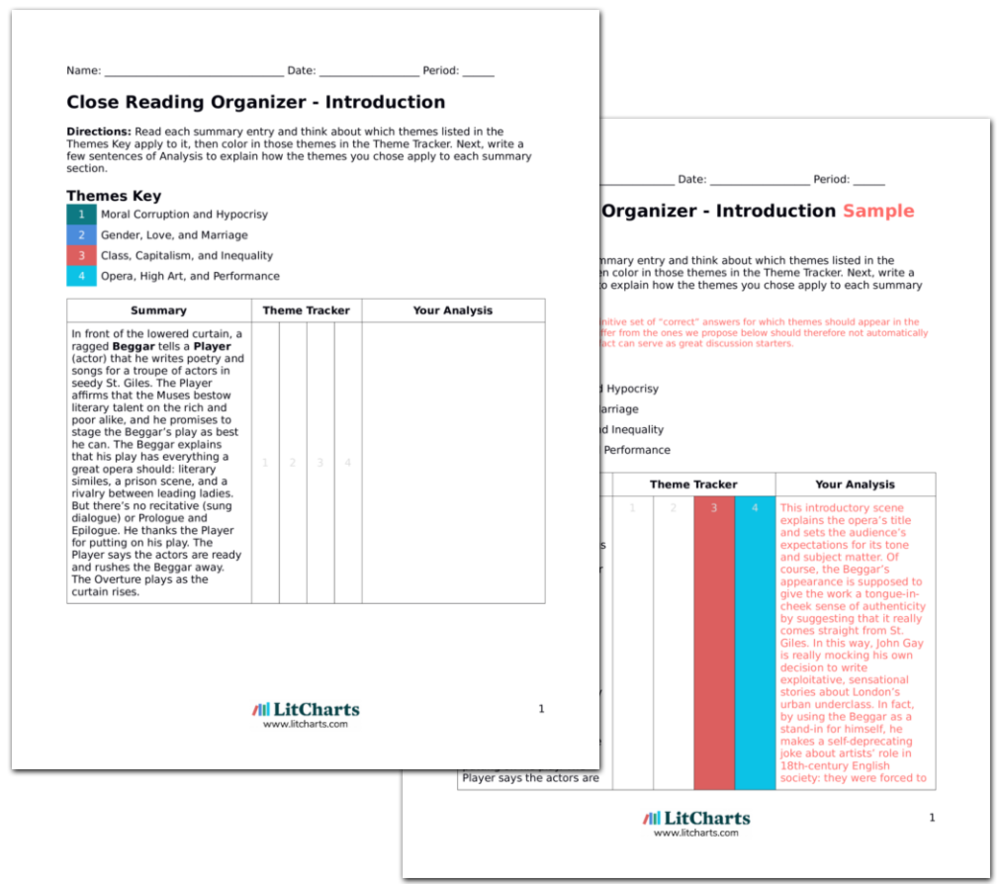