Download this LitChart! (PDF)
Teachers and parents! Struggling with distance learning? Our Teacher Edition on Washington Black can help.

Welcome to the LitCharts study guide on Esi Edugyan's Washington Black. Created by the original team behind SparkNotes, LitCharts are the world's best literature guides.

A concise biography of Esi Edugyan plus historical and literary context for Washington Black.

A quick-reference summary: Washington Black on a single page.

In-depth summary and analysis of every chapter of Washington Black. Visual theme-tracking, too.

Explanations of Washington Black's symbols, and tracking of where they appear.

An interactive data visualization of Washington Black's plot and themes.

Edugyan was born to two Ghanaian immigrants and raised in Calgary, Alberta. She studied creative writing at the University of Victory and published her debut novel, The Second Life of Samuel Tyne, at age 26; it was short-listed for the Hurston-Wright Legacy Award in 2005. She also earned a master’s degree from the Johns Hopkins Writing Seminars. Despite favorable reviews for her first novel, Edugyan had difficulty finding a publisher for her second manuscript. She spent time as a writer-in-residence in Germany and wrote another novel, Half-Blood Blues, about a jazz musician in Berlin between the World Wars. Published in 2011, the book was short-listed for several major literary prizes, including the Man Booker Prize, and it won the Giller Prize. Edugyan then published her first nonfiction book, Dreaming of Elsewhere, in March 2014. Her third novel, Washington Black, was published in 2018 and won the Giller Prize, making Edugyan only the third novelist to win the award twice. Edugyan currently lives in Victoria, British Columbia, and is married to novelist Steven Price, whom she met at the University of Victoria.
Get the entire Washington Black LitChart as a printable PDF.
"My students can't get enough of your charts and their results have gone through the roof." -Graham S.
Download 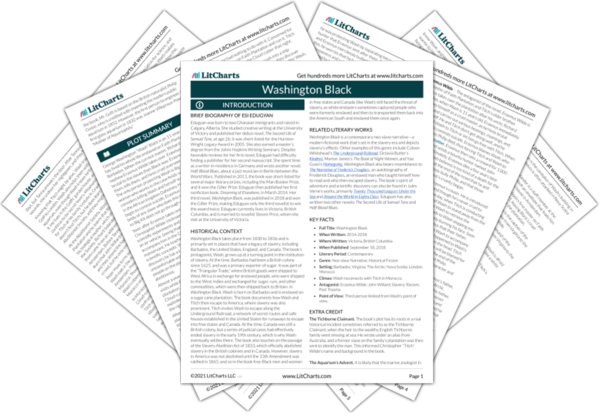 Washington Black takes place from 1830 to 1836 and is primarily set in places that have a legacy of slavery, including Barbados, the United States, England, and Canada. The book’s protagonist, Wash, grows up at a turning point in the institution of slavery. At the time, Barbados had been a British colony since 1625, and was a primary exporter of sugar. It was part of the “Triangular Trade,” where British goods were shipped to West Africa in exchange for enslaved people, who were shipped to the West Indies and exchanged for sugar, rum, and other commodities, which were then shipped back to Britain. In Washington Black, Wash is born on Barbados and is enslaved on a sugar cane plantation. The book documents how Wash and Titch then escape to America, where slavery was also prominent. Titch invites Wash to escape along the Underground Railroad, a network of secret routes and safe houses established in the United States for runaways to escape into free states and Canada. At the time, Canada was still a British colony, but a series of judicial cases had effectively ended slavery in the early 19th century, which is why Wash eventually settles there. The book also touches on the passage of the Slavery Abolition Act of 1833, which officially abolished slavery in the British colonies and in Canada. However, slavery in America was not abolished until the 13th Amendment was ratified in 1865, and so in the book free Black men and women in free states and Canada (like Wash) still faced the threat of slavery, as white enslavers sometimes captured people who were formerly enslaved and then to transported them back into the American South and enslaved them once again.

Other Books Related to Washington Black

Washington Black is a contemporary neo-slave narrative—a modern fictional work that’s set in the slavery era and depicts slavery’s effects. Other examples of this genre include Colson Whitehead’s The Underground Railroad, Octavia Butler’s Kindred, Marlon James’s The Book of Night Women, and Yaa Gyasi’s Homegoing. Washington Black also bears resemblance to The Narrative of Frederick Douglass, an autobiography of Frederick Douglass, an enslaved man who taught himself how to read and who then escaped slavery. The book’s spirit of adventure and scientific discovery can also be found in Jules Verne’s works, primarily Twenty Thousand Leagues Under the Sea and Around the World in Eighty Days. Edugyan has also written two other novels: The Second Life of Samuel Tyne and Half-Blood Blues.
Key Facts about Washington Black

The Tichborne Claimant. The book’s plot has its roots in a real historical incident sometimes referred to as the Tichborne Claimant, when the heir to the wealthy English Tichborne family went missing at sea. He wrote under an alias from Australia, and a former slave on the family’s plantation was then sent to identify the man. This informed Christopher “Titch” Wilde’s name and background in the book.

The Aquarium’s Advent. It is likely that the marine zoologist in the book, Mr. Goff, is based on the British naturalist Philip Gosse, who is credited with inventing the modern public aquarium in 1852. However, the first person to engineer the first glass aquarium in 1832 was Jeanne Villepreux-Power, the “Mother of Aquariophily.” 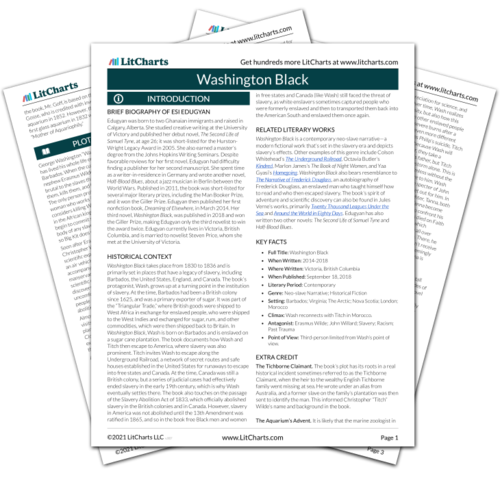 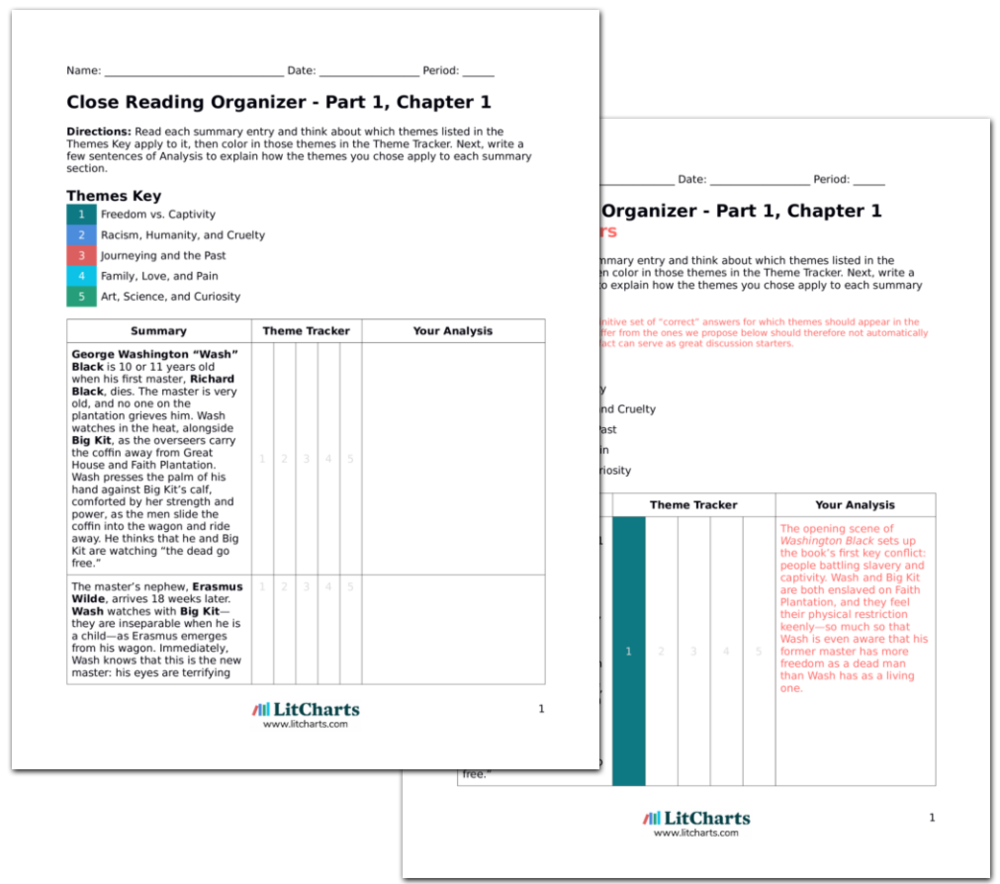