Welcome to the LitCharts study guide on Madeleine L'Engle's A Wrinkle in Time. Created by the original team behind SparkNotes, LitCharts are the world's best literature guides.

A Wrinkle in Time: Introduction

A concise biography of Madeleine L'Engle plus historical and literary context for A Wrinkle in Time.

A Wrinkle in Time: Plot Summary

A quick-reference summary: A Wrinkle in Time on a single page.

In-depth summary and analysis of every chapter of A Wrinkle in Time. Visual theme-tracking, too.

A Wrinkle in Time: Themes

Explanations, analysis, and visualizations of A Wrinkle in Time's themes.

A Wrinkle in Time: Quotes

A Wrinkle in Time's important quotes, sortable by theme, character, or chapter.

A Wrinkle in Time: Characters

Description, analysis, and timelines for A Wrinkle in Time's characters.

A Wrinkle in Time: Symbols

Explanations of A Wrinkle in Time's symbols, and tracking of where they appear.

A Wrinkle in Time: Theme Wheel

An interactive data visualization of A Wrinkle in Time's plot and themes.

Madeleine L'Engle wrote her first story when she was five years old. She did not perform well at the NYC private school she attended, and spent the subsequent years at different boarding schools and traveling extensively with her parents, who disagreed about how she ought to be raised. France and Switzerland were among the countries she lived in in her youth. Her father died in 1935 while she was living at a boarding school in South Carolina. In 1937, she attended Smith College, and graduated four years later cum laude. The next year, once she had moved to New York City, she met her husband, actor Hugh Franklin, when she had a role in Chekhov's The Cherry Orchard, and they married four years later. They had two children, Josephine and Bion, and adopted Maria, the 7-year-old daughter of family friends who had died. For a while the family lived in an ancient farmhouse in Connecticut and ran a general store to supply their income. In 1959, they returned to New York City so Hugh could keep acting, during which time L'Engle first thought of and wrote A Wrinkle in Time. She had a hard time finding a publisher, and was rejected over thirty times before Farrar, Straus and Giroux picked it up in 1962. Many of her other books occur in the same universe as that of A Wrinkle in Time. In her years in New York City, L'Engle (a strong Episcopalian) was a volunteer librarian and writer-in-residence at the Cathedral of St. John the Divine, where she was buried after dying of natural causes in 2007.
Get the entire A Wrinkle in Time LitChart as a printable PDF.
"My students can't get enough of your charts and their results have gone through the roof." -Graham S.
Download 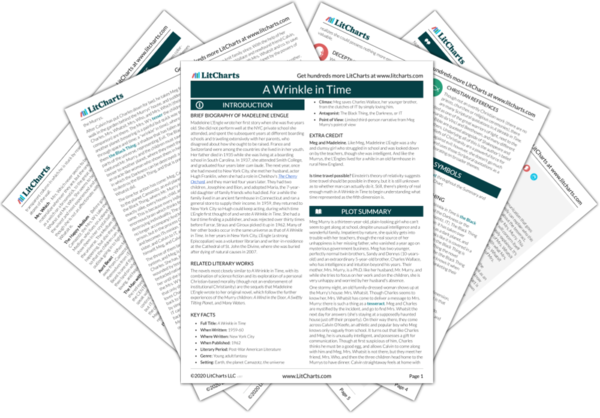 Other Books Related to A Wrinkle in Time

The novels most closely similar to A Wrinkle in Time, with its combination of science fiction and its exploration of a personal Christian-based morality (though not an endorsement of institutional Christianity) are the sequels that Madeleine L'Engle wrote to her original novel, which follow the further experiences of the Murry children: A Wind in the Door, A Swiftly Tilting Planet, and Many Waters.
Key Facts about A Wrinkle in Time

Extra Credit for A Wrinkle in Time

Meg and Madeleine. Like Meg, Madeleine L'Engle was a shy and clumsy girl who struggled in school and was looked down on by the teachers, though she was intelligent. And like the Murrys, the L'Engles lived for a while in an old farmhouse in rural New England.

Is time travel possible? Einstein's theory of relativity suggests time travel should be possible in theory, but it is still unknown as to whether man can actually do it. Still, there's plenty of real enough math in A Wrinkle in Time to begin understanding what time represented as the fifth dimension is. 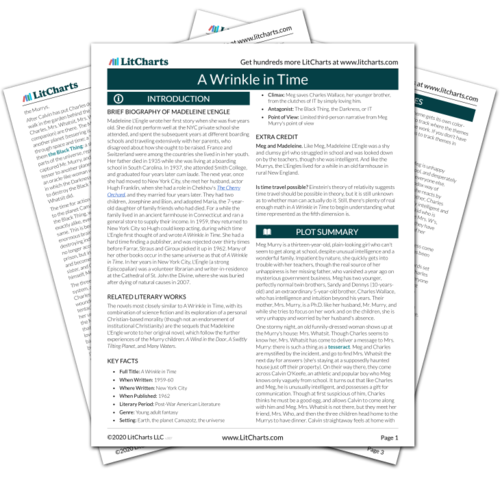 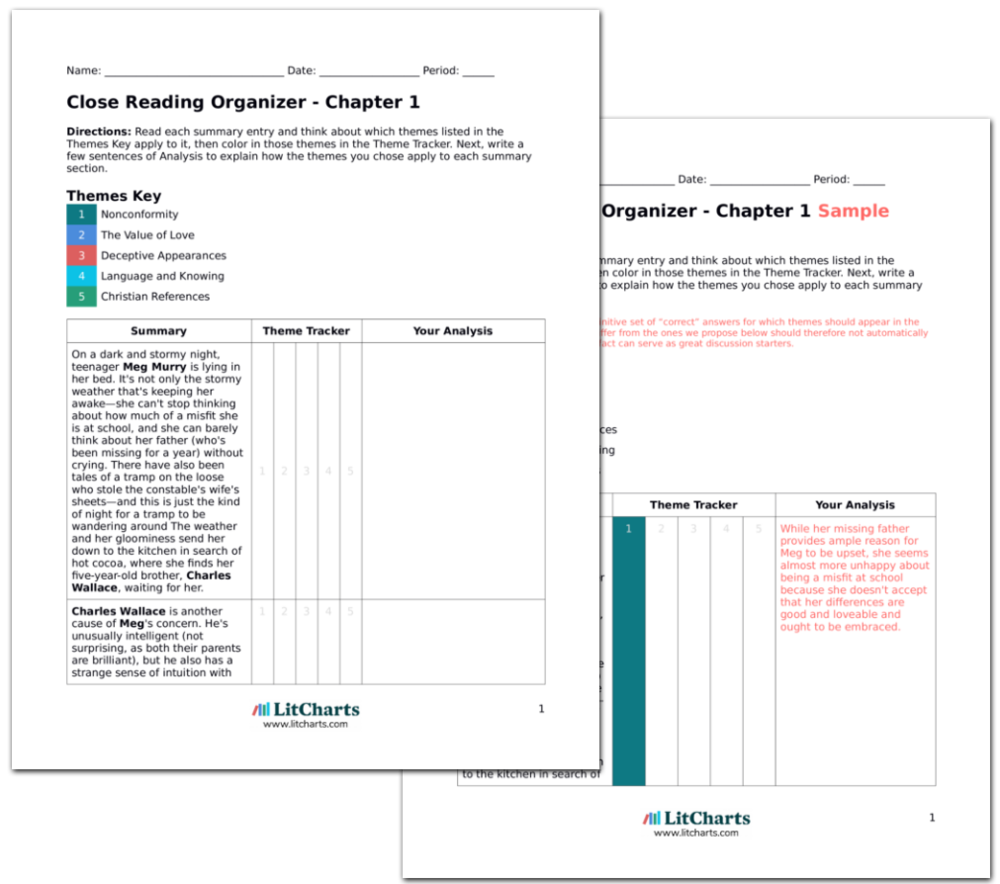