Download this LitChart! (PDF)
Teachers and parents! Struggling with distance learning? Our Teacher Edition on Coraline can help.

Welcome to the LitCharts study guide on Neil Gaiman's Coraline. Created by the original team behind SparkNotes, LitCharts are the world's best literature guides.

A concise biography of Neil Gaiman plus historical and literary context for Coraline.

A quick-reference summary: Coraline on a single page.

In-depth summary and analysis of every chapter of Coraline. Visual theme-tracking, too.

Explanations of Coraline's symbols, and tracking of where they appear.

An interactive data visualization of Coraline's plot and themes.

Neil Gaiman is renowned the world over for his darkly fanciful fantasy and sci-fi works, which range from graphic novels to children’s books to literature for adults. Born in Portsmouth to Jewish parents who, shortly after Neil’s birth, converted to Scientology, Gaiman’s early influences included C.S. Lewis’s The Chronicles of Narnia and J.R.R. Tolkien’s The Lord of the Rings. Because Gaiman’s father David, the head of the UK branch of the Church of Scientology, was often embroiled in public relations scandals tied to the church’s controversial practices, Gaiman bounced from school to school as a child and has described himself as interviews as a “feral child who was raised in libraries.” He has also noted that he himself is not a Scientologist. Gaiman began his writing career in the 1980s as a journalist and biographer, penning books about the band Duran Duran and Douglas Adams, the author of The Hitchhiker’s Guide to the Galaxy. After his breakout series Sandman, published by DC Comics, gained worldwide renown in the early 1990s, Gaiman’s literary career took off in earnest. Gaiman’s most famous titles include Stardust, Good Omens (cowritten with Terry Pratchett,) American Gods, and The Ocean at the End of the Lane. American Gods and Coraline have been recognized by the Hugo Awards, the Nebula Awards, and the Bram Stoker Awards, while 2008’s The Graveyard Book earned Gaiman the British Carnegie Medal and the American Newbery Medal for excellence in children’s literature. Gaiman’s work has been widely adapted for film, radio, and television, garnering nominations at the Academy Awards, the BAFTAs, the Primetime Emmy Awards, and the Saturn Awards.
Get the entire Coraline LitChart as a printable PDF.
"My students can't get enough of your charts and their results have gone through the roof." -Graham S.
Download 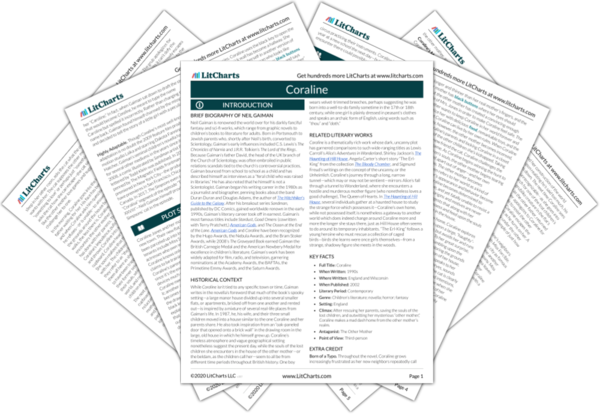 While Coraline isn’t tied to any specific town or time, Gaiman writes in the novella’s foreword that much of the book’s spooky setting—a large manor house divided up into several smaller flats, or apartments, bricked off from one another and rented out—is inspired by a mixture of several real-life places from Gaiman’s life. In 1987, he, his wife, and their three small children moved into a house similar to the one Coraline and her parents share. He also took inspiration from an “oak-paneled door that opened onto a brick wall” in the drawing room in the large, old house in which he himself grew up. Coraline’s timeless atmosphere and vague geographical setting nonetheless suggest the present day, while the souls of the lost children she encounters in the house of the other mother—or the beldam, as the children call her—seem to all be from different time periods throughout British history. One boy wears velvet-trimmed breeches, perhaps suggesting he was born into a well-to-do family sometime in the 17th or 18th century, while one girl is plainly dressed in peasant’s clothes and speaks an archaic form of English, using words such as “thou” and “doth.”

Other Books Related to Coraline

Coraline is a thematically rich work whose dark, uncanny plot has garnered comparisons to such wide-ranging titles as Lewis Carroll’s Alice’s Adventures in Wonderland, Shirley Jackson’s The Haunting of Hill House, Angela Carter’s short story “The Erl-King” from the collection The Bloody Chamber, and Sigmund Freud’s writings on the concept of the uncanny, or the Unheimlich. Coraline’s journey through a long, narrow tunnel—which may or may not be sentient—mirrors Alice’s fall through a tunnel to Wonderland, where she encounters a hostile and murderous mother figure (who nonetheless loves a good challenge), The Queen of Hearts. In The Haunting of Hill House, several individuals gather at a haunted house to study the strange force which possesses it—Coraline’s own home, while not possessed itself, is nonetheless a gateway to another world which does indeed change around Coraline more and more the longer she stays there, just as Hill House often seems to do around its temporary inhabitants. “The Erl-King” follows a young heroine who must rescue a collection of caged birds—birds she learns were once girls themselves—from a strange, shadowy figure she meets in the woods.
Key Facts about Coraline

Born of a Typo. Throughout the novel, Coraline grows increasingly frustrated as her new neighbors repeatedly call her “Caroline.” In fact, when Gaiman sat down to draft the story that would become Coraline, he meant to type the name Caroline but spelled it incorrectly. Rather than changing the name back, Gaiman found himself charmed by the misspelling, and decided to tell the story of a little girl with a peculiar name.

Highly Adaptable. Though Coraline’s most well-known adaptation is no doubt the 2009 feature film produced by stop-motion studio Laika and starring Dakota Fanning and Teri Hatcher, Gaiman’s seminal children’s novella has been adapted for several other mediums in the years since its publication. In 2008, a comic illustrated by Sandman artist P. Craig Russell and lettered by Todd Klein was published. In 2009, a musical penned by The Magnetic Fields frontman Stephin Merritt premiered in New York City—the production has gone on to have premieres in San Francisco, Chicago, and Edmonton, Canada. In 2017, The Simpsons even spoofed Coraline in the “Coralisa” segment of the episode “Treehouse of Horror XXVIII”—Neil Gaiman himself provided the voice of the Simpsons’ cat in the episode. 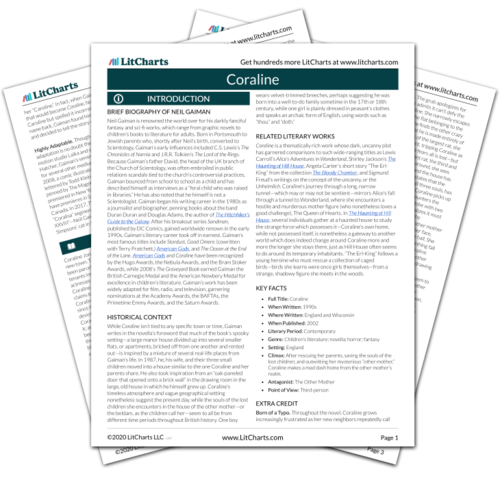 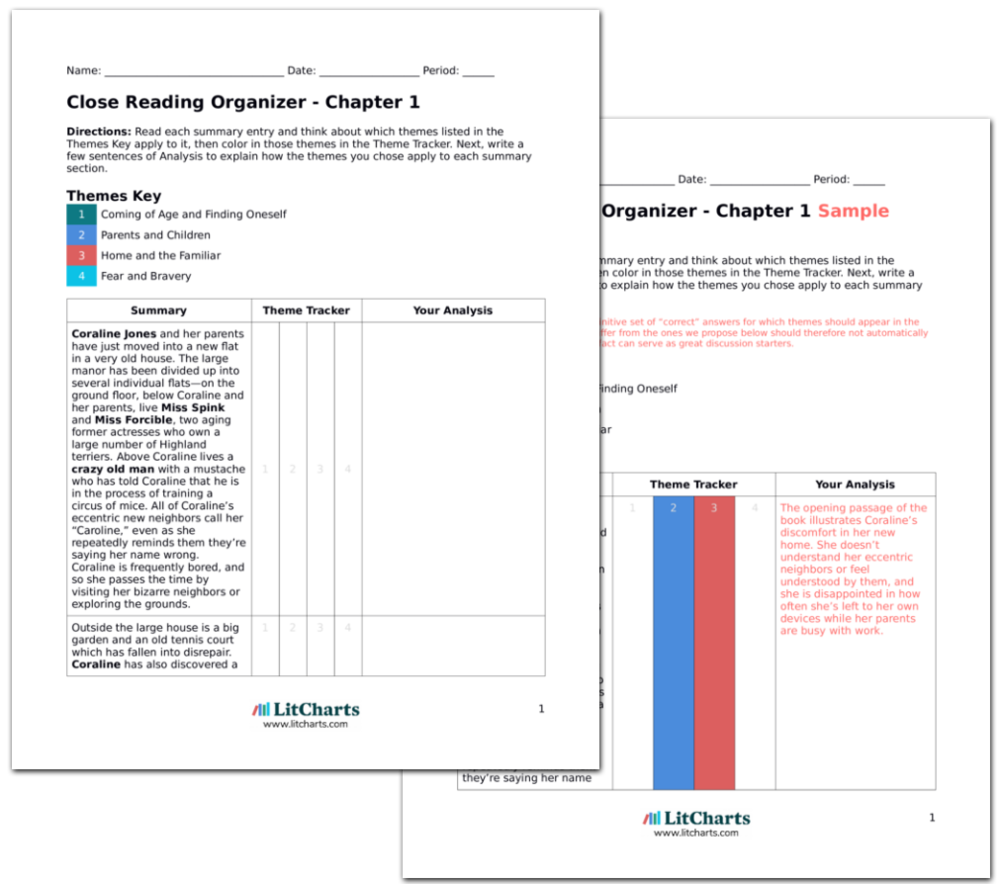