Download this LitChart! (PDF)
Teachers and parents! Struggling with distance learning? Our Teacher Edition on Good Omens can help.

Welcome to the LitCharts study guide on Neil Gaiman and Terry Pratchett's Good Omens. Created by the original team behind SparkNotes, LitCharts are the world's best literature guides.

A concise biography of Neil Gaiman and Terry Pratchett plus historical and literary context for Good Omens.

A quick-reference summary: Good Omens on a single page.

In-depth summary and analysis of every chapter of Good Omens. Visual theme-tracking, too.

Explanations of Good Omens's symbols, and tracking of where they appear.

An interactive data visualization of Good Omens's plot and themes.

Sir Terry Pratchett was born in Beaconsfield, England, in 1948. He was a middling student with an interest in astronomy, though he was also an avid reader. As a young man, he worked as a journalist and a press officer for an English electricity board. He published his first novel, The Carpet People, in 1971 and finally quit his job at the electricity board to pursue writing exclusively in 1987. It wasn’t long after this that Good Omens’s co-author, Neil Gaiman, met Pratchett when he was asked to interview him. Gaiman, born in 1960, was also a middling student and a prolific reader who got his start in journalism. At the time that the two collaborated on Good Omens, Gaiman wasn’t yet the household name he is today, though he had already begun writing the Sandman series for DC Comics. Both writers have earned numerous awards and accolades: Pratchett was knighted for services to literature in 2009 and Gaiman’s novel The Graveyard Book won the 2008 Newbery Medal. In December 2007, Pratchett was diagnosed with early-onset Alzheimer’s disease. He continued writing until his death in 2015, and he also dedicated his final years to raising awareness and research money for Alzheimer’s disease. Following Pratchett’s final wishes, Gaiman continued to pursue a screen adaptation of Good Omens after Pratchett’s death, which ultimately resulted in a 2019 limited series on Amazon Prime.
Get the entire Good Omens LitChart as a printable PDF.
"My students can't get enough of your charts and their results have gone through the roof." -Graham S.
Download 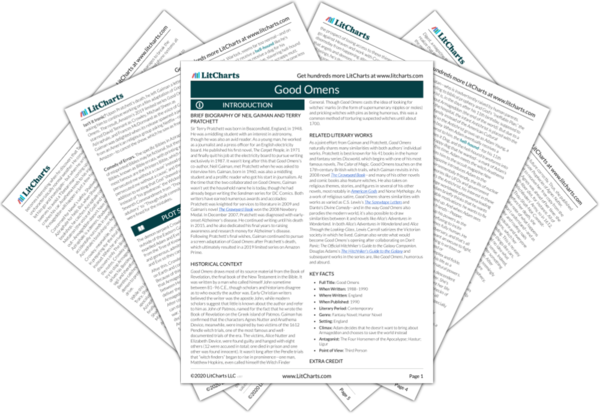 Good Omens draws most of its source material from the Book of Revelation, the final book of the New Testament in the Bible. It was written by a man who called himself John sometime between 81–96 C.E., though scholars and historians disagree as to who exactly the author was. Early Christian writers believed the writer was the apostle John, while modern scholars suggest that little is known about the author and refer to him as John of Patmos, named for the fact that he wrote the Book of Revelation on the Greek island of Patmos. Gaiman has confirmed that the characters Agnes Nutter and Anathema Device, meanwhile, were inspired by two victims of the 1612 Pendle witch trials, one of the most famous and well-documented trials of the era. The victims, Alice Nutter and Elizabeth Device, were found guilty and hanged with eight others (12 were accused in total; one died in prison and one other was found innocent). It wasn’t long after the Pendle trials that “witch finders” began to rise in prominence—one man, Matthew Hopkins, even called himself the Witch Finder General. Though Good Omens casts the idea of looking for witches’ marks (in the form of supernumerary nipples or moles) and pricking witches with pins as being humorous, this was a common method of torturing suspected witches until about 1700.

Other Books Related to Good Omens

As a joint effort from Gaiman and Pratchett, Good Omens naturally shares many similarities with both authors’ individual works. Pratchett is best known for his 41 books in the humor and fantasy series Discworld, which begins with one of his most famous novels, The Color of Magic. Good Omens touches on the 17th-century British witch trails, which Gaiman revisits in his 2008 novel The Graveyard Book—and many of his other novels and comic books also feature witches. He also takes on religious themes, stories, and figures in several of his other novels, most notably in American Gods and Norse Mythology. As a work of religious satire, Good Omens shares similarities with works as varied as C.S. Lewis’s The Screwtape Letters and Dante’s Divine Comedy—and in the way Good Omens also parodies the modern world, it’s also possible to draw similarities between it and novels like Alice’s Adventures in Wonderland. In both Alice’s Adventures in Wonderland and Alice Through the Looking-Glass, Lewis Carroll satirizes the Victorian society in which he lived. Gaiman also wrote what would become Good Omens’s opening after collaborating on Don’t Panic: The Official Hitchhiker’s Guide to the Galaxy Companion. Douglas Adams’s The Hitchhiker’s Guide to the Galaxy and subsequent works in the series are, like Good Omens, humorous and absurd.
Key Facts about Good Omens

Isn’t it Ironic? Upon Pratchett’s death, he left Gaiman a letter asking him to continue working on a film adaptation of Good Omens. The result, Amazon’s 2019 limited series Good Omens, starred David Tennant as Crowley, Michael Sheen as Aziraphale, and Frances McDormand as the voice of God. Gaiman was delighted when its release spawned a petition from an American religious group asking Netflix—rather than Amazon—to cancel the show, which he saw as free publicity.

Comedy of Errors. The specific Bibles in Aziraphale’s collection of misprinted Bibles may be fictional, but there are a number of Bibles, known as Bible errata, with printing errors. Some of the most famous are the Printers Bible, which reads “Printers have persecuted me without a cause” instead of “Princes have persecuted me without a cause,” and the Wicked Bible. In addition to writing that God “shewed us his [...] great-asse” instead of “his greatnesse,” the Wicked Bible also changes the Seventh Commandment from “Though shalt not commit adultery” to “Though shalt commit adultery”—and the printers were fined for the mistakes. 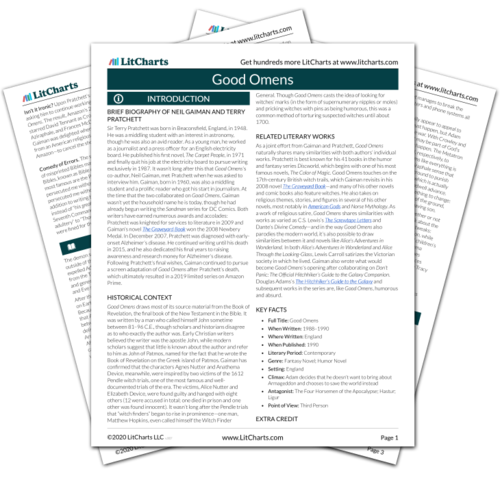 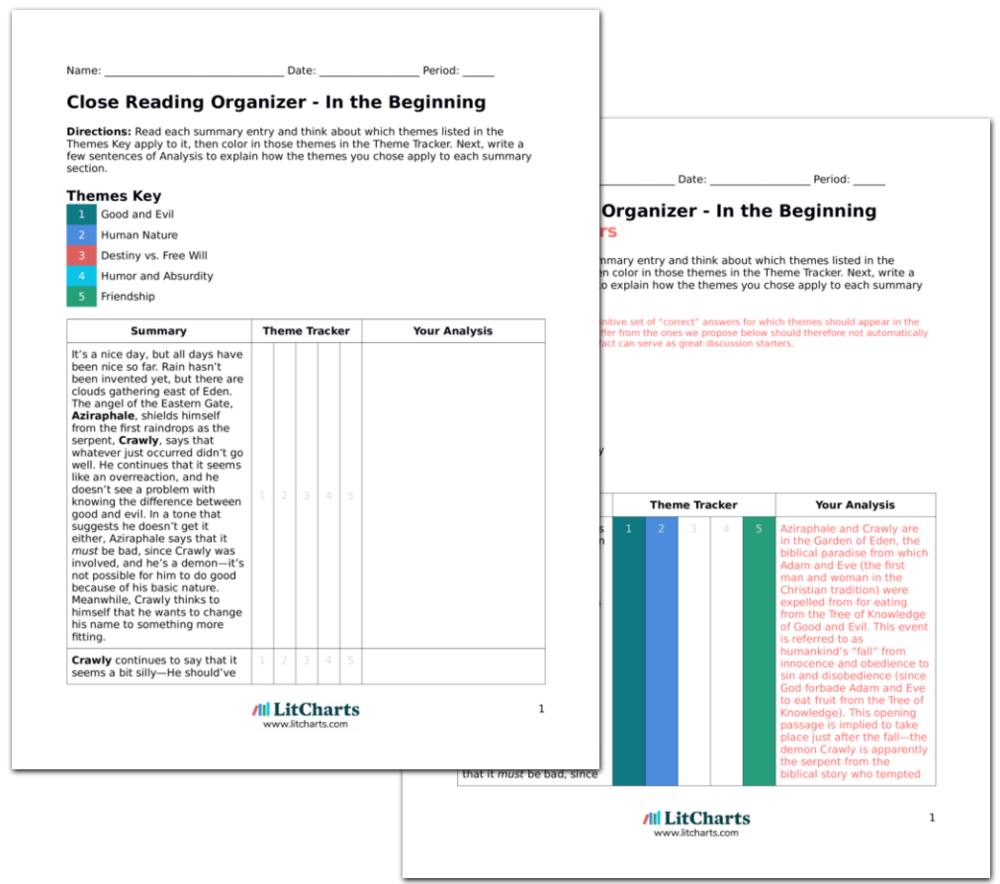