Download this LitChart! (PDF)
Teachers and parents! Struggling with distance learning? Our Teacher Edition on The Shining can help.

Welcome to the LitCharts study guide on Stephen King's The Shining. Created by the original team behind SparkNotes, LitCharts are the world's best literature guides.

A concise biography of Stephen King plus historical and literary context for The Shining.

A quick-reference summary: The Shining on a single page.

In-depth summary and analysis of every chapter of The Shining. Visual theme-tracking, too.

Explanations, analysis, and visualizations of The Shining's themes.

The Shining's important quotes, sortable by theme, character, or chapter.

Description, analysis, and timelines for The Shining's characters.

Explanations of The Shining's symbols, and tracking of where they appear.

An interactive data visualization of The Shining's plot and themes.

Stephen King was born the second son of Nellie Ruth Pillsbury and Donald Edwin King, a merchant seaman, in Portland, Maine, in 1947. His father left when he was just a toddler, and his mother raised King and his brother alone. They moved several times, including to Wisconsin and Indiana, before finally returning to Maine, where King’s mother worked as a caregiver, first for her parents, then at a home for the mentally ill. King attended Lisbon Falls High School in Lisbon Falls, Maine, where he began writing. He sold his first story in 1965 to an unofficial magazine and graduated from high school in 1966. He immediately enrolled at the University of Maine in Orono, Maine, where he met his future wife, Tabitha. In 1970, the same year King’s daughter was born, he graduated with a Bachelor of Arts in English and later married Tabitha in 1971. He began work as a teacher at a public school and continued to write, publishing Carrie in 1973. The novel was wildly popular and cemented King as a major horror writer. The success of Carrie was followed by Salem’s Lot in 1975 and The Shining in 1977, which King wrote while briefly living in Boulder, Colorado. Over the years, King and his wife welcomed two sons, and King continued to write, under his own name and the pseudonym Richard Bachman. Since the 1970s, King has been a mainstay of contemporary horror and is the author of 61 novels, 200 short stories, and six nonfiction books. Several of his novels and short stories have been made into awarding-winning films, such as The Green Mile, The Shawshank Redemption, Misery, and It. King is the recipient of numerous awards and accolades since the 1970s, most notably the Medal for Distinguished Contribution to American Letters from the National Book Foundation in 2003 and the National Medal of Arts from the National Endowment for the Arts in 2015. King lives with his wife, who is also a novelist, in Maine, where he is particularly appreciated for his philanthropic contributions to the community.
Get the entire The Shining LitChart as a printable PDF.
"My students can't get enough of your charts and their results have gone through the roof." -Graham S.
Download 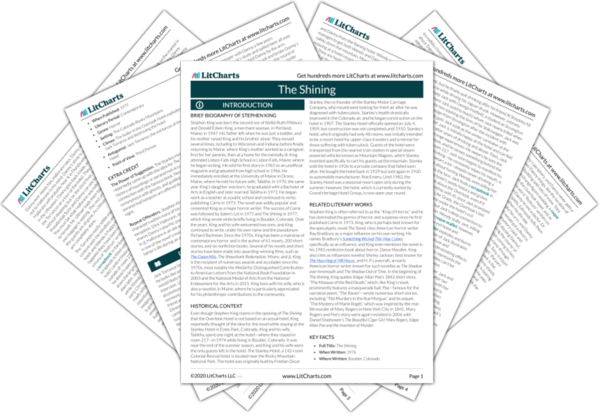 Historical Context of The Shining

Even though Stephen King claims in the opening of The Shining that the Overlook Hotel is not based on an actual hotel, King reportedly thought of the idea for the novel while staying at the Stanley Hotel in Estes Park, Colorado. King and his wife, Tabitha, spent one night at the hotel—where they stayed in room 217—in 1974 while living in Boulder, Colorado. It was near the end of the summer season, and King and his wife were the only guests left in the hotel. The Stanley Hotel, a 142-room Colonial Revival hotel, is located near the Rocky Mountain National Park. The hotel was originally built by Freelan Oscar Stanley, the co-founder of the Stanley Motor Carriage Company, who moved west looking for fresh air after he was diagnosed with tuberculosis. Stanley’s health drastically improved in the Colorado air, and he began construction on the hotel in 1907. The Stanley Hotel officially opened on July 4, 1909, but construction was not completed until 1910. Stanley’s hotel, which originally had only 48 rooms, was initially intended to be a resort hotel for upper-class travelers and a retreat for those suffering with tuberculosis. Guests of the hotel were transported from the nearest train station in special steam-powered vehicles known as Mountain Wagons, which Stanley invented specifically to cart his guests up the mountain. Stanley sold the hotel in 1926 to a private company that failed soon after. He bought the hotel back in 1929 but sold again in 1930 to automobile manufacturer, Roe Emery. Until 1983, the Stanley Hotel was a seasonal resort open only during the summer; however, the hotel, which is currently owned by Grand Heritage Hotel Group, is now open year round.

Other Books Related to The Shining

Stephen King is often referred to as the “King of Horror,” and he has dominated the genres of horror and suspense since he first published Carrie in 1973. King, who is perhaps best known for the apocalyptic novel The Stand, cites American horror writer Ray Bradbury as a major influence on his own writing. He names Bradbury’s Something Wicked This Way Comes specifically as an influence, and King even mentions the novel in his 1981 nonfiction book about horror, Danse Macabre. King also cites as influences novelist Shirley Jackson, best known for The Haunting of Hill House, and H. P. Lovecraft, an early American horror writer known for such novellas as The Shadow over Innsmouth and The Shadow Out of Time. In the beginning of The Shining, King quotes Edgar Allan Poe’s 1842 short story, “The Masque of the Red Death,” which, like King’s novel, prominently features a masquerade ball. Poe—famous for the narrative poem, “The Raven”—wrote numerous short stories, including “The Murders in the Rue Morgue,” and its sequel, “The Mystery of Marie Rogêt,” which was inspired by the real-life murder of Mary Rogers in New York City in 1841. Mary Rogers and Poe’s story were again revisited in 2006 with Daniel Stashower’s The Beautiful Cigar Girl: Mary Rogers, Edgar Allan Poe and the Invention of Murder.
Key Facts about The Shining

Extra Credit for The Shining

The Power of Suggestion. The Stanley Hotel—where King reportedly came up with the idea for The Shining—had no history of hauntings or paranormal occurrences until after its connection with the famous book. Now, the Stanley Hotel is synonymous with ghosts, and guided tours of the hotel’s paranormal hotspots are offered during both the day and night.

Repeat Offenders. Stephen King is known for repeating characters within many of his books, and The Shining is no exception. Dick Hallorann, the cook at the Overlook Hotel who shares Danny’s psychic powers, also appears in King’s novel, It. In It, Hallorann is an old army friend of Mike Hanlon’s dad. Mike is one of the novel’s main characters, and Hallorann saves his father’s life during an arson attack by white supremacists. 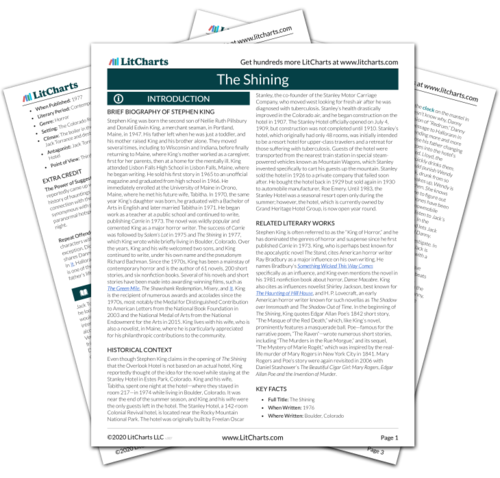 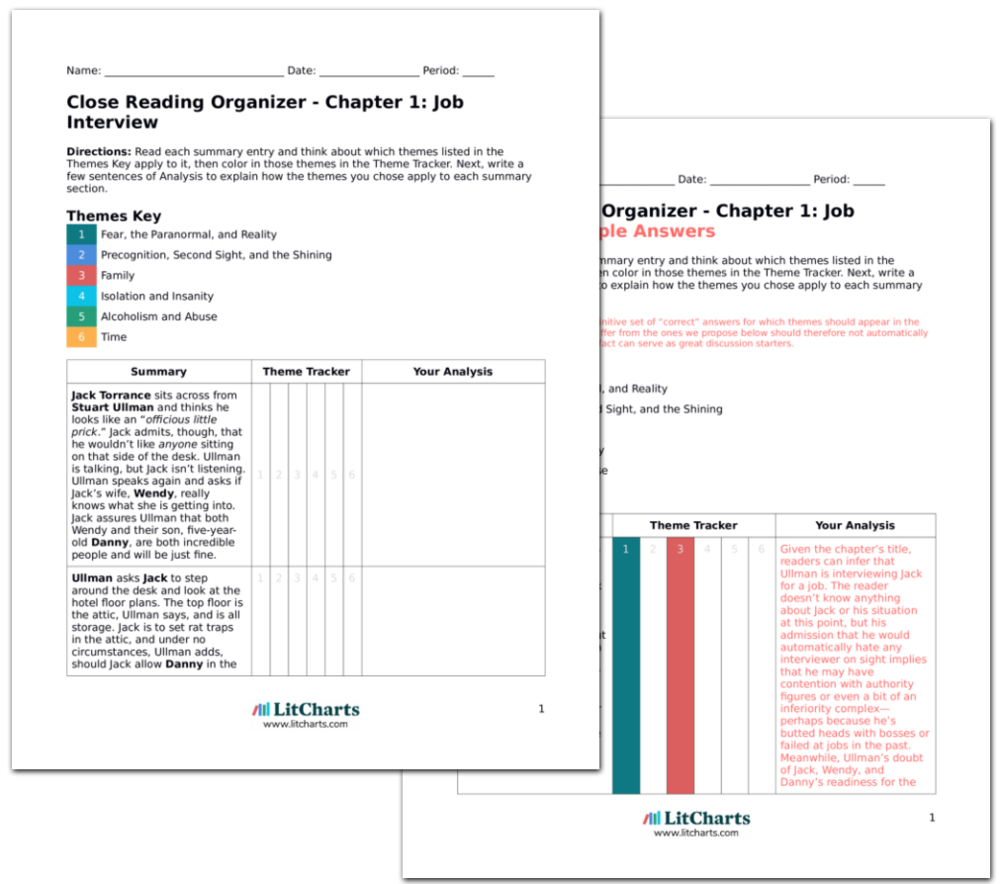