Get LitCharts A+
LitCharts assigns a color and icon to each theme in The Tenant of Wildfell Hall, which you can use to track the themes throughout the work.

Helen Graham is a devout Christian, and strives to live her life according to Biblical principles. Her marriage to Arthur Huntingdon tests both her faith and her resolve to be good in the face of evil. Even as Arthur mocks her piety, and her own unhappiness suggests to her that the institution of marriage might at times prove a prison, she remains true to the Christian tenets of charity and forgiveness, and in the end she is rewarded for her sacrifices. Overall this delivers a relatively straightforward “moral” to Brontë’s story: her claim that holding to one’s Christian faith and virtues even in the face of difficulties and unfairness will ultimately lead to happiness—if not in this life, then at least in the next.

Christianity buoys Helen and gives her strength in her most desperate moments. For instance, when she discovers that Arthur and Annabella are indeed lovers, she finds consolation in contemplating the heavens. As her marriage to Arthur grows increasingly unbearable, Helen takes comfort in the fact that she is acting like a Christian should and providing her son with a positive role model of how to live in the world. Her belief in God and scripture likewise gives her the fortitude to leave Arthur and begin a new life, and it also supports her while she returns to nurse Arthur on his death bed. Arthur Huntingdon does not have this refuge. He begins their marriage wishing Helen weren’t so pious, and ends it begging her to save him with the power of her belief. His death is particularly tragic because he built his life around the pursuit of worldly pleasures, and dies filled with regret that he gave no thought to the salvation of his soul.

Helen’s steadfast Christian virtue saves her from forming what would have been a disastrous, not to mention adulterous, attachment to Walter Hargrave. Desperately in love with her, Walter attempts to convince Helen to begin a sexual relationship with him when it becomes clear that Arthur and Annabella are themselves engaged in an affair, but Helen refuses him, partially on the grounds that it would be morally wrong to be unfaithful to her husband. Walter does not understand her logic. Given that Arthur is being unfaithful to Helen, it is Walter’s opinion that she would be fully justified in surrendering to her own passions. Helen refuses Walter, and is vindicated later when he, having married an older woman for money, shows his true colors as an abusive and selfish husband.

Helen’s strict morals also pave the way for her to find true love with Gilbert Markham. Like Walter, Gilbert had hoped that he and Helen might indulge their feelings for each other while Helen is married, but Helen informs Gilbert that as long as Arthur lives she is a married woman, and therefore the two of them can only hope to meet later in Heaven as soulmates. When Arthur dies, however, Helen and Gilbert are finally free to marry, and they can do so in good conscience, free from any guilt or blame that would have resulted had they permitted themselves to form a romantic attachment while Helen was still committed to Arthur.

Religion plays a sometimes-contradictory role in Helen’s pursuit of happiness and fulfillment. On one hand, Christianity provides Helen with the strength she needs to persevere during the difficult years of her marriage to Arthur. On the other hand, her Christianity traps her in that marriage by prohibiting divorce. Later, Christian doctrine gives villagers like the Reverend Michael Millward and Mrs. Markham license to judge Helen unfairly. Brontë does not at any point directly criticize the institution of marriage, but the time Helen spends as the victim of Arthur’s cruelty is nevertheless portrayed as a wasted span of years. Although she has a son whom she loves, most of her time as a married woman is spent suffering and hoping Arthur will change. Moreover, had it not been for Christianity’s rigid rules concerning marriage and fidelity, she might have divorced her husband when he first began mistreating her. Divorce is not an option for Helen because of her faith (and society which is arranged around that faith), and so she is a prisoner of her decision. Helen’s Christianity also leads her to spends several months nursing Arthur, an effort that ends only in more time lost trying to save a man who doesn’t want to be saved.

Yet Brontë makes a clear distinction between Helen’s virtuous faith and the hypocritical doctrines practiced and preached by the Reverend Michael Millward. Millward’s word is law in his parish, and this means that church-goers such as Mrs. Markham do not think to question even his most ill-conceived opinions. Millward is arrogant and at times willfully ignorant, and he therefore represents the worst of organized religion. It is Millward’s misguided condemnation of Helen’s lifestyle that leads many in the village to judge Helen before they get to know her. That spirit of judgment in turn leads his daughter Eliza and her friend Jane Wilson to spread false rumors about Helen and the father of her child, causing both Helen and Gilbert unneeded torment.

Religion, for the most part, serves as a positive force in Helen’s life. It gives her the strength to withstand Arthur’s abuse and the resolve she needs to leave him and live independently at Wildfell Hall. It also clears the way to true love with Gilbert. At the same time, Christianity is shown to make unreasonable demands of Helen, trapping her in a dead-end marriage and stripping her of the freedom to escape the consequences of bad choices. Furthermore, corrupt church officials and their flawed interpretations of scripture are shown to lead not only to warped understandings of the message of Christianity, but to systemic intolerance and a kind of petty tyranny that flies in the face of Christ’s teachings. 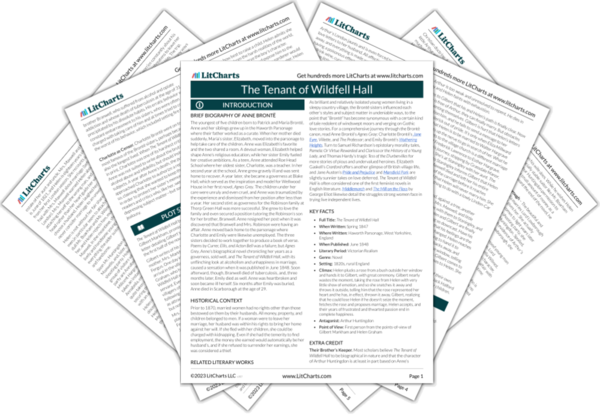 Christian Faith and Morality Quotes in The Tenant of Wildfell Hall

Below you will find the important quotes in The Tenant of Wildfell Hall related to the theme of Christian Faith and Morality.
Chapter 10 Quotes

You see what it is for women to affect to be different to other people.

I have such confidence in him, aunt, notwithstanding all you say, that I would willingly risk my happiness for the chance of securing his. I will leave better men to those who only consider their own advantage. If he has done amiss, I shall consider my life well spent in saving him from the consequences of his early errors, and striving to recall him to the path of virtue—God grant me success!

I cannot get him to write or speak in real, solid earnest. I don't much mind it now; but if it be always so, what shall I do with the serious part of myself?

She is a daughter of earth; you are an angel of heaven; only be not too austere in your divinity, and remember that I am a poor, fallible mortal.

“A man must have something to grumble about; and if he can't complain that his wife harries him to death with her perversity and ill-humour, he must complain that she wears him out with her kindness and gentleness.”

“But why complain at all, unless, because you are tired and dissatisfied?”

“To excuse my own failings, to be sure. Do you think I'll bear all the burden of my sins on my own shoulders, as long as there's another ready to help me, with none of her own to carry?”

“I do not insult you,” cried he: “I worship you. You are my angel—my divinity! I lay my powers at your feet—and you must and shall accept them!” he exclaimed impetuously, starting to his feet—"I will be your consoler and defender! And if your conscience upbraid you for it, say I overcame you and you could not choose but yield!” 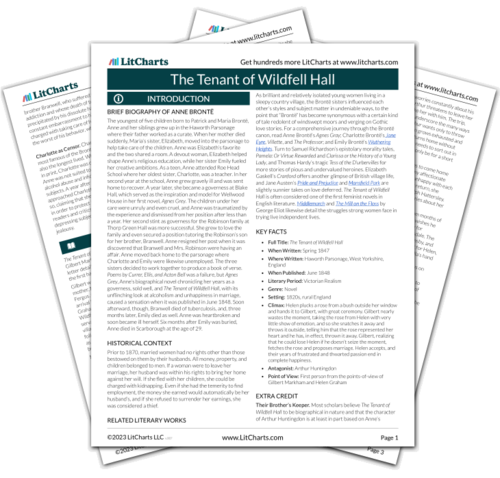 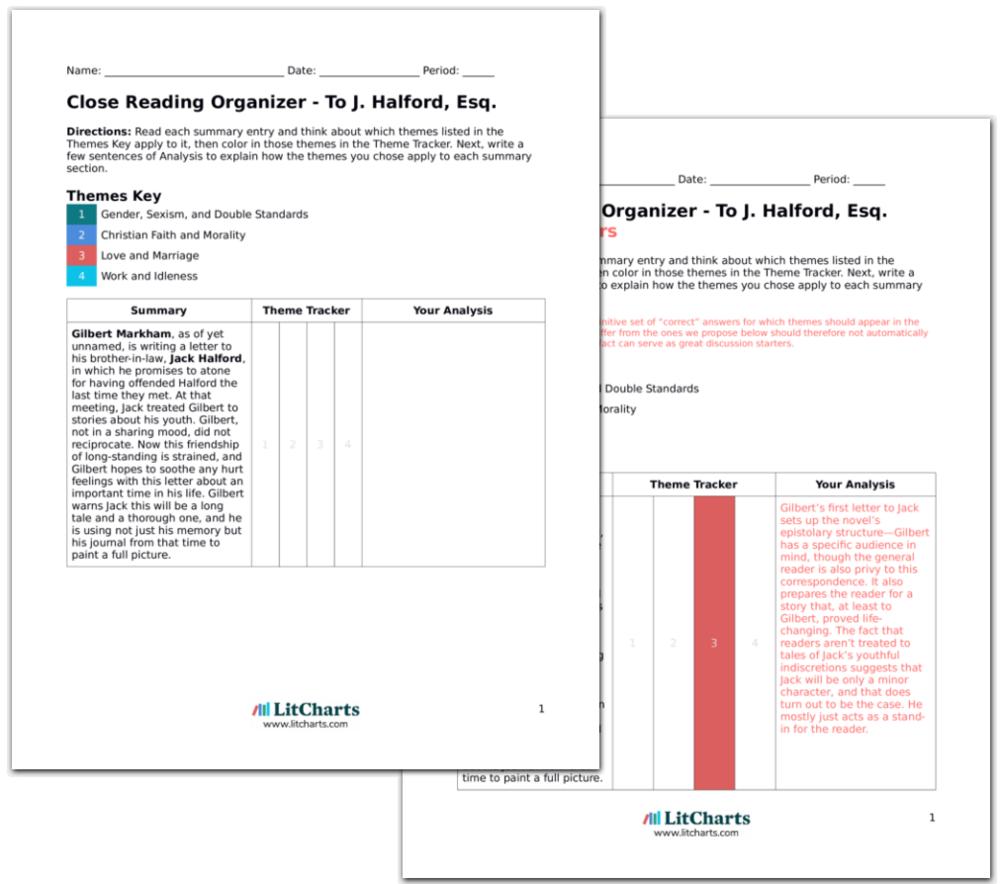