It is the early 1900s in colonial India. Aziz, a young Muslim doctor in the town of Chandrapore, discusses with his friends whether it is possible for an Englishman and an Indian to be friends. Aziz finds the English amusing but often condescending and rude.

Meanwhile Adela Quested and the elderly Mrs. Moore arrive from England. Adela plans to marry Ronny Heaslop, Mrs. Moore’s son and an official in Chandrapore. The two women arrive at the English-only club and express a desire to see the “real” India. That night Mrs. Moore and Aziz meet in a local mosque and feel an instant connection.

Mr. Turton, the English collector, hosts a party at the club and invites some Indians to meet Mrs. Moore and Adela. Cyril Fielding, the principal of the government college, is impressed by Adela’s friendliness to the Indians, and he invites her and Mrs. Moore to tea. Adela requests that Aziz be invited as well.

Aziz and Fielding meet before the tea party and get along very well. The Hindu Professor Godbole, Adela, and Mrs. Moore join them. The party goes well until Ronny arrives and is rude to the Indians. That evening Adela thinks more about her feelings and decides not to marry Ronny. The two break up amicably. Later their car crashes into a mysterious animal, and during the incident Adela changes her mind.

Aziz arranges a day trip to the Marabar Caves for Fielding’s tea party group. Fielding and Professor Godbole miss the train, so Aziz goes on alone with Adela and Mrs. Moore. They ride an elephant, have a picnic, and visit some of the caves, which are ancient and seemingly unfriendly. Mrs. Moore is smothered by people and disturbed by the caves’ echo, which reduces every noise to “boum.” Depressed, she stays behind while Aziz, Adela, and a guide go to visit more caves.

As they walk Adela realizes that she doesn’t love Ronny. She discusses marriage with Aziz, and asks if he has more than one wife. He is offended and ducks into a nearby cave to recover. When he emerges, Adela is gone. He finds Adela’s broken field-glasses and then sees her at the bottom of the hill. Aziz heads back down to the picnic site, where Fielding has arrived. Adela has hurried back to Chandrapore by car. The others take the train back, but when they arrive Aziz is arrested and charged with assaulting Adela in a cave.

The English draw together, feeling patriotic and anti-Indian. Fielding believes Aziz to be innocent, and he angers the English by joining Aziz’s defense. Mrs. Moore continues to be haunted by the cave’s echo, and she grows irritable and apathetic. Adela also hears the echo. Ronny is angered by Mrs. Moore’s attitude, and he arranges for her to return to England early. Mrs. Moore dies on the journey.

Aziz’s trial is tense and chaotic. When Adela is questioned, she declares that she was mistaken—Aziz did not attack her in the cave. Aziz is released, the Indians celebrate wildly, and Fielding escorts Adela to the college. Adela stays there for weeks, and Fielding comes to respect her bravery. Ronny breaks off the engagement, and Adela returns to England.

Aziz feels betrayed, and his friendship with Fielding cools. Fielding sails to England, and Aziz suspects that he will marry Adela there.

Two years later, Aziz lives in Mau, a Hindu area. He has grown more anti-British and patriotic about a united and independent India. He assumes that Fielding married Adela. Fielding visits Mau with his wife and brother-in-law. Aziz encounters them and is surprised to learn that Fielding actually married Stella Moore, Mrs. Moore’s daughter. Meanwhile an important Hindu festival takes place in town.

Aziz finds himself drawn to Stella’s brother (Fielding’s brother-in-law), Ralph Moore, and takes him on the lake to see the festival. Aziz’s boat crashes into Fielding’s at the height of the ceremonies, and after the incident Aziz and Fielding are reconciled. The two men go for a final ride together. Aziz declares that once the English leave India then he and Fielding can be friends. They want to be friends now, but the sky and earth seem to separate them and say “Not yet.” 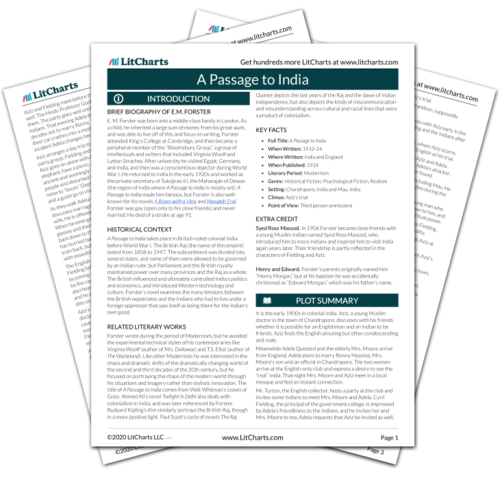 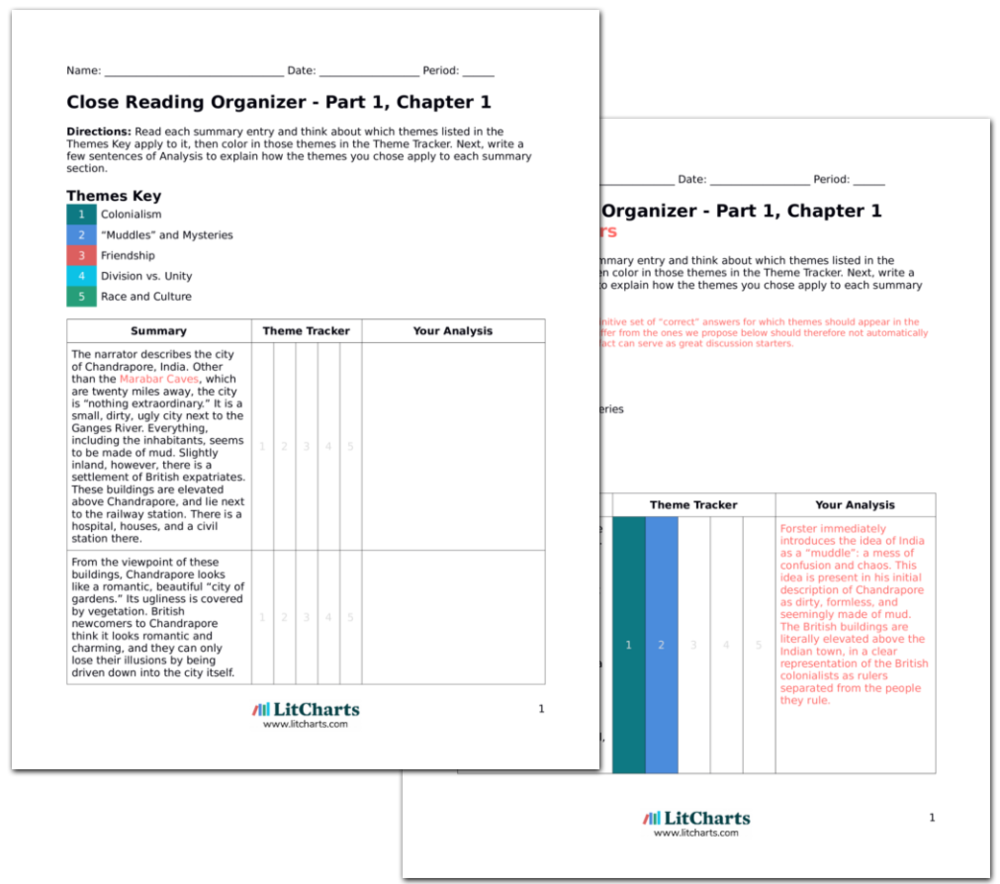