Sixteen-year-old Cinder is a cyborg mechanic living in the futuristic city of New Beijing in the country of the Eastern Commonwealth. One day, at her mechanic’s booth, Cinder struggles to remove her old, rusty mechanical foot and then fits herself with the new prosthetic she just purchased. Just after this, the prince of the Eastern Commonwealth, Prince Kai, visits her booth and asks her to fix his android Nainsi, explaining that Cinder has a reputation as the best mechanic in New Beijing. As a cyborg, Cinder faces discrimination from people who believe she is less than human, so she keeps her identity hidden from Kai. After he leaves, an outbreak of the deadly plague letumosis spreads through the market, and the baker, Chang Sacha, is taken to the quarantines.

When Cinder gets home from the market, her stepmother Adri is getting dresses fitted for Cinder’s stepsisters Pearl and Peony for the upcoming ball, but Adri says that she can’t afford both a dress for Cinder and new a magbelt for their hover. Cinder decides to go with Peony and Iko, her android, to a junkyard to scavenge for a magbelt. There, Cinder finds a magbelt as well as an old gasoline car. Suddenly, Peony’s skin begins to break out in splotches—she’s caught letumosis. Med-droids soon arrive and take Peony to the quarantines, but Cinder tests negative for the disease.

When Cinder returns to the apartment, Adri is furious with Cinder for putting Peony in danger, so she volunteers Cinder for cyborg letumosis research—she’ll be paid for Cinder’s contribution to the research. Cinder protests, knowing that no one survives the testing, but the med-droids knock her unconscious and take her away.

Meanwhile, Prince Kai’s father, Emperor Rikan, also has letumosis and will likely die soon. Rikan’s advisor, Konn Torin, suggests that he and Kai come up with a plan for the peace negotiations with Queen Levana (the ruler of Luna, the colony on the moon). Lunars are notorious for being greedy and power-hungry because they have the “gift,” meaning that they can telepathically manipulate people’s thoughts and actions. While Levana wants to marry Kai to form an alliance, Kai is hesitant to do so. Kai is also trying to find Princess Selene, Queen Levana’s niece and the true heir to the throne. Most believe that Princess Selene died in a fire when she was young, but there are rumors that she survived and fled Luna. Kai hopes that if she has spent most of her life on Earth, she’ll be more sympathetic to them than Levana is.

In the letumosis research lab, the head of research, Dr. Erland, discovers that Cinder is immune to letumosis, and he runs further tests on her blood samples over the coming days. When Cinder returns home, she decides to fix up the gasoline car she found and leave the Eastern Commonwealth as soon as she can.

The next day, Emperor Rikan dies. Queen Levana offers her condolences to Kai and insists on visiting Earth. Before the news breaks to the public, Cinder gets up early to visit Peony in the quarantines. She assures Peony that she’ll do everything she can to save her life. Cinder then visits the palace’s research center and runs into Kai once more. He asks her if she would accompany him to the ball as his personal guest, but Cinder refuses, as that is the night she is planning to run away, and she knows that he probably wouldn’t want to associate with her if he knew she was a cyborg.

Back at the lab, Dr. Erland reveals to Cinder she is a Lunar fugitive—that is why she is immune to the disease. Second, because Queen Levana is visiting, Cinder cannot allow Levana to see her. Cinder is a shell—she is resistant to the Lunar “gift”—and Queen Levana hates shells and would likely try to kill her.

The next day, Queen Levana arrives from Luna for peace negotiations. Meanwhile, Cinder starts to fix Nainsi and discovers an errant chip in Nainsi’s wiring. When Cinder plugs the chip into her own communication device, it isn’t able to link up with anything. Cinder returns to the palace with Nainsi and sees a crowd outside, protesting the Lunar queen’s arrival. When Levana appears on a balcony above the protestors, she immediately brainwashes and quiets the crowd. Cinder is also almost brainwashed, but is able to resist this manipulation. Levana spots her and looks at her with disdain.

During talks with Kai, Queen Levana tells him that her research team has discovered a cure for letumosis and that she has brought one dose of it—but to make more, she needs to be compensated. Kai is disgusted that she is using a deadly disease as a political bargaining chip.

After this confrontation, Cinder returns Nainsi to Kai, and they both go visit Dr. Erland together. Kai gives Dr. Erland the antidote and asks if he can replicate it. After Kai leaves, Cinder accuses Dr. Erland of lying to her about being a shell, because she was just as susceptible to Levana’s gift as the others. Dr. Erland explains that he’s been doing research on her family. Her adopted father, Garan, designed a biological security system that prevents outside manipulation by Lunars, which protected Cinder from Levana’s gift and also protected her own identity, because she couldn’t use her “gift” on others growing up. But now, it seems that Cinder’s gift is returning to her. Dr. Erland also reveals that he is Lunar, and that he fled Luna because Queen Levana killed his daughter, who was a shell.

At that moment, Cinder learns that Peony has entered the fourth stage of letumosis. Dr. Erland gives Cinder a small portion of the antidote to save Peony, but she arrives too late to save her. Instead, Cinder spots Sunto—Chang Sacha’s son—and gives him the antidote instead. When Cinder returns home from the quarantines, Adri has discovered that Cinder spent 600 univs on her new prosthetic foot. Adri then tells Cinder that she’s sold some of Cinder’s things to pay for a funeral for Peony, and she is also taking her foot away. Cinder is horrified to learn that Adri even sold Iko for parts.

On the day of the ball, Kai pays one more visit to Cinder’s booth, giving her a pair of silver silk gloves. She thanks him but insists that she’s not going to the ball. Kai tells her that he’s probably going to marry Levana and will announce it that night after his coronation. At home, Cinder watches Kai’s coronation: he gives a speech insisting that he’ll always prioritize the citizens of the Eastern Commonwealth. At that moment, Cinder receives communication via the chip that was implanted in Nainsi—a Lunar girl informs Cinder that Queen Levana is planning to kill Kai after they are married and have an heir. Cinder realizes that she has to go to the ball to warn Kai.

Putting on Peony’s dress, her old mechanical foot, and Kai’s gloves, Cinder drives the gasoline car to the palace. She arrives at the ball and dances with Kai as she warns him that Levana is going to kill him. Hearing this, Kai insists that he still has to marry Levana for the good of the people. Cinder decides that the only way to stop him is to make Levana so angry that she won’t want to marry Kai, and so Cinder kisses Kai.

After they kiss, Queen Levana confronts Cinder, declaring that Cinder is a Lunar fugitive and must be taken into custody. Kai tries to protest, but Cinder tells him that it’s true, and a guard grabs Cinder. Queen Levana tells Kai that Cinder can go free if he marries the queen, but as Cinder protests, Kai refuses to marry her. Queen Levana then controls Cinder, forcing her to take the gun from the guard and point it at her own head. But before Cinder can pull the trigger, her cyborg interface overrides her body, and she drops the gun. She tries to run—but her small mechanical foot severs from her calf, and she falls down the stairs. Kai runs after her, but he now knows that she’s a Lunar and sees from her missing foot that she is a cyborg. He seems disgusted by her and wonders if all of their interactions were a Lunar “illusion.” Levana demands that Cinder be returned to Luna, and Kai agrees.

In the book’s final chapters, Cinder sits in a prison, waiting to be taken to Luna. Dr. Erland uses his gift on the guards to break in and give her a new hand and foot. He tells her to escape the prison and meet him in Africa before giving her a final revelation: she is Princess Selene, Queen Levana’s niece. Cinder realizes that the only way to stop the inevitable war and protect Kai is for her to retake the Lunar throne from Levana. 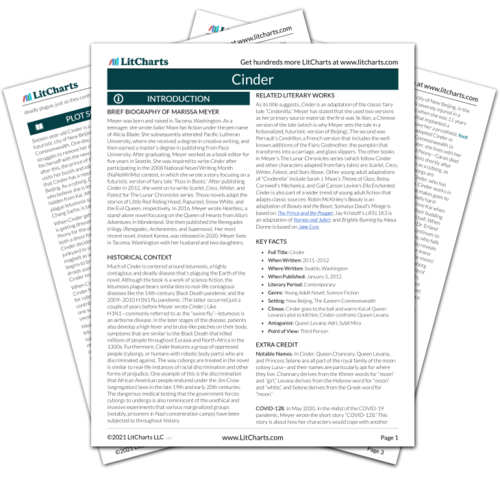 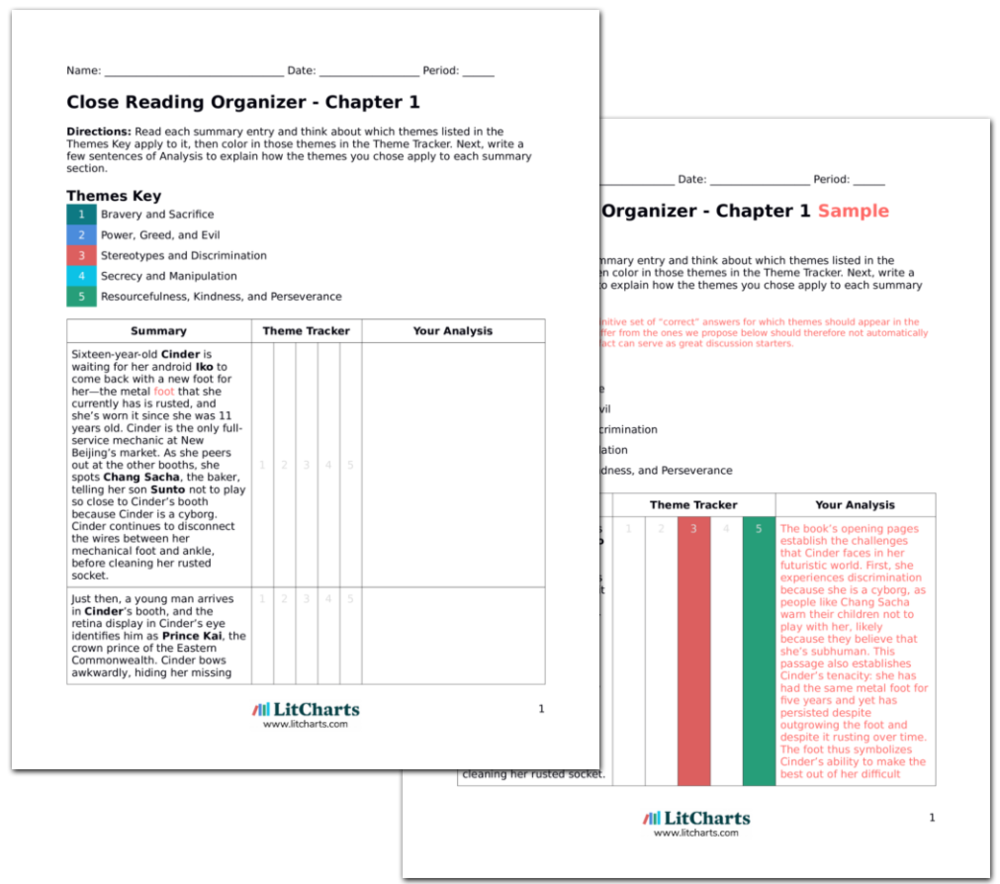