Welcome to the LitCharts study guide on Ron Hall and Denver Moore's Same Kind of Different as Me. Created by the original team behind SparkNotes, LitCharts are the world's best literature guides.

Same Kind of Different as Me: Introduction

A concise biography of Ron Hall and Denver Moore plus historical and literary context for Same Kind of Different as Me.

Same Kind of Different as Me: Plot Summary

A quick-reference summary: Same Kind of Different as Me on a single page.

Same Kind of Different as Me: Detailed Summary & Analysis

In-depth summary and analysis of every chapter of Same Kind of Different as Me. Visual theme-tracking, too.

Same Kind of Different as Me: Themes

Explanations, analysis, and visualizations of Same Kind of Different as Me's themes.

Same Kind of Different as Me: Quotes

Same Kind of Different as Me: Characters

Description, analysis, and timelines for Same Kind of Different as Me's characters.

Same Kind of Different as Me: Symbols

Explanations of Same Kind of Different as Me's symbols, and tracking of where they appear.

Same Kind of Different as Me: Theme Wheel

An interactive data visualization of Same Kind of Different as Me's plot and themes.

Ron Hall grew up in Fort Worth, Texas, in a lower-middle-class family and spent his summers working on his grandfather’s cotton farm. He attended college at Texas Christian University, where he met his soon-to-be wife, Deborah. Although Hall started in investment banking, he developed a lucrative career for himself as an art dealer. While volunteering at the Union Gospel Mission, a homeless shelter in Fort Worth, Ron met a homeless man named Denver Moore, and the two men formed an unlikely friendship. Denver Moore was born in rural Louisiana, where he spent the first 30 years of his life. He began sharecropping on a cotton plantation—where he was held in debt-bondage and never paid a wage—at a young age, and thus never received an education or learned how to read, write, or do arithmetic. After spending several years living on the streets in Texas, followed by ten dark years in Angola prison in Louisiana, Moore returned to Fort Worth, where he formed a lasting friendship with Ron and Deborah Hall. After Deborah fell ill with cancer and died some years later, Hall invited Moore to live and work with him, which Moore did until his death in 2012. Together, they co-authored several books, assisted in the homeless shelter’s development, went on speaking tours, and continued to sell art. Hall also helped develop the screenplay for the film adaptation of Same Kind of Different as Me. Hall has two children and remarried in 2011. Moore is survived by two sons and two daughters. Both Moore and Hall had help in writing their novel from Lynn Vincent. After serving in the US Navy during Operations Desert Shield and Desert Storm, Vincent worked as journalist, spending eleven years at Christian news publication World Magazine, where she was a senior writer and features editor, and to which she still contributes. She has more than 1,000 articles to her name. After her time with World, Vincent authored and co-authored a number of New York Times nonfiction best sellers, including Same Kind of Different as Me, Indianapolis, and Sarah Palin’s memoir, Going Rogue. Vincent continues to write, speak, and work as a writing instructor. She has two sons and lives with her husband in San Diego, California.
Get the entire Same Kind of Different as Me LitChart as a printable PDF.
"My students can't get enough of your charts and their results have gone through the roof." -Graham S.
Download 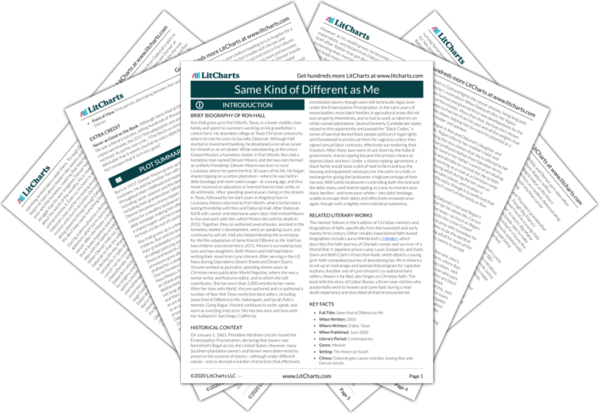 Historical Context of Same Kind of Different as Me

On January 1, 1863, President Abraham Lincoln issued the Emancipation Proclamation, declaring that slavery was henceforth illegal across the United States. However, many Southern plantation owners and farmer were determined to preserve the systems of slavery—although under different names—and so devised a number of practices that effectively constituted slavery though were still technically legal, even under the Emancipation Proclamation. In the early years of emancipation, most black families in agricultural areas did not own property themselves, and so had to work as laborers on white-owned plantations. Several formerly Confederate states seized on this opportunity and passed the “Black Codes,” a series of law that denied black people political or legal rights and threatened to prosecute them for vagrancy unless they signed annual labor contracts, effectively surrendering their freedom. After these laws were struck down by the federal government, sharecropping became the primary means to oppress black workers. Under a sharecropping agreement, a black family would lease a plot of land to farm and buy the housing and equipment necessary for the work on credit, in exchange for giving the landowner a high percentage of their harvest. With white landowners controlling both the land and the debt, many used sharecropping as a way to ensnare poor black families—and even poor whites—into debt-bondage, unable to escape their debts and effectively enslaved once again, though with a slightly more individual autonomy.

Other Books Related to Same Kind of Different as Me

The memoir follows in the tradition of Christian memoirs and biographies of faith, specifically from the twentieth and early twenty-first century. Other notably inspirational faith-based biographies include Laura Hillenbrand’s Unbroken, which describes the faith journey of Olympic runner and survivor of a World War II Japanese prison camp, Louis Zamperini, and Katie Davis and Beth Clark’s Kisses from Katie, which depicts a young girls’ faith-compelled journey of abandoning her life in America to set up an orphanage and sponsorship program for Ugandan orphans. Another one of Lynn Vincent’s co-authored best sellers, Heaven is for Real, also hinges on Christian faith. The book tells the story of Colton Burpo, a three-year-old boy who purportedly went to heaven and came back during a near-death experience and described all that he encountered.
Key Facts about Same Kind of Different as Me

Extra Credit for Same Kind of Different as Me

Never as Good as the Book. Although Same Kind of Different as Me was a literary success, selling hundreds of thousands of copies worldwide, the 2017 film adaptation was poorly received. As put by one critic, “[The film]'s so sincere and admirable that it seems churlish to voice objections, but the fact remains that it isn't very good.”