The hikers symbolize the manufacturing process at Alex’s industrial plant. They illustrate how dependent events and statistical fluctuations can cause compounding delays in a system, and how those delays can be mitigated using a system’s bottlenecks. As Alex hikes with his son Dave’s Boy Scout troop, he notices that the single-file line of hikers struggles to stay together. The slower kids disrupt the pace of the faster kids, hikers stop and start, and each boy is limited by the pace of all the boys in front of him. Although everyone can maintain a reasonable average of two miles per hour individually, the fact that each child is limited by the speed of every hiker in front of him causes any delays within the line of hikers to accumulate and compound. This illustrates how, every time a minor delay occurs in the manufacturing process, that delay is carried through every subsequent stage of the system. Any time lost to delays is nearly impossible to recover, because each stage in the process can only move as fast as every stage in front of it, some of which are slow and some of which are fast.

When the fast hikers are positioned in the front and the slowest hikers in the back, every hiker is able to hike at their maximum speed. Although Alex at first thinks this might work well, he realizes that the group quickly stretches so far out that, in the back, there is half a mile between him and the boy at the front. His speed at the back remains as slow as the slowest hiker, Herbie, who represents the group’s bottleneck. In terms of the manufacturing system, Alex realizes that the increasing distance between the fastest hiker and himself represents the plant’s increasing inventory, which loses them money. Meanwhile, his own slow speed, constrained by Herbie, represents the plant’s low throughput.

However, Alex realizes that by reversing the order and organizing the hikers from slowest to fastest, every hiker is able to match the speed of the hiker in front of him. Although the overall pace is slower than the fastest hikers, the group stays together, symbolizing the idea that inventory remains low when bottlenecks set the pace in manufacturing. Additionally, since there are no more starts and stops or delays as they regroup, Alex realizes that the group’s average pace is higher than it was before. This illustrates that, by organizing a system and pacing it according to its bottleneck, a manufacturing system can maintain a more consistent and overall higher output.

The Hikers Quotes in The Goal: A Process of Ongoing Improvement

The The Goal: A Process of Ongoing Improvement quotes below all refer to the symbol of The Hikers. For each quote, you can also see the other characters and themes related to it (each theme is indicated by its own dot and icon, like this one:

Get the entire The Goal LitChart as a printable PDF.
"My students can't get enough of your charts and their results have gone through the roof." -Graham S.
Download 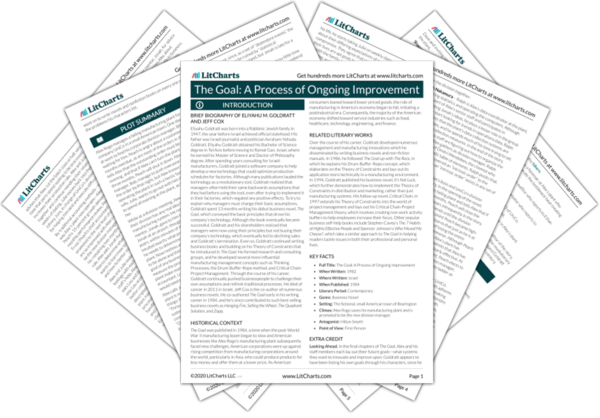 The Hikers Symbol Timeline in The Goal: A Process of Ongoing Improvement

The timeline below shows where the symbol The Hikers appears in The Goal: A Process of Ongoing Improvement. The colored dots and icons indicate which themes are associated with that appearance.

...of bed and drives with Dave to the hiking trail. When they arrive, the other hikers tell Alex that their scout leader is sick, so now Alex is the only adult... (full context)

They have about 10 miles to hike and, at an easy pace of two miles per hour, Alex estimates it should only... (full context)

...Alex’s mind, such fluctuations should average themselves out. For instance, while he’s hiking, sometimes he’ll hike faster and sometimes slower, but it should average out to two miles per hour. Looking... (full context)

...Although Alex thinks they’ve been hiking for several hours, Ron’s map shows that they’ve only hiked two miles—far less than their average speed would predict. When they start hiking again, though... (full context)

Alex realizes there are athletic limits to how fast each hiker can go, but no limits to how slow or how long they can be delayed.... (full context)

...not made as much progress as they should have. He thinks he might make the hikers more efficient by trimming their individual capacity so that they’ll each maintain the two mile... (full context)

After lunch, the hikers begin again, though Alex notices that they’ve rearranged themselves according to speed. The fastest boys... (full context)

...along the trail indicates that they still have five miles to go, meaning that the hikers have been moving an average speed of one mile per hour, rather than two. However,... (full context)

As the hikers begin again, Alex is pleased to see that they stay together as a group for... (full context)

...data processor—to be as thrilled as he was about what he figured out with the hikers. However, after hours of drawing diagrams and explaining his discovery to them in a conference... (full context)

With disappointment, Alex realizes that reorganizing the plant won’t be as easy as reorganizing hikers—neither the NCX-10 nor the heat-treating machine can simply be moved to the first stage of... (full context)

...the plant feel unsolvable. Dave is shocked to hear that what they learned on the hike didn’t easily apply to the plant. Alex’s mother tells him that he should talk to... (full context) 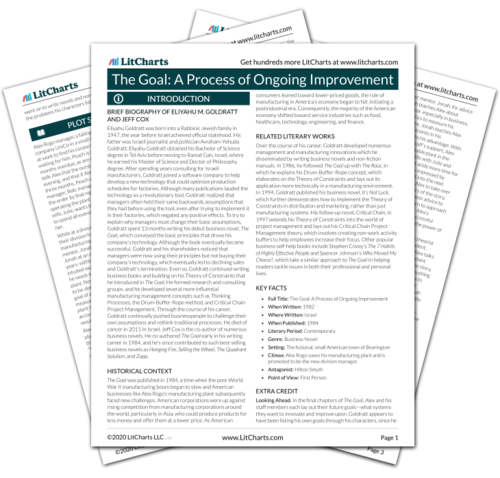 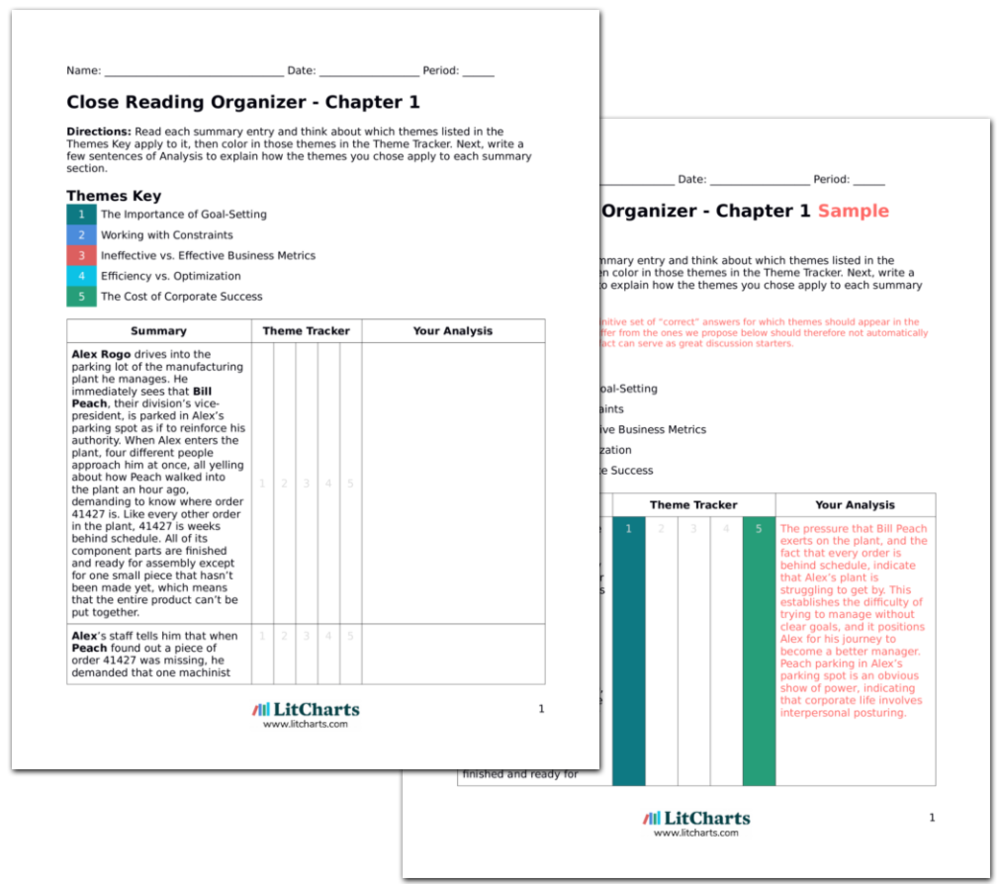