Download this LitChart! (PDF)
Teachers and parents! Struggling with distance learning? Our Teacher Edition on The Silmarillion can help.

Welcome to the LitCharts study guide on J.R.R. Tolkien's The Silmarillion. Created by the original team behind SparkNotes, LitCharts are the world's best literature guides.

A concise biography of J.R.R. Tolkien plus historical and literary context for The Silmarillion.

A quick-reference summary: The Silmarillion on a single page.

In-depth summary and analysis of every chapter of The Silmarillion. Visual theme-tracking, too.

Explanations, analysis, and visualizations of The Silmarillion's themes.

The Silmarillion's important quotes, sortable by theme, character, or chapter.

Description, analysis, and timelines for The Silmarillion's characters.

Explanations of The Silmarillion's symbols, and tracking of where they appear.

An interactive data visualization of The Silmarillion's plot and themes.

J. R. R. Tolkien was an acclaimed academic, author, and linguist. He was born in South Africa and moved to the Birmingham countryside at the age of three. By the age of four, he could read and write fluently, and he developed an interest in learning and inventing languages as he grew. In 1908, after the death of his mother, Tolkien met Edith Bratt, an older Protestant girl, whom Tolkien’s Catholic guardian later forbade him from contacting. The two reconnected when Tolkien turned 21, six months before the start of World War I, and were married in 1916 just before Tolkien left for France. While recovering from trench fever in 1917, Tolkien began writing stories that would later be adapted into The Book of Lost Tales and The Silmarillion. After the war, Tolkien found employment with the New English Dictionary, Leeds University, and finally Oxford University, where he taught for 34 years. In addition to The Hobbit and The Lord of the Rings, Tolkien published influential scholarly writings during his academic career, including his lecture “Beowulf, the Monsters and the Critics” and his treatise “On Fairy-Stories.” After his death in 1973, his son Christopher, known as the first scholar of Middle-earth, organized and published his father’s unfinished works and other stories.
Get the entire The Silmarillion LitChart as a printable PDF.
"My students can't get enough of your charts and their results have gone through the roof." -Graham S.
Download 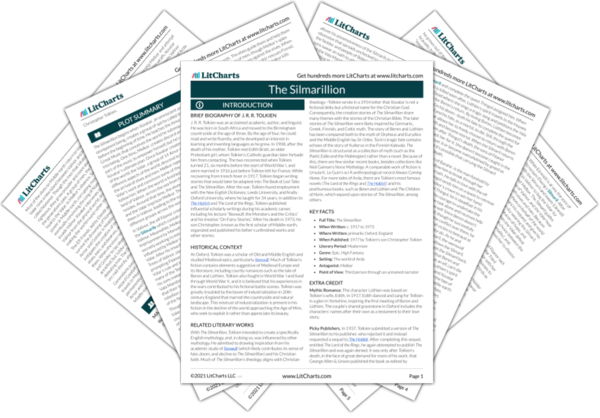 Historical Context of The Silmarillion

At Oxford, Tolkien was a scholar of Old and Middle English and studied Medieval epics, particularly Beowulf. Much of Tolkien’s fiction contains elements suggestive of Medieval Europe and its literature, including courtly romances such as the tale of Beren and Lúthien. Tolkien also fought in World War I and lived through World War II, and it is believed that his experiences in the wars contributed to his fictional battle scenes. Tolkien was greatly troubled by the boom of industrialization in 20th century England that marred the countryside and natural landscape. This mistrust of industrialization is present in his fiction in the decline of the world approaching the Age of Men, who seek to exploit it rather than appreciate its beauty.

Other Books Related to The Silmarillion

With The Silmarillion, Tolkien intended to create a specifically English mythology, and, in doing so, was influenced by other mythology. He admitted to drawing inspiration from his academic study of Beowulf (which likely contributes its sense of fate, doom, and decline to The Silmarillion) and his Christian faith. Much of The Silmarillion’s theology aligns with Christian theology—Tolkien wrote in a 1954 letter that Ilúvatar is not a fictional deity but a fictional name for the Christian God. Consequently, the creation stories of The Silmarillion share many themes with the stories of the Christian Bible. The later stories of The Silmarillion were likely inspired by Germanic, Greek, Finnish, and Celtic myth. The story of Beren and Lúthien has been compared both to the myth of Orpheus and Eurydice and the Middle English lay Sir Orfeo. Túrin’s tragic fate contains echoes of the story of Kullervo in the Finnish Kalevala. The Silmarillion is structured as a collection of myth (such as the Poetic Edda and the Mabinogion) rather than a novel. Because of this, there are few similar recent books, besides collections like Neil Gaiman’s Norse Mythology. A comparable work of fiction is Ursula K. Le Guin’s sci-fi anthropological record Always Coming Home. For more tales of Arda, there are Tolkien’s most famous novels (The Lord of the Rings and The Hobbit) and his posthumous books, such as Beren and Lúthien and The Children of Húrin, which expand upon stories of The Silmarillion, among others.
Key Facts about The Silmarillion

Extra Credit for The Silmarillion

Mythic Romance. The character Lúthien was based on Tolkien’s wife, Edith. In 1917, Edith danced and sang for Tolkien in a glen in Yorkshire, inspiring the first meeting of Beren and Lúthien. The couple’s shared gravestone in Oxford includes the characters’ names after their own as a testament to their love story.

Picky Publishers. In 1937, Tolkien submitted a version of The Silmarillion to his publisher, who rejected it and instead requested a sequel to The Hobbit. After completing this sequel, entitled The Lord of the Rings, he again attempted to publish The Silmarillion and was again denied. It was only after Tolkien’s death, in the face of great demand for more of his work, that George Allen & Unwin published the book as edited by Christopher Tolkien. 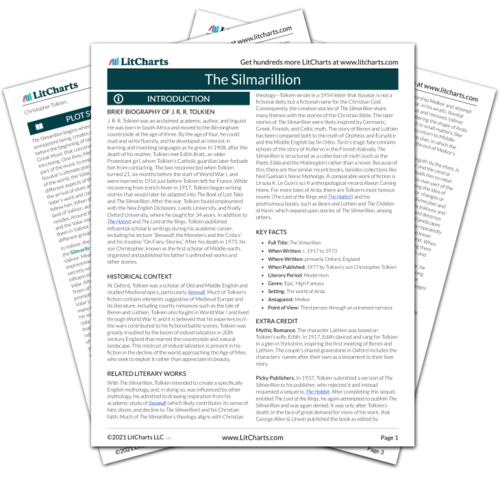 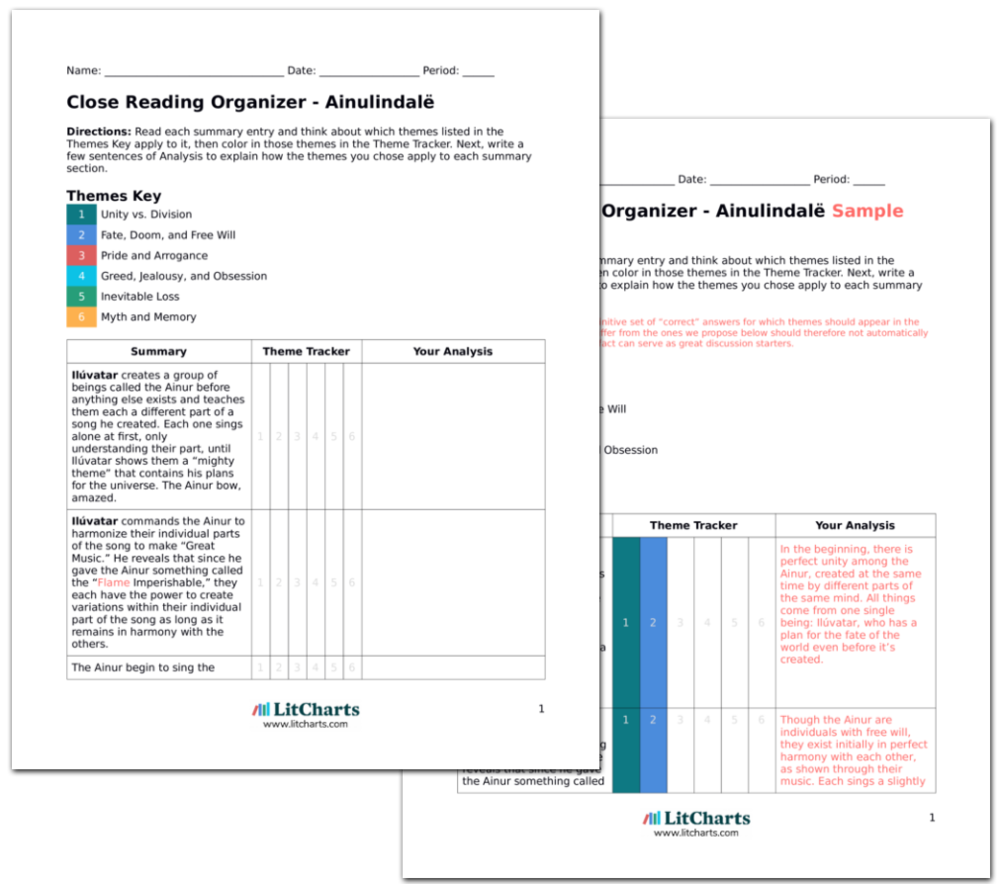