Throughout the novel, Tommy Orange uses his characters to show how storytelling and memory are indispensable parts of Native American culture and tradition. Even though the history of the Native American people is a difficult and painful one, Orange’s characters find that they cannot escape the traditions of storytelling and collective memory which allow their families and communities to survive. Throughout the novel, Orange argues that collective familial, community, and cultural memories and stories are absolutely necessary in sustaining a set of traditions under constant threat of erasure.

The characters within There There are, for the most part, lonely, poor, and in search of a way to reconcile their personal identity with their cultural heritage. For many of them, storytelling—and retreating into memory—is a way of both sustaining the past and muting the pain of the future. The most passionate storyteller among the many characters of There There is Dene Oxendene, an aspiring filmmaker who wants to carry on the project his uncle Lucas failed to finish during his lifetime by gathering the stories of the other Urban Indians who make up the Oakland Native community. Dene is desperate to collect these stories as a way of asserting his community’s resilience and rich history, and tells the people he interviews that he doesn’t care what kind of story they tell—long, short, happy, or sad—as long as it provides a window into how they experience being Native and being from (or living in) Oakland. As Dene collects stories—a couple times, even, from other characters in the novel such as Orvil Red Feather and Calvin Johnson—Orange examines the role Dene is taking on. Dene wants to give voice to others’ stories, and seeks to amass and preserve them for the good of the larger community. Dene doesn’t tell his own story on film, though—rather, towards the end of the novel, he films himself looking unblinking into his uncle’s camera, an “unflinching stare into the void of addiction and depravity.” Under the weight of all the painful stories he’s collected, Dene doesn’t have anything to say himself: his wide-eyed stare, in a way, tells the story of all the stories that have come before his own.

Stories also figure hugely in the life of Opal Viola Victoria Bear Shield. Her mother, Vicky, once told her and her sister, Jacquie Red Feather, that they “shouldn’t ever not tell [their] stories,” and throughout their lives, the sisters reckon with this directive in their own separate ways. Opal, charged with raising Jacquie’s three grandsons after Jacquie’s daughter Jamie commits suicide, doesn’t teach the boys very much at all about their Native heritage. She doesn’t tell them any stories about their people or even their family—having witnessed the pain in every branch of her family tree, and the larger struggles the Native community in Oakland faces, Opal has decided that some stories are better left untold. However, she fails to see the ways in which her stories could help guide and even prosper her grandsons, even as she finds herself retreating more and more often into the stories from her past during her long days working as a mail carrier.

Edwin Black also highlights the importance of storytelling, albeit in a slightly different way than the novel’s other characters. He begins writing short stories midway through the novel—he’s long wanted to put to paper the ideas in his head, but has been too daunted by fear of failure to do so until he begins working at the Indian Center and trying to get his life together. Edwin Black is arguably the most “educated” character in the novel, having earned a master’s degree in Native American literature. His desire to be a fiction writer differentiates him from the other characters whose go-to stories are the stories of their parents or ancestors—but Edwin, in spinning these new tales, is participating still in the tradition of making sense of the trauma, pain, and erasure Native people face by telling the stories of their lives.

On a metatextual level, Orange himself is doing the same work as Dene Oxendene (a character who could, ostensibly, be based on Orange given his half-Cheyenne heritage and impulse to turn the spotlight on others). Orange is collecting the stories which defined his youth as an Urban Indian in Oakland and educated him about the history of his people. By fictionalizing real events such as the 1969-1971 Occupation of Alcatraz, blending fiction and nonfiction in the novel’s prologue and interlude, and lending an almost magical sense of coincidence and interconnectedness to the stories he weaves throughout the novel, Orange shows what it means to see one’s cultural heritage reflected back through fiction and nonfiction alike. Stories are vital to the sustenance of memory, allow for varying perspectives on common experiences, and help preserve the traditions, ideals, and lessons of marginalized people under constant threat of erasure. 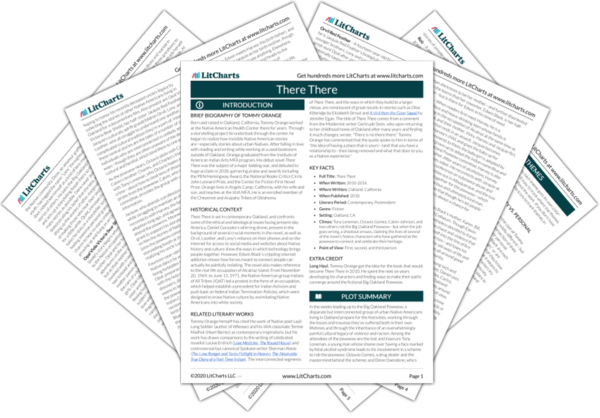 Storytelling Quotes in There There

Below you will find the important quotes in There There related to the theme of Storytelling.
Prologue Quotes

There was an Indian head, the head of an Indian, the drawing of the head of a headdressed, long-haired Indian depicted, drawn by an unknown artist in 1939, broadcast until the late 1970s to American TVs everywhere after all the shows ran out. It’s called the Indian Head test pattern. It you left the T V on, you’d hear a tone at 440 hertz—the tone used to tune instruments—and you’d see that Indian, surrounded by circles that looked like sights through riflescopes. There was what looked like a bull’s-eye in the middle of the screen, with numbers like coordinates. The Indian’s head was just above the bull’s-eye, like all you’d need to do was nod up in agreement to set the sights on the tar­get. This was just a test.

Unlock explanations and citation info for this and every other There There quote.

Getting us to cities was supposed to be the final, necessary step in our assimilation, absorption, erasure, the completion of a five-hundred-year-old genocidal campaign. But the city made us new, and we made it ours. We didn’t get lost amid the sprawl of tall buildings, the stream of anonymous masses, the ceaseless din of traffic. We found one another, started up Indian Cen­ters, brought out our families and powwows, our dances, our songs, our beadwork.

Unlock with LitCharts A+
Part I: Dene Oxendene (1) Quotes

“There is no there there,” [Rob] says in a kind of whisper, with this goofy openmouthed smile Dene wants to punch. Dene wants to tell him he’d looked up the quote in its original context, in her Everybody’s Autobiography, and found that she was talking about how the place where she’d grown up in Oakland had changed so much, that so much development had happened there, that the there of her childhood, the there there, was gone… […] Dene wants to tell him it’s what happened to Native people, he wants to explain that they’re not the same, that Dene is Native, born and raised in Oakland, from Oakland. Rob probably didn’t look any further into the quote because he’d gotten what he wanted from it.

[Norma] was crying. Dene […] thought about what it might have meant to her, losing her brother. How wrong it’d been that he’d left, like it was his loss alone. Norma crouched down and put her face in her hands. The camera was still running. He lifted it, pistol-gripped, pointed it at her, and looked away.

“One of the last things Mom said to me when we were over there, she said we shouldn’t ever not tell our stories,” I said.

“What the fuck is that supposed to mean?” “I mean having the baby.”

“Life doesn't work out the way stories do. Mom’s dead, she’s not coming back, and we’re alone, living with a guy we don’t even know who we’re supposed to call uncle. What kind of a fucked-up story is that?”

Jacquie kneeled in front of the minifridge. In her head she heard her mom say, “The spider's web is a home and a trap.” And even though she never really knew what her mom meant by it, she’d been making it make sense over the years, giving it more meaning than her mom probably ever intended. In this case Jacquie was the spider, and the minifridge was the web. Home was to drink. To drink was the trap. Or something like that. The point was Do not open the fridge. And she didn’t.

We all came to the Big Oakland Powwow for different reasons. The messy, dangling strands of our lives got pulled into a braid—tied to the back of everything we'd been doing all along to get us here. We’ve been coming from miles. And we’ve been coming for years, generations, lifetimes, layered in prayer and handwoven regalia, beaded and sewn together, feathered, braided, blessed, and cursed.

Something about it will make sense. The bullets have been coming from miles. Years. Their sound will break the water in our bodies, tear sound itself, rip our lives in half. The tragedy of it all will be unspeakable, the fact we’ve been fighting for decades to be recognized as a present-tense people, modern and relevant, alive, only to die in the grass wearing feathers.

Dene starts to say something about storytelling, some real heady shit, so Calvin tunes out. He doesn’t know what he’s gonna say when it comes around to him. He’d been put in charge of finding younger vendors, to support young Native artists and entrepreneurs. But he hadn’t done shit.

Opal pulled three spider legs out of her leg the Sunday afternoon before she and Jacquie left the home, the house, the man they’d been left with after their mom left this world. There’d recently been blood from her first moon. Both the menstrual blood and the spider legs had made her feel the same kind of shame. Something was in her that came out, that seemed so creaturely, so grotesque yet magical, that the only readily available emotion she had for both occasions was shame, which led to secrecy in both cases.

He crawls out through the black curtains. For a second the brightness of the day blinds him. He rubs his eyes and sees across from him something that doesn’t make any sense for more than one reason. Calvin Johnson, from the powwow committee, is firing a white gun at a guy on the ground, and two other guys are shooting on his left and right. One of them is in regalia. Dene gets on his stomach. He should have stayed under his collapsed booth.

Tony plays with his Transformers on the floor of his bedroom. He makes them fight in slow motion. He gets lost in the story he works out for them. It’s always the same. There is a battle, then a betrayal, then a sacrifice. 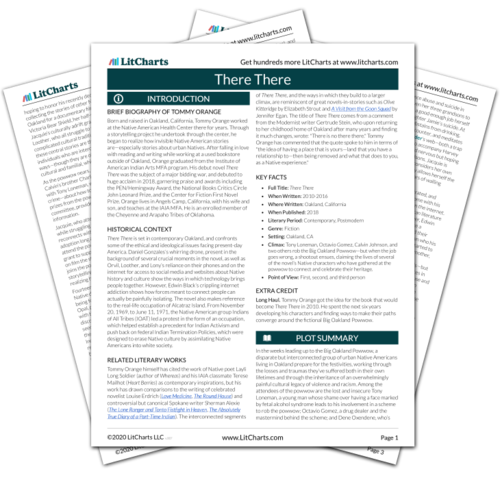 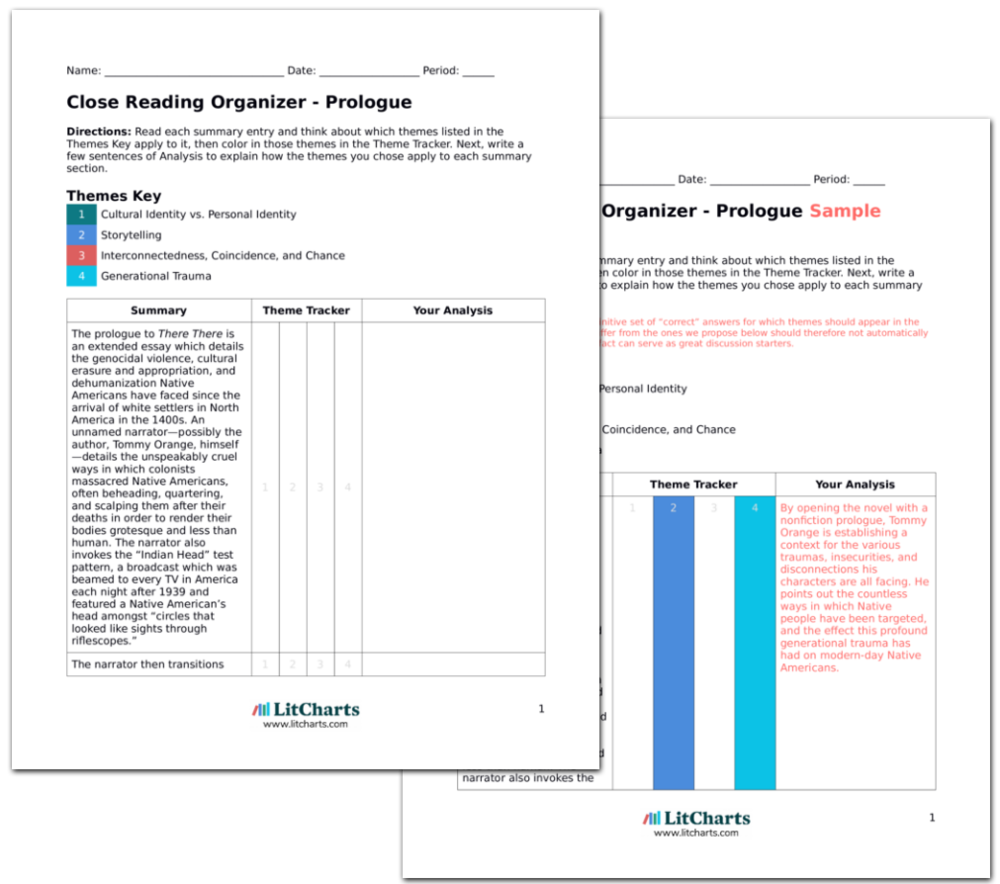