The primary story arc takes place over the course of 14 weeks in the late summer and fall of 1995, beginning when the narrator Mitch discovers that Morrie, his beloved sociology professor from college, is dying from ALS. When Mitch’s newspaper union strikes, putting him out of work for an extended period, Mitch travels each week on Tuesday from his home in Detroit to Morrie's home outside Boston for what he calls his final class with Morrie. His final thesis is the full, completed book.

Morrie grew up in New York and his family was very poor. When he was nine, his mother fell ill and died, which haunted Morrie throughout the rest of his life. His father, Charlie, was not an affectionate man, and Morrie struggled through the next two years until his father remarried. Eva, his stepmother, was kind and loving. She gave Morrie both the love he so desperately desired, and instilled in him a love for education. After a failed attempt by Morrie's father to get him a job in a fur factory, Morrie decided to become a teacher.

At the beginning of each chapter, Mitch shares the story of his relationship with Morrie during his college days. Mitch began college in 1976 at Brandeis University, and met Morrie in his first sociology class. Mitch was one of the youngest students, which he compensated for by acting very tough. Morrie, however, treated him with compassion and kindness, and the two developed a very trusting teacher/student relationship. Morrie convinced Mitch to write an honors thesis on football culture. At his graduation, Mitch promised he'd keep in touch with his professor, which he didn't follow through on.

After graduation, Mitch moved to New York to pursue his dream of being a professional piano player. He was not successful. He lived in an adjacent apartment to his favorite uncle, who died of pancreatic cancer while Mitch was living there. His uncle’s death shakes Mitch, who decides he can’t waste any more time and then earns a degree in journalism and finally settles in Detroit to work as a sports reporter. Mitch becomes very materially successful, although he isn’t all that happy.

Morrie's health begins to decline in his sixties, when asthma begins to make his life difficult. A lover of dance, he has to stop when breathing becomes hard and he begins to suffer falls. When he continues to decline, doctors run a variety of tests and in 1994 Morrie is diagnosed with ALS. He teaches his final class at Brandeis that fall, and in the spring he gives the first of three television interviews with Ted Koppel of Nightline. Koppel is friendly, yet not warm. In Detroit, Mitch catches the interview on TV and decides to visit Morrie.

Despite the fact that Morrie, now in a wheelchair, welcomes Mitch with open arms, Mitch finds their first visit awkward and uncomfortable as he realizes that he is no longer the kind and idealistic student Morrie knew in college. Morrie offers to tell Mitch what it's like to die, which makes Mitch even more uncomfortable. Mitch struggles to answer questions about how fulfilled he is in his life, realizing that he isn't. When he leaves, he again promises Morrie that he'll come back and visit.

Mitch travels to the UK to cover Wimbledon and finds himself thinking about Morrie the entire time. The day after he returns to Detroit, his newspaper union goes on strike. After sitting around for a week, he calls Morrie and asks to come visit again. At the beginning of this visit and every visit after, Mitch arrives bearing food after remembering how much Morrie loves food. When Morrie begins to cry talking about how he's so much more affected by death in the world now that he himself is dying, Mitch is again uncomfortable. Morrie promises that he will show Mitch that crying is okay.

Throughout the next several Tuesdays, Mitch begins to assist Morrie's nurse, Connie, with Morrie's care. The first time he lifts Morrie from his wheelchair to his armchair, he feels how the disease has made Morrie into dead weight, which he is disturbed by. After that, he begins to bring tape recorders and a list of topics for he and Morrie to discuss as a way of keeping Morrie alive in memory once he's gone. This is exactly what Morrie wants. After he found out he was dying, he began to write down tidbits of wisdom about living in the shadow of death. The consummate teacher, he wants to teach the world about life, death, and how to truly live.

Morrie's second interview with Ted Koppel shows Koppel as significantly warmer, and Morrie's celebrity spreads even further after it airs. On the fourth Tuesday, Mitch and Morrie talk about death, and Morrie shares some of his wisdom about creating personal culture by borrowing from different religions. He says he's especially drawn to nature now that the end is drawing near, as though it's the first time he's noticing it.

By the next visit, Mitch begins to realize that Morrie craves human contact more and more as the disease takes over. He needs to be constantly adjusted in his armchair to stay comfortable, and needs his microphone for the tape recorder adjusted regularly as well. This leads into a discussion on the importance of family, and Mitch shares with the reader that his own brother, Peter, is living in Spain, battling the same form of pancreatic cancer that killed his uncle.

The next several Tuesdays, Morrie's health declines further. He becomes unable to use the toilet unassisted, and he is no longer capable of eating solid food. Despite not sleeping well due to coughing, he still insists on seeing visitors. Charlotte, his wife, insists to Mitch that their visits give Morrie purpose in light of his disease. Morrie and Mitch discuss how Morrie is dealing with his growing dependence on others by detaching from fear and other negative emotions, and he still manages to maintain perspective about aging thanks to his belief that aging is growth rather than decay. By the eighth Tuesday, Morrie is having good days and many bad days, but still believes that it is important to pursue making people happy rather than making money.

On the tenth Tuesday, Mitch's wife, Janine, accompanies him to visit Morrie. She is a professional singer and agrees to sing for Morrie when he asks, which surprises Mitch. Morrie shows his ability to connect with anyone, and he and Janine get along as though it wasn't the first time they'd met. Morrie then reveals his thoughts on marriage and why Mitch's generation experiences so much divorce. His ideas center on his guiding beliefs of having compassion and understanding for one's partner, and the importance of love.

The following week, Mitch has become even more involved in Morrie's care, and helps loosen the mucus in his lungs by pounding on his back. By this time, Morrie has been slowly breaking down Mitch's walls, and Mitch is becoming more sensitive and compassionate, and less focused on work. Morrie encourages Mitch to create his own personal culture, as Morrie did, that borrows the parts of cultures and religions that Mitch finds useful and helpful. Morrie's culture allows him to focus on his relationships with friends and family, which he believes is even more important given his impending death. When Morrie gives his final interview for Nightline the next week, he and Koppel speak like friends, and more than an interview, it is a "sad farewell." A few days later when Mitch is visiting, Morrie recounts the story of one of his good friends who wasn't there for Morrie when Charlotte got sick, after which they lost contact. The friend died of cancer a few years before the present day, and Morrie regrets deeply not reconnecting with him. He also tells Mitch that if he were to have another son, he'd like that child to be Mitch.

The next week, Mitch asks Morrie what the perfect day would be, and what Morrie describes is shockingly ordinary. He encourages Mitch to try to patch things up with his brother, who is still struggling with cancer and not accepting calls from his family. When Mitch returns on the fourteenth week, Morrie is in bed and doing poorly. Mitch cries as he says goodbye, as does Morrie.

Morrie dies the following Saturday, and Mitch attends the funeral. It is a small affair in a beautiful park, and Mitch thinks it's fitting that the funeral takes place on a Tuesday. Not long after, Mitch is able to make contact with his brother, and their future relationship seems hopeful. 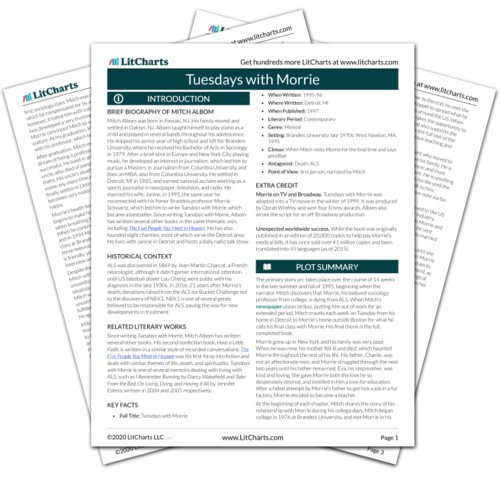 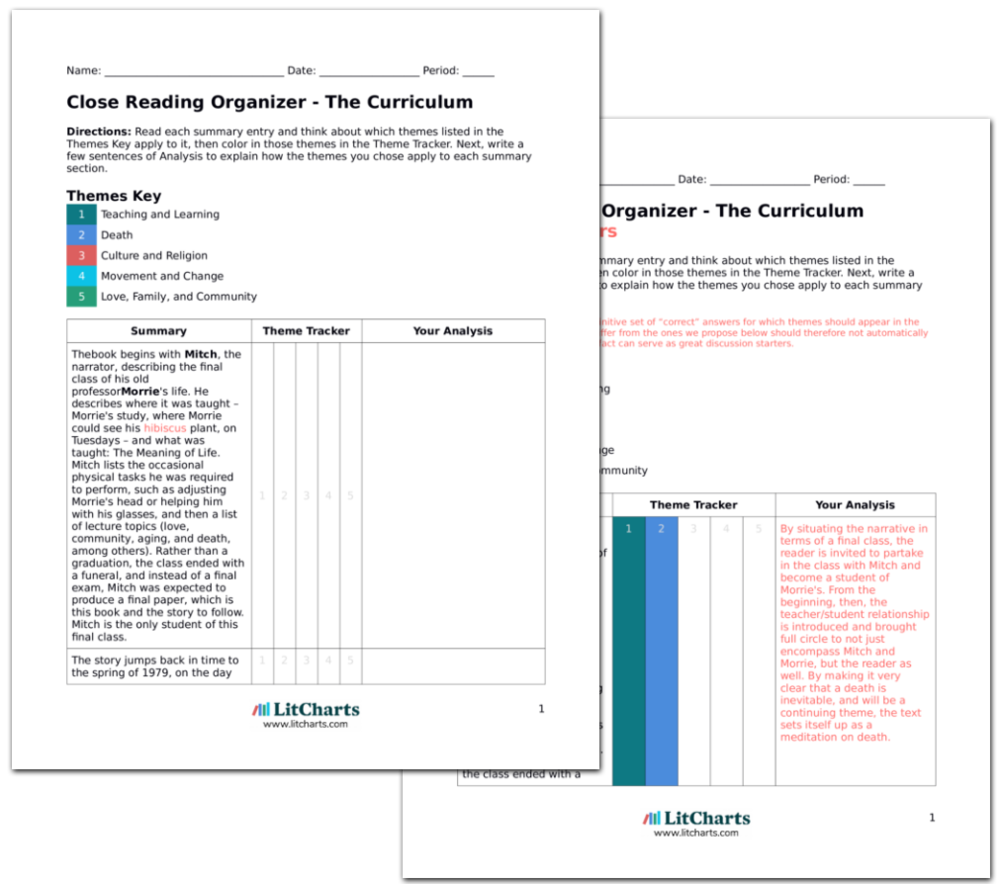