In the forward to Twilight of the Idols, Nietzsche states the book’s central purpose: to examine and destroy the antiquated idols (ideals or values) that are responsible for the nihilism and decadence that plague his contemporary society. Nietzsche will “pose questions here with a hammer” to accomplish this task.

Chapter Two, “Maxims and Arrows,” consists of a numbered series of maxims (or aphorisms) that scathingly—and sometimes humorously—critique traditional morality.

In “The Problem of Socrates,” Nietzsche challenges the value judgments of ancient philosophers. He condemns Socrates for introducing dialectics into western philosophy. Nietzsche thinks that dialectical thinking is bad for society because it allows weaker philosophical views to gain traction. It also encourages people to become skeptical of reality in a way that ultimately devalues life—even as it purports to do the opposite. Nietzsche concludes that Socrates’s commitment to extreme rationalism has fooled philosophers and moralists into believing they can eliminate decadence and immorality through logic and reason. In reality, “the entire morality of improvement,” which includes traditional Christian morality, is to blame for the decadence that characterizes the modern world.

In “‘Reason’ in Philosophy,” Nietzsche accuses philosophers of worshipping the past at the expense of valuing lived human life. The philosophies of Socrates and Plato, in particular, have taught people to distrust their “senses” and view the physical world as “an illusion.” Nietzsche thinks people ought to trust their senses—not condemn them as evidence of humanity’s fallen, degraded state. He concludes this section with four propositions. #1: The only reality is that which we can discern with our senses. #2: Concepts that earlier philosophers have called “being” (reality) are, in fact, “non-being” (non-reality). #3: It’s pointless to consider the existence of “another” or “better” world. #4: dividing the world into a “real” and “apparent” world—whether in Christian terms (Heaven and Earth) or philosophical terms—signifies a “declining” society.

“How the ‘Real World’ at last Became a Myth” consists of six aphorisms that summarize how philosophy came to reject the “real world.” #1: People exist in the real (physical) world. #2: The “real” (ideal) world exists but is unattainable. #3: Because the real world is unattainable, people begin to question its existence. #4: The real world is no longer a relevant concept, so people no longer feel obligated to attain it. #6: Society thus abandons the real world and replaces it with the “apparent world.”

In “The Four Great Errors,” Nietzsche proposes four great errors that philosophy has made throughout history. The first error is “mistaking the consequence for the cause.” Most traditional systems of morality fall victim to this error. Religion, for instance, claims that happiness comes from virtue when, in fact, behaving virtuously is only possible if one already has a happy life. While the Church may claim that vice leads to ruin, Nietzsche argues that vice is actually a symptom of ruin. The second error is “false causality,” which refers to how people mistakenly believe they are in control of and can understand their behaviors when, in reality, a person’s motives are mysterious and instinctual. The third error is the “error of imaginary causes.” Nietzsche thinks that people mistake their reaction to a stimulus for the cause of that stimulus. People assign subjective meaning to events they can’t control because they are uncomfortable with uncertainty. Nietzsche calls this humanity’s “cause-creating drive,” and he believes that this drive is the foundation of all traditional morality and religion. Finally, the fourth error is free will. Nietzsche argues that theologians invented the concept of free will to make people feel responsible for their immoral behaviors and dependent on religion for redemption.

“‘Improvers’ of Mankind,” critiques philosophers and moralists who throughout history have tried to improve humanity. Nietzsche condemns these people for forcing subjective moral frameworks upon society. Instead, Nietzsche believes philosophers should be “beyond good and evil.” He thinks that the people who want to “improve” human behavior are actually “taming” people, thus creating a fearful and subservient class of followers.

“What the Germans Lack,” focuses on Nietzsche’s contemporary German society. Nietzsche believes that German culture has suffered because the nation has prioritized politics and economics over culture and intellect. He criticizes higher education in Germany, which has declined in quality since becoming more democratic—now that education is no longer reserved for the best students, Nietzsche argues, Germans are no longer “free” to give their children “a noble education.”

“Expeditions of an Untimely Man,” is the book’s longest section. In it, Nietzsche analyzes—often critically—cultural figures such as George Eliot, Thomas Carlyle, Emerson, and Schopenhauer, among others, to offer additional insight into the problems that plague contemporary culture. He argues that art can’t exist without intoxication, a point he examines through his concept of the Apollonian and Dionysian. Another point Nietzsche raises in this section is his opposition to contemporary society’s egalitarian, democratic politics. Nietzsche thinks that the liberal social institutions of the modern world (which embrace altruism and equality in the name of morality) have made people weak-willed and cowardly. They have imperiled freedom and prevented the world’s truly powerful, great people from realizing their own potential.

In “What I Owe to the Ancients,” Nietzsche returns to his opening attack on Plato and ancient Greek philosophy. He argues that Platonic philosophy was a precursor to Christianity. Furthermore, its fixation on the ideal has greatly harmed humanity. Nietzsche again invokes the Dionysian, arguing that it is the key to letting humanity restore “the external joy of becoming” and the “will to life” that it has lost to years of philosophers and moralists teaching it to devalue life and human instinct.

Nietzsche adapts the book’s brief final section, “The Hammer Speaks,” from Part III of an earlier work of his entitled Thus Spoke Zarathustra. In this chapter, Nietzsche relays a dialogue between a piece of charcoal and a diamond. The charcoal asks the diamond why it (the charcoal) is so soft when the diamond is so hard—after all, they are so closely related. Then, speaking as the hammer (an image Nietzsche resurrects from Twilight of the Idols’s foreword), Nietzsche urges his audience to “become hard” and “create” with him. 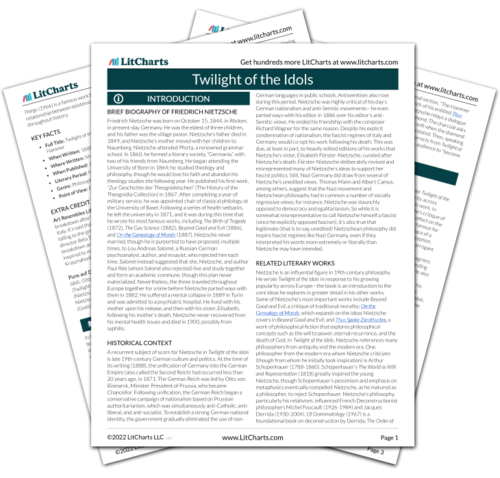 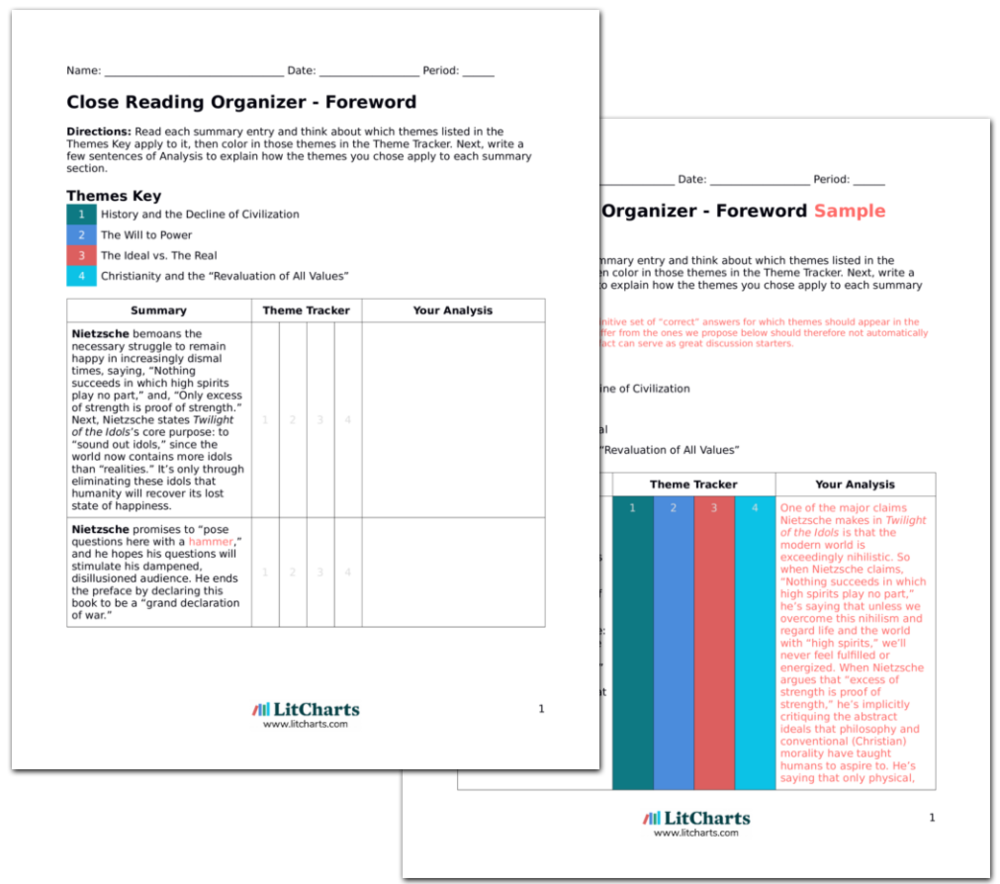