In April of 1975, the rambunctious, five-year-old Loung Ung lives with her large, loving family in Phnom Penh. Ma is a beautiful, proper woman who was born in China, while Pa works as a police captain for the Lon Nol government. Loung enjoys a comfortable middle-class lifestyle with her six siblings: eighteen-year-old Meng, sixteen-year-old Khouy, fourteen-year-old Keav, ten-year-old Kim, eight-year-old Chou, and three-year-old Geak.

One day trucks roll through the streets occupied by men wearing black clothing with red scarves tied around their heads. The men command everyone to leave Phnom Pen, and Keav tells Loung that the men are called the Khmer Rouge. The Ungs travel for a grueling eight days—first in Pa’s truck and then on foot—until they arrive at the village of Krang Truop, where they are to live with Ma’s brothers. To survive, Pa says the family must pretend to be peasants and never speak of Phnom Penh, since the Angkar—the name of the new government—hates any signs of worldliness or association with the West. When people arrive from the city who could recognize Pa, the Ungs are forced to leave again. They are sent to the village of Anlungthmor, where they must perform manual labor every day for meager rations. When famine strikes, hundreds die. With their lighter skin—the result of Ma’s Chinese heritage—and lack of farming knowledge, the Ungs attract negative attention from the rest of the villagers. Pa says the Khmer Rouge has started killing anyone perceived as a threat to the new government, and seven months after leaving Phnom Penh the family moves again to the village of Ro Leap.

The original villagers of Ro Leap, called “base people” and considered “model citizens” by the Khmer Rouge, are hostile toward the family. Loung can’t understand why the villagers look at them so angrily when, to her, they are all the same. Because everyone must wear the black uniform of the Khmer Rouge, the soldiers destroy the new arrivals’ clothing. Loung watches in anguish as her beloved red dress, which Ma made her for New Years, is lit on fire.

Despite the professed equality of “Democratic Kampuchea,” as the country is now called, the new villagers are treated like slaves. As light-skinned Chinese-Cambodians, Loung’s family must work harder than others to prove themselves valuable. Ma and Pa force Khouy to marry a girl from a nearby village to decrease his likelihood of being recruited to the Khmer Rouge army. She and Khouy are sent to a labor camp, along with Meng. The brothers bring extra food home when they are allowed to visit, but these visits become increasingly infrequent. Soon, all teenagers, including Keav, are forced to go to a work camp.

Hundreds continue to die from starvation, disease, and executions. Rumors circle about a mysterious man named Pol Pot as the leader of the Angkar. Bartering for food is illegal, but Pa manages to get extra rice in exchange for jewelry Ma had hidden from the soldiers. One night, in a moment of desperation, Loung steals a handful of this rice for herself. Despite sensing that Pa knows her guilt, she cannot bring herself to admit it.

After six months in her work camp, Keav dies of dysentery. Pa says they must go on as if nothing has happened if they are to survive. Four months later, men arrive at their hut demanding Pa come with them. Understanding that this is the end, Pa embraces Loung one last time and tells Kim to look after the household. Loung reflects that war has filled her with hatred and rage. Another New Year’s passes, making everyone a year older. In keeping with Pa’s request, Kim now acts as the head of the household and begins stealing corn for the family, as they are yet again close to starvation. One night, however, soldiers catch and brutally beat him. Kim survives but never steals again.

The Khmer Rouge have started killing the children of the people they’ve already executed, and Ma forces Loung, Kim, and Chou to split up for their safety. Kim walks off alone, but Loung and Chou find a work camp together. At night they must listen to propaganda lessons fervently praising the might of the Angkar and Pol Pot. After three months Loung is sent to a camp for child soldiers, where her supervisors teach the girls that the Youns—Vietnamese soldiers—are savage monsters bent on destroying them. After seven months, Loung is able to visit Ma. She feels guilty as she sees how frail Geak looks and learns that Chou has visited often with rice. Later, famine hits again and Loung grows so ill that she must walk to the only infirmary for miles. There, she is surprised to be reunited with Ma, Geak, Chou, Kim, and Meng. The family is able to stay happily together for a few days. Still starving, however, Loung guiltily steals a ball of rice from an old woman.

Back at her camp, rumors of Youn invasions spread. One day Loung feels as though Ma and Geak are calling out to her and sneaks away to see them, only to learn that soldiers took her mother and sister away the day before. Loung is so overwhelmed with grief that she has no memory of how she spends the next three days.

The Youns invade, and a bomb sets Loung’s camp ablaze. Everyone runs away, joining a mob of traffic as those from other camps do the same. Loung is able to find Kim and Chou in the crowd, and they walk for days until they reach men whom Loung realizes are the Youns she was warned about; she is surprised at how human they look. The Youns direct them to a refugee camp in Pursat City. There, Loung learns that the Youns marched into Cambodia three weeks earlier and defeated Pol Pot. She and her siblings are able to find a family to take them in, but their foster parents are cold and cruel. One day, Paof, their fourteen-year-old foster brother, tries to sexually assault Loung. Later, a Youn soldier attempts to rape Loung while she is gathering firewood and she only narrowly escapes. Upon returning home, Loung’s foster mother scolds her for bringing back too little wood and says she will amount to nothing. Loung reflects that she will amount to something because of everything Pa taught her.

The Khmer Rouge attack the Youn camp, but Loung and her siblings survive by taking shelter in an abandoned warehouse. Later Kim is able to find Meng and Khouy, who escaped from their own labor camps during the initial Youn invasion and also made it to Pursat City. Both brothers look tired and hardened, but Loung is happy to be taken care of once again. The Youns capture a Khmer Rouge soldier and a frenzied mob of villagers demand he be released to them so that they can kill him. Loung crawls her way to the front of the crowd to watch his brutal execution.

At the end of April, Loung and her siblings leave the displacement camp and walk for eighteen days toward Bat Deng, where their uncles live. There, they are welcomed by their surviving family members. An uncle arranges for Meng to marry Eang, a girl who was away at school during the purge of Phnom Penh and whose family is in Vietnam. After three months, Eang and Meng go to Vietnam to reunite with Eang’s family. Meng returns days later and talks excitedly about moving to America. First they must cross through Vietnam into Thailand, however, in a dangerous and costly human smuggling operation. Meng only has enough money for two to go and chooses to take Loung, as she is still young enough to learn English. In five years, Meng says he will have saved enough money to send for the rest of the family.

Meng and Loung are smuggled to Vietnam on a fishing boat. They live in Saigon with Eang’s parents before being moved to floating houseboats with Eang’s sisters. After three quiet months, they begin a harrowing boat journey and eventually reach the Lam Sing Refugee Camp in Thailand. Because they must obtain a sponsor before coming to America, Meng converts to Christianity in the hopes of attracting support from a church group. Months pass, and Loung and her family are among the poorest of the refugee camp. Finally, Meng announces they have obtained a sponsor and are going to a place called Vermont.

In celebration, Eang takes Loung to buy fabric for a new dress. She suggests an orange, red, and blue checkered cloth, and seeing the red Loung agrees. As Loung packs the night before they leave, however, she realizes that her new dress cannot ever replace the one Ma made, and that she is really gone. Loung thinks of Pa as she drifts off to sleep, worrying that his spirit will not be able to cross the ocean to be with her in America. In her dreams, Pa tells her that he will find her wherever she goes. The next morning Loung, Meng, and Eang board an airplane for America.

In the story’s epilogue, the now adult Loung reflects on her life in America. Meng and Eang live in Vermont with their two daughters. Both obtained jobs at IBM, despite having little knowledge of American culture, and support the entire family. Loung notes that current immigration laws mean their family will likely never be reunited, however. Loung was able to attend college and eventually moved to Washington, D.C. to work with the Campaign for a Landmine-Free World. She is now the CLFW spokesperson and travels across the world to spread its message. Loung tells the story of how, after fifteen years, she returned to Cambodia for the first time. Her family greeted her at the airport but seemed unsure of how to react. But when Chou and Loung lock eyes, the former bursts into tears. The two hold hands as if no time has passed, and together walk out of the airport. 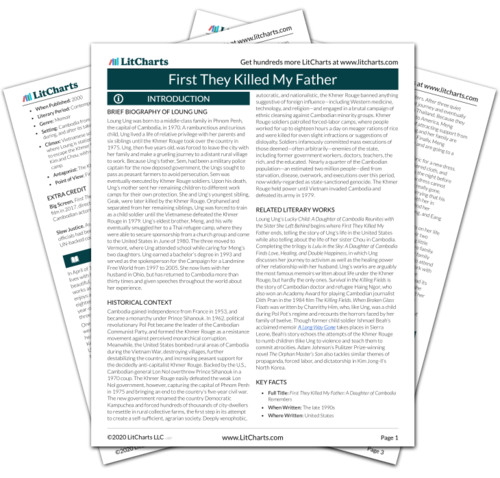 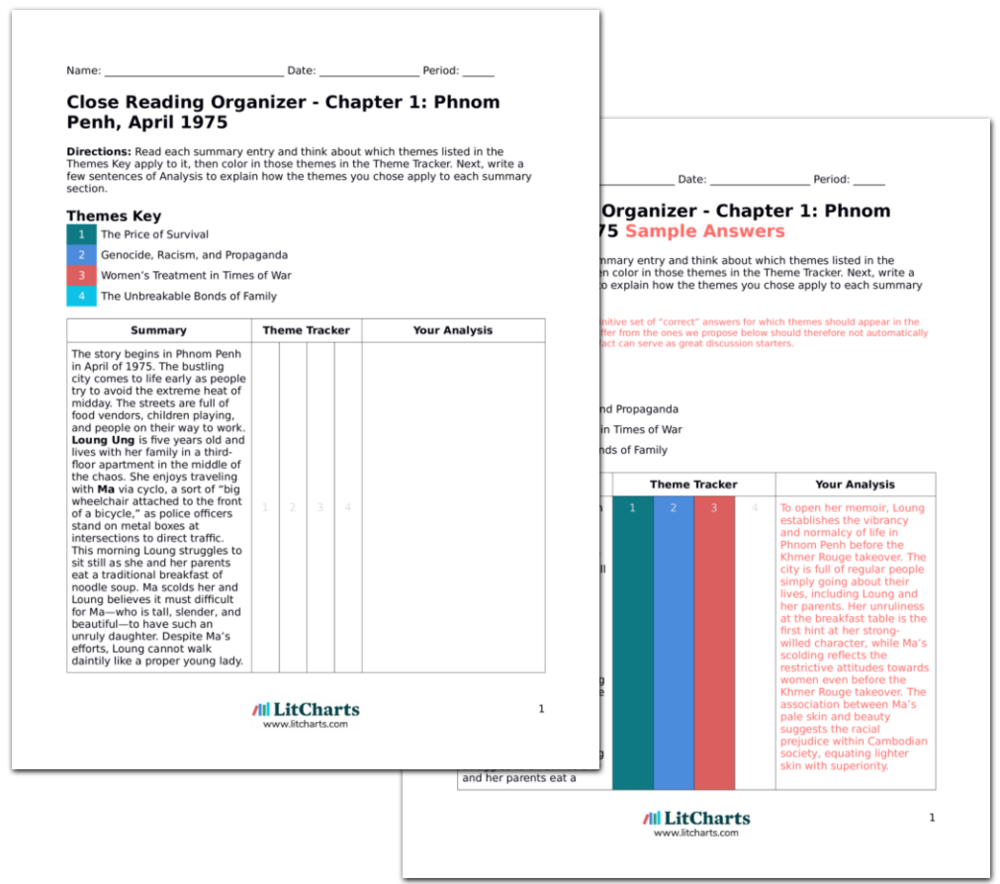