Download this LitChart! (PDF)
Teachers and parents! Struggling with distance learning? Our Teacher Edition on It Ends with Us can help.

Welcome to the LitCharts study guide on Colleen Hoover's It Ends with Us. Created by the original team behind SparkNotes, LitCharts are the world's best literature guides.

It Ends with Us: Introduction

A concise biography of Colleen Hoover plus historical and literary context for It Ends with Us.

It Ends with Us: Plot Summary

A quick-reference summary: It Ends with Us on a single page.

It Ends with Us: Detailed Summary & Analysis

In-depth summary and analysis of every chapter of It Ends with Us. Visual theme-tracking, too.

It Ends with Us: Themes

Explanations, analysis, and visualizations of It Ends with Us's themes.

It Ends with Us: Quotes

It Ends with Us's important quotes, sortable by theme, character, or chapter.

It Ends with Us: Characters

Description, analysis, and timelines for It Ends with Us's characters.

It Ends with Us: Symbols

Explanations of It Ends with Us's symbols, and tracking of where they appear.

It Ends with Us: Theme Wheel

An interactive data visualization of It Ends with Us's plot and themes.

Colleen Hoover was born on December 11, 1979, to Eddie Fennell and Vannoy Fite in Sulphur Springs, Texas. She was raised in nearby Saltillo, Texas. Hoover witnessed episodes of domestic violence from a young age, and her father’s abuse of her mother deeply impacted Hoover in childhood. After graduating from Saltillo High School in 1998, she married husband Heath Hoover in 2000. The couple has since welcomed three sons. Hoover later obtained a degree in social work from Texas A&M – Commerce. Hoover began writing while holding diverse roles in the fields of social work and teaching. Since 2012, she has self-published several novels and book series, including Slammed, Hopeless, and Finding Cinderella. Many of her works have been featured on the New York Times Best Seller list. She published It Ends with Us in 2016, though it did not see broad critical or cultural acclaim until much later. The novel’s sequel, It Starts with Us, was published in 2022. In 2015, Hoover and her family launched a signed book subscription service, The Bookworm Box, which seeks to promote a love of reading and raise charitable funds for various organizations.
Get the entire It Ends with Us LitChart as a printable PDF.
"My students can't get enough of your charts and their results have gone through the roof." -Graham S.
Download 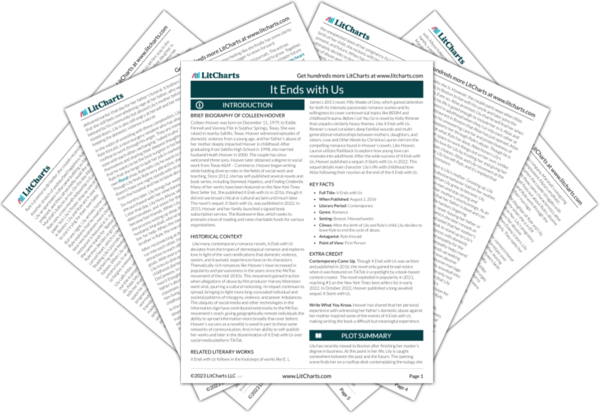 Historical Context of It Ends with Us

Like many contemporary romance novels, It Ends with Us deviates from the tropes of stereotypical romance and explores love in light of the vast ramifications that domestic violence, sexism, and traumatic experiences have on its characters. Thematically rich romances like Hoover’s have increased in popularity and pervasiveness in the years since the MeToo movement of the mid-2010s. This movement gained traction when allegations of abuse by film producer Harvey Weinstein went viral, spurring a cultural reckoning. Its impact continues to spread, bringing to light more long-concealed individual and societal patterns of misogyny, violence, and power imbalances. The ubiquity of social media and other technologies in the Information Age have contributed extensively to the MeToo movement’s reach, giving geographically remote individuals the ability to spread information more broadly than ever before. Hoover’s success as a novelist is owed in part to these same networks of communication, first in her ability to self-publish her works and later in the dissemination of It Ends with Us over social media platform TikTok.

Other Books Related to It Ends with Us

It Ends with Us follows in the footsteps of works like E. L. James’s 2011 novel, Fifty Shades of Grey, which gained attention for both its intensely passionate romance scenes and its willingness to cover controversial topics like BDSM and childhood trauma. Before I Let You Go is novel by Kelly Rimmer that unpacks similarly heavy themes. Like It Ends with Us, Rimmer’s novel considers deep familial wounds and multi-generational relationships between mothers, daughters, and sisters. Love and Other Words by Christina Lauren mirrors the compelling romance found in Hoover’s novels. Like Hoover, Lauren utilizes flashback to explore how young love can resonate into adulthood. After the wide success of It Ends with Us, Hoover published a sequel, It Starts with Us, in 2022. This sequel details main character Lily’s life with childhood love Atlas following their reunion at the end of the It Ends with Us.
Key Facts about It Ends with Us

Extra Credit for It Ends with Us

Contemporary Come Up. Though It Ends with Us was written and published in 2016, the novel only gained broad notice when it was featured on TikTok in a spotlight by a book-based content creator.  The novel exploded in popularity in 2021, reaching #1 on the New York Times best sellers list in early 2022. In October 2022, Hoover published a long-awaited sequel, It Starts with Us.

Write What You Know. Hoover has shared that her personal experience with witnessing her father’s domestic abuse against her mother inspired some of the events of It Ends with Us, making writing the book a difficult but meaningful experience. 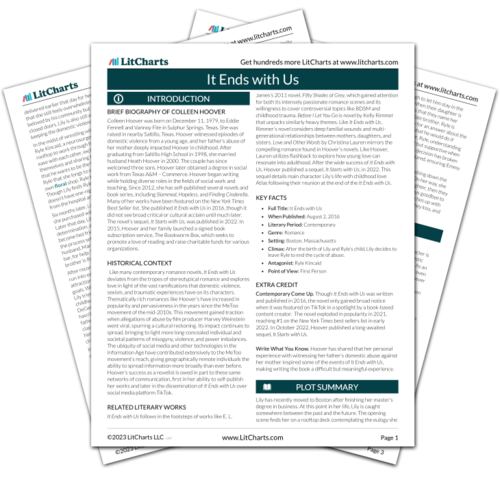 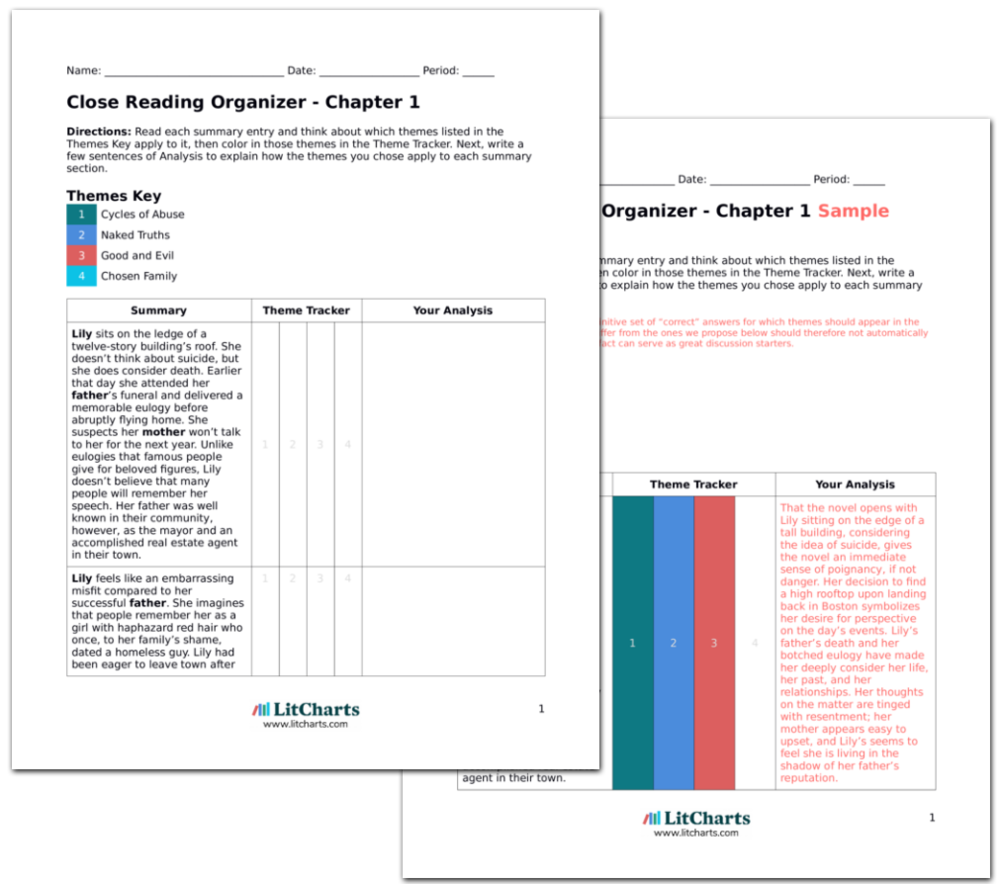