Download this LitChart! (PDF)
Teachers and parents! Struggling with distance learning? Our Teacher Edition on Shuggie Bain can help.

Welcome to the LitCharts study guide on Douglas Stuart's Shuggie Bain. Created by the original team behind SparkNotes, LitCharts are the world's best literature guides.

A concise biography of Douglas Stuart plus historical and literary context for Shuggie Bain.

A quick-reference summary: Shuggie Bain on a single page.

In-depth summary and analysis of every chapter of Shuggie Bain. Visual theme-tracking, too.

Explanations of Shuggie Bain's symbols, and tracking of where they appear.

An interactive data visualization of Shuggie Bain's plot and themes.

Douglas Stuart was born in Glasgow, Scotland, in the Sighthill neighborhood, where he grew up with his two older siblings. His father left early in his life, and he lived with his mother and siblings until his mother passed from complications of alcoholism when he was 16. After her death, he moved into a boarding house on his own. Stuart went on to earn his bachelor’s at the Scottish College of Textiles and his master’s degree at the Royal College of Art in London. He has primarily worked in the fashion industry in New York with several world-renowned brands. In addition to his work in textiles, he began writing smaller pieces that were published in The New Yorker and LitHub. His debut novel, Shuggie Bain, received broad praise and won the Booker Prize in 2020. Heriot-Watt University subsequently awarded Stuart an honorary doctorate in 2021. His second novel, Young Mungo, was published in April 2022. Stuart is a dual citizen of the United Kingdom and the United States, and he currently lives in New York with his husband, Michael Cary.
Get the entire Shuggie Bain LitChart as a printable PDF.
"My students can't get enough of your charts and their results have gone through the roof." -Graham S.
Download 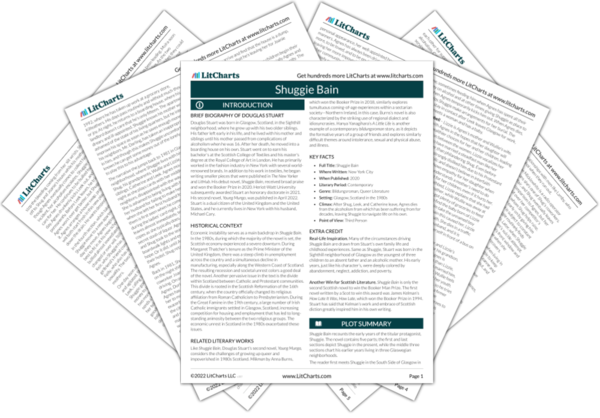 Economic instability serves as a main backdrop in Shuggie Bain. In the 1980s, during which the majority of the novel is set, the Scottish economy experienced a severe downturn. During Margaret Thatcher’s tenure as the Prime Minister of the United Kingdom, there was a steep climb in unemployment across the country and a simultaneous decline in manufacturing, especially along the Western Coast of Scotland. The resulting recession and societal unrest colors a good deal of the novel. Another pervasive issue in the text is the divide within Scotland between Catholic and Protestant communities. This divide is rooted in the Scottish Reformation of the 16th century, when the country officially changed its religious affiliation from Roman Catholicism to Presbyterianism. During the Great Famine in the 19th century, a large number of Irish Catholic immigrants settled in Glasgow, Scotland, increasing competition for housing and employment that has led to long-standing animosity between the two religious groups. The economic unrest in Scotland in the 1980s exacerbated these issues.

Other Books Related to Shuggie Bain

Like Shuggie Bain, Douglas Stuart’s second novel, Young Mungo, considers the challenges of growing up queer and impoverished in 1980s Scotland. Milkman by Anna Burns, which won the Booker Prize in 2018, similarly explores tumultuous coming-of-age experiences within a sectarian society—Northern Ireland, in this case. Burns’s novel is also characterized by the striking use of regional dialect and idiosyncrasies. Hanya Yanagihara’s A Little Life is another example of a contemporary bildungsroman story, as it depicts the formative years of a group of friends and explores similarly difficult themes around intolerance, sexual and physical abuse, and illness.
Key Facts about Shuggie Bain

Real-Life Inspiration. Many of the circumstances driving Shuggie Bain are drawn from Stuart’s own family life and childhood experiences. Same as Shuggie, Stuart was born in the Sighthill neighborhood of Glasgow as the youngest of three children to an absent father and an alcoholic mother. His early years, just like his character’s, were deeply colored by abandonment, neglect, addiction, and poverty.

Another Win for Scottish Literature. Shuggie Bain is only the second Scottish novel to win the Booker Man Prize. The first novel written by a Scot to win this award was James Kelman’s How Late It Was, How Late, which won the Booker Prize in 1994. Stuart has said that Kelman’s work and embrace of Scottish diction greatly inspired him in his own writing. 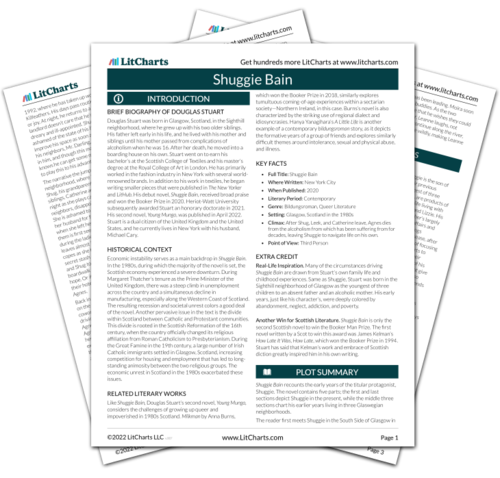 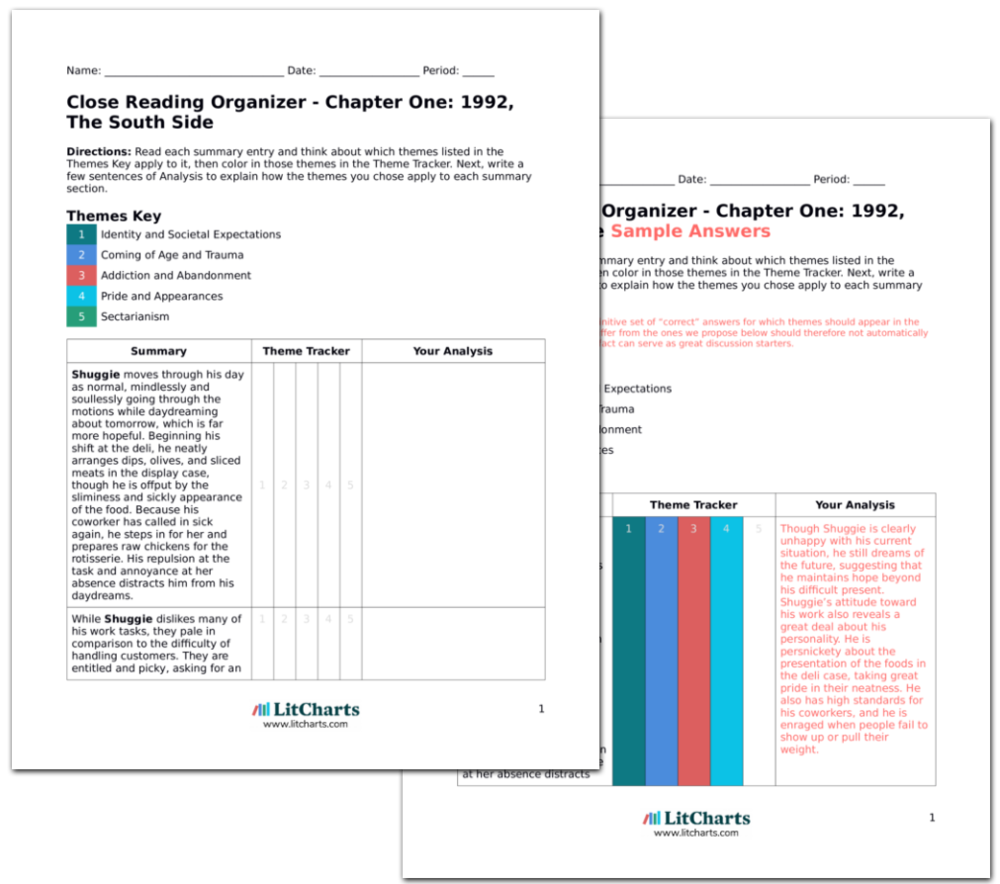