Get LitCharts A+
LitCharts assigns a color and icon to each theme in The Awakening, which you can use to track the themes throughout the work.

A person in the middle or high society of 19th century New Orleans lived by intricate systems of social rules. These largely unspoken rules governed minute details of dress and expression, and prescribed certain behaviors for different social roles: mothers and fathers, husbands and wives, virgins and spinsters all measured against their respective Victorian ideals. Of course, every society in every period has created its own unwritten laws; but The Awakening takes place in a society whose rules were particularly stringent. As a young woman, Edna assumes that she must live and die according to these rules, like all the people who surround her.

From an early age, she learns to separate her murky, curious, disobedient inner life from the anonymous outer life—a quality other people perceive as reserve. But sometime during her marriage the inner life goes dark under the weight of convention, and Edna enters a sort of long sleep. Mademoiselle Reisz’s music, Robert’s love, and the strange beauty of the sea startle her awake. Thought, emotion, and will return to her all at once; she examines her various roles as wife, mother, and friend, and finds them all duplicitous and bizarre.

Soon, she learns to ignore convention and to behave according to her idiosyncratic beliefs and impulses. But, as we know, this is much easier said than done. Edna abandons her entire worldview (which, borrowed though it was, had guided her every step) in exchange for—what? When the initial destructive thrill weakens and fades, she finds herself in an emotional wilderness. She is strong enough to denounce and reject a false code, but not quite strong enough to invent a true one. Without it, she is lost—she must live at the mercy of her emotions, which are violent with contradiction. In a way, Chopin’s novel is a cautionary tale: though individuality and inwardness must struggle against convention, one cannot live by inwardness alone. 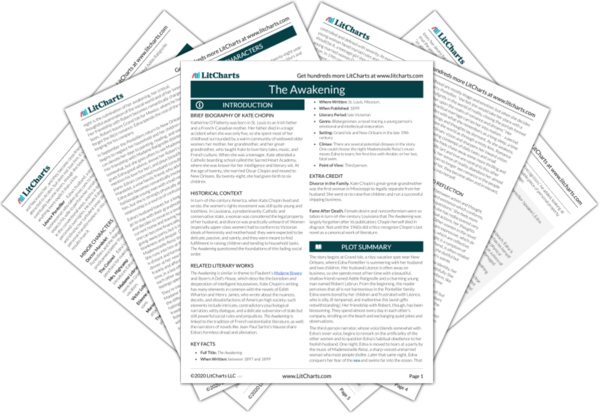 Convention and Individuality Quotes in The Awakening

Below you will find the important quotes in The Awakening related to the theme of Convention and Individuality.
Chapter 6 Quotes

Mrs. Pontellier was beginning to realize her position in the universe as a human being, and to recognize her relations as an individual to the world within and about her.

At a very early period she had apprehended instinctively the dual life—that outward existence which conforms, the inward life which questions.

The acme of bliss, which would have been marriage with the tragedian, was not for her in this world. As the devoted wife of a man who worshipped her, she felt she would take her place with a certain dignity in the world of reality, closing the portals forever behind her upon the realm of romance and dreams.

She was blindly following whatever impulse moved her, as if she had placed herself in alien hands for direction, and freed her soul from responsibility.

Once she stopped, and taking off her wedding ring, flung it upon the carpet. When she saw it lying there, she stamped her heel upon it, striving to crush it. But the small boot heel did not make an indenture, not a mark upon the little glittering circlet.

The little glimpse of domestic harmony which had been offered her, gave her no regret, no longing. It was not a condition of life which fitted her, and she could see in it but an appalling and hopeless ennui. She was moved by a kind of commiseration for Madame Ratignolle,—a pity for that colorless existence which never uplifted its possessor beyond the region of blind contentment, in which no moment of anguish ever visited her soul, in which she would never have the taste of life’s delirium.

She won’t go to the marriage. She says a wedding is one of the most lamentable spectacles on earth.

“One of these days,” she said, “I’m going to pull myself together for a while and think—try to determine what character of a woman I am; for, candidly, I don’t know. By all the codes which I am acquainted with, I am a devilishly wicked specimen of the sex. But some way I can’t convince myself that I am.”

There was with her a feeling of having descended in the social scale, with a corresponding sense of having risen in the spiritual. Every step which she took toward relieving herself from obligations added to her strength and expansion as an individual. She began to look with her own eye: to see and apprehend the deeper undercurrents of life.

You have been a very, very foolish boy, wasting your time dreaming of impossible things when you speak of Mr. Pontellier setting me free! I am no longer one of Mr. Pontellier’s possessions to dispose of or not. I give myself where I choose. If he were to say, ‘Here, Robert, take her and be happy; she is yours,’ I should laugh at you both.

It was you who awoke me last summer out of a life-long, stupid dream.

With an inward agony, with a flaming, outspoken revolt against the ways of Nature, she witnessed the scene of torture.