Book I, The Sword in the Stone, introduces the character of Wart who later becomes King Arthur. Wart lives with his guardian Sir Ector and Sir Ector's son Kay at the Castle Sauvage, under the tutelage of an eccentric magician Merlyn. Throughout his early years, Wart is turned into many different animals by Merlyn, such as an ant, a fish, a badger, and a goose, and each adventure serves as a lesson about violence and authority that will inform his later years as King of England.

After Kay is knighted and Wart becomes his squire, they all travel to London for a tournament. The old King Uther Pendragon has recently died leaving no heir and it is proclaimed that whoever can pull a mysterious sword from the stone will be the new King of England. While on an errand as Kay's squire, Wart pulls the sword from the stone without realizing what he's doing and is crowned King. Merlyn later tells Wart that he is King Uther's illegitimate son and that Merlyn had known this all along.

In Book II, The Queen of Air and Darkness, we are introduced to the Orkney brothers—Gawaine, Gaheris, Gareth and Agravaine. They are Queen Morgause and King Lot's sons, and half-brothers to Arthur. Meanwhile, a young King Arthur is attempting to curtail the Gaelic revolt being led by King Lot. Arthur is beginning to plan how to rule when the battle is over. He comes up with the idea of the Round Table: the Order of the Knights of the Round Table will be his attempt to use Might for Right. He will band together knights who only use their power and violence for justice and the table will be round so that all knights are equal.

Ultimately, Arthur squashes the rebellion and Queen Morgause comes to court, to reconcile with Arthur for King Lot. She ends up seducing him and gives birth to his son—Mordred.

Book III, The Ill-Made Knight, tells the story of Lancelot. Lancelot is a boy when he first meets Arthur and decides he will become Arthur's greatest knight, although he suffers from internal conflicts about his unworthiness. Later, as a young knight at Arthur's court, Lancelot and Queen Guenever (Arthur's wife) fall in love. To escape his feelings for Guenever, Lancelot sets off on a series of quests that end in him being seduced by a young girl named Elaine. Returning to Camelot, Lancelot and Guenever begin an affair, although this abruptly ends when Elaine turns up carrying Lancelot's son. Lancelot is driven mad by Guenever's rage and wanders around England as a wild, mad man for a number of years.

Eventually, years later, Elaine recognizes Lancelot in a mad man upon the streets. He returns to Camelot, but finds that Arthur's Order has begun to unravel. The knights, because they have solved most of the injustice with their violence, have begun to turn on each other. Arthur resolves to send his knights off on a Quest for the Holy Grail to make them moral men.

Three knights—Sir Bors, Sir Percival and Sir Galahad (Lancelot's son by Elaine)—eventually find the Grail but are too perfected by their endeavor and never return. Lancelot returns, a holy and converted man and refuses to begin his relationship with Guenever again. However, after she is kidnapped and Lancelot rescues her, defending her honor, they quickly begin their relationship once more.

In Book IV, The Candle in the Wind, Arthur's Order is truly broken. Agravaine and Arthur's son Mordred, fueled by hatred, set out to bring down Arthur's reign. They decide to use Arthur's new laws—to use a jury and proof to prove guilt, rather than trial by combat—to reveal Lancelot and Guenever's relationship. This they do and Guenever is almost executed, but rescued by Lancelot at the last moment. However, in rescuing Guenever, Lancelot kills two of the Orkney brothers (Gareth and Gaheris) who were unarmed.

On the urging of Mordred and Gawaine, Arthur lays siege to Lancelot's castle. The lovers ask the Pope for pardon and are granted it—however, Lancelot is banished to France. Arthur and Gawaine follow Lancelot to France where they lay siege to him once more because Gawaine must avenge the deaths of his brothers. While they are away in France, Mordred falsely announces that the King is dead and announces himself as King. He also tries to force Guenever to marry him, but she barricades herself in the Tower of London. Arthur returns to England and Gawaine forgives Lancelot so that he can aid Arthur. The novel closes on the eve of the final battle against Mordred. Arthur knows that he will die in battle, but that Mordred will be defeated and his legacy of justice over violence will live on. 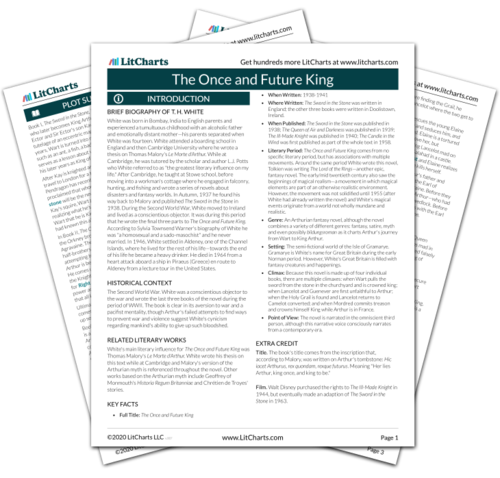 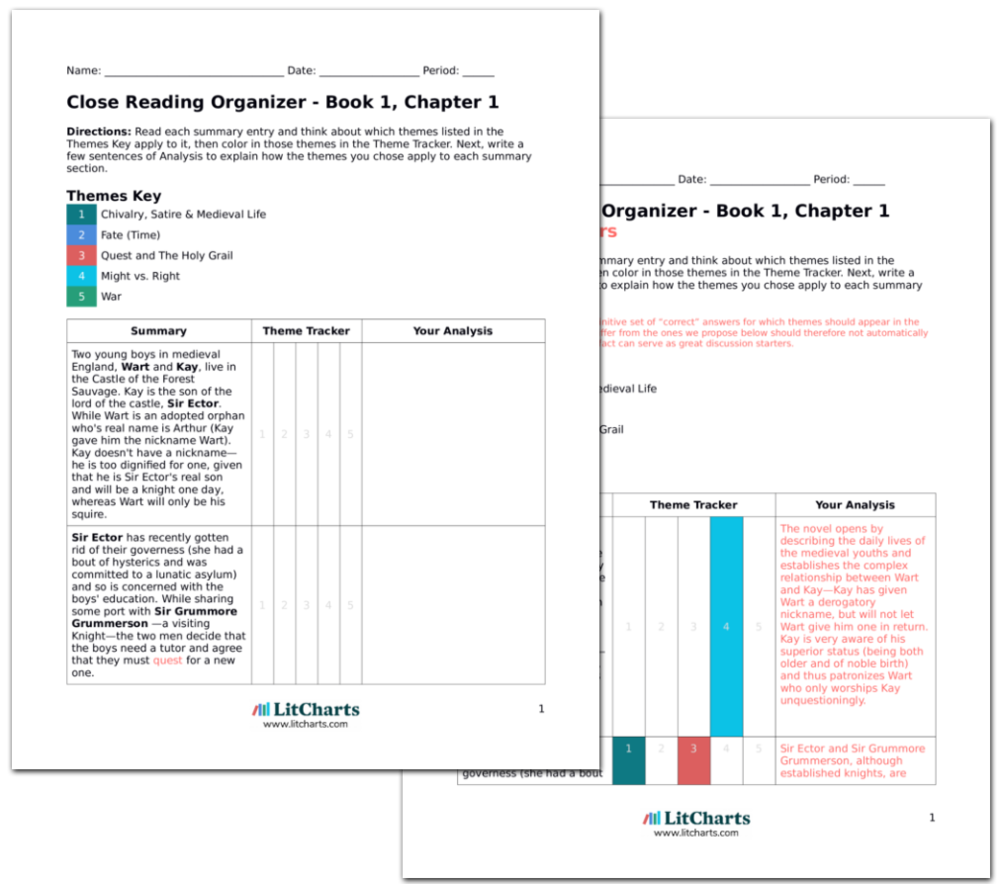