Welcome to the LitCharts study guide on Joseph Boyden's Three Day Road. Created by the original team behind SparkNotes, LitCharts are the world's best literature guides.

A concise biography of Joseph Boyden plus historical and literary context for Three Day Road.

A quick-reference summary: Three Day Road on a single page.

In-depth summary and analysis of every chapter of Three Day Road. Visual theme-tracking, too.

Explanations of Three Day Road's symbols, and tracking of where they appear.

Joseph Boyden was born the ninth of eleven children to Blanche Gosling and Raymond Boyden, a highly decorated medical officer from World War II. Boyden grew up outside Toronto, Canada, and went to Brebeuf College School, a Catholic all-boys academy in Toronto. He attended York University in Ontario, where he studied Humanities, and later earned a Master of Fine Arts degree at the University of New Orleans in Louisiana in 1995. Boyden worked as a professor in the Aboriginal Student Program at Northern College in Ontario and taught at the University of New Orleans and the University of British Columbia. In 2006, he published his first novel, Three Day Road, to popular and critical acclaim and wrote his second novel, Through the Black Spruce, in 2008. Most of Boyden’s writing focuses on First Nations culture and people, and Boyden himself claims to be of Métis heritage, meaning he is of mixed Indigenous and Euro-American ancestry. Boyden received the McNally Robinson Aboriginal Book of the Year Award in 2005 for Three Day Road, an honor that is bestowed upon Indigenous Canadian writers and includes a $5,000 prize. He became embroiled in controversy in 2016 when a national news outlet claimed no Indigenous ancestors could be found in Boyden’s family tree, which is mostly Scottish and Irish. Several Indigenous writers and activists spoke out against Boyden and his seemingly false claims to First Nations heritage, especially considering his acceptance of the McNally Robinson Award, an honor reserved for Indigenous writers only. Boyden maintains his Métis heritage and claims to be of mixed Ojibway and Nipmuc blood. He keeps homes in both Louisiana and Ontario, where he lives with his wife and fellow writer, Amanda Boyden.
Get the entire Three Day Road LitChart as a printable PDF.
"My students can't get enough of your charts and their results have gone through the roof." -Graham S.
Download it! 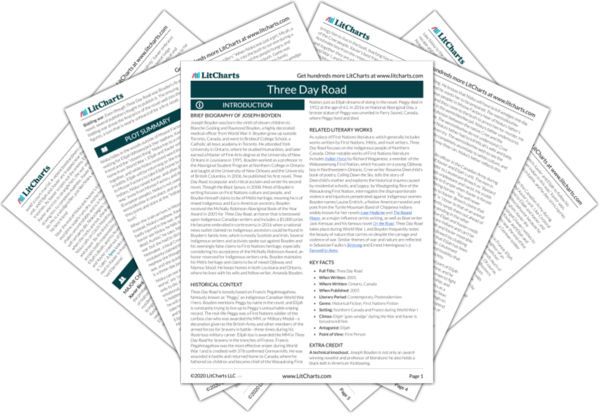 Three Day Road is loosely based on Francis Pegahmagahow, famously known as “Peggy,” an indigenous Canadian World War I hero. Boyden mentions Peggy by name in the novel, and Elijah is constantly trying to live up to Peggy’s untouchable sniping record. The real-life Peggy was a First Nations soldier of the caribou clan who was awarded the MM, or Military Medal—a decoration given to the British Army and other members of the armed forces for bravery in battle—three times during his illustrious military career. Elijah too is awarded the MM in Three Day Road for bravery in the trenches of France. Francis Pegahmagahow was the most effective sniper during World War I and is credited with 378 confirmed German kills. He was wounded in battle and returned home to Canada, where he fathered six children and became chief of the Wasauksing First Nation, just as Elijah dreams of doing in the novel. Peggy died in 1952 at the age of 61. In 2016 on National Aboriginal Day, a bronze statue of Peggy was unveiled in Parry Sound, Canada, where Peggy lived and died.

As a piece of First Nations literature, which generally includes works written by First Nations, Métis, and Inuit writers, Three Day Road focuses on the Indigenous people of Northern Canada. Other notable works of First Nations literature includes Indian Horse by Richard Wagamese, a member of the Wabaseemong First Nation, which focuses on a young Ojibway boy in Northwestern Ontario. Cree writer Rosanna Deerchild’s book of poetry, Calling Down the Sky, tells the story of Deerchild’s mother and explores the historical trauma caused by residential schools, and Legacy, by Waubgeshig Rice of the Wasauksing First Nation, interrogates the disproportionate violence and injustices perpetrated against Indigenous women. Boyden names Louise Erdrich, a Native American novelist and poet from the Turtle Mountain Band of Chippewa Indians widely known for her novels Love Medicine and The Round House, as a major influence on his writing, as well as Beat writer Jack Kerouac and his famous novel On the Road. Three Day Road takes place during World War I, and Boyden frequently notes the beauty of nature that carries on despite the carnage and violence of war. Similar themes of war and nature are reflected in Sebastian Faulks’s Birdsong and Ernest Hemingway’s A Farewell to Arms.
Key Facts about Three Day Road

A technical knockout. Joseph Boyden is not only an award-winning novelist and professor of literature; he also holds a black belt in American Kickboxing.

Bidding war. Even though Three Day Road was Boyden’s first novel, several publishers fought to publish it. The ensuing bidding war drove the final price of the novel well into the six figures, a sum that is nearly unheard of for a first novel. 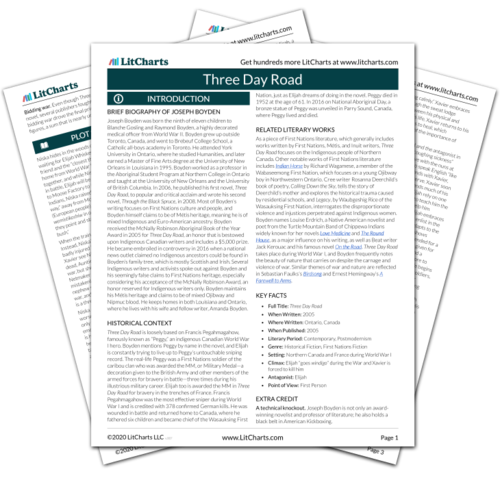 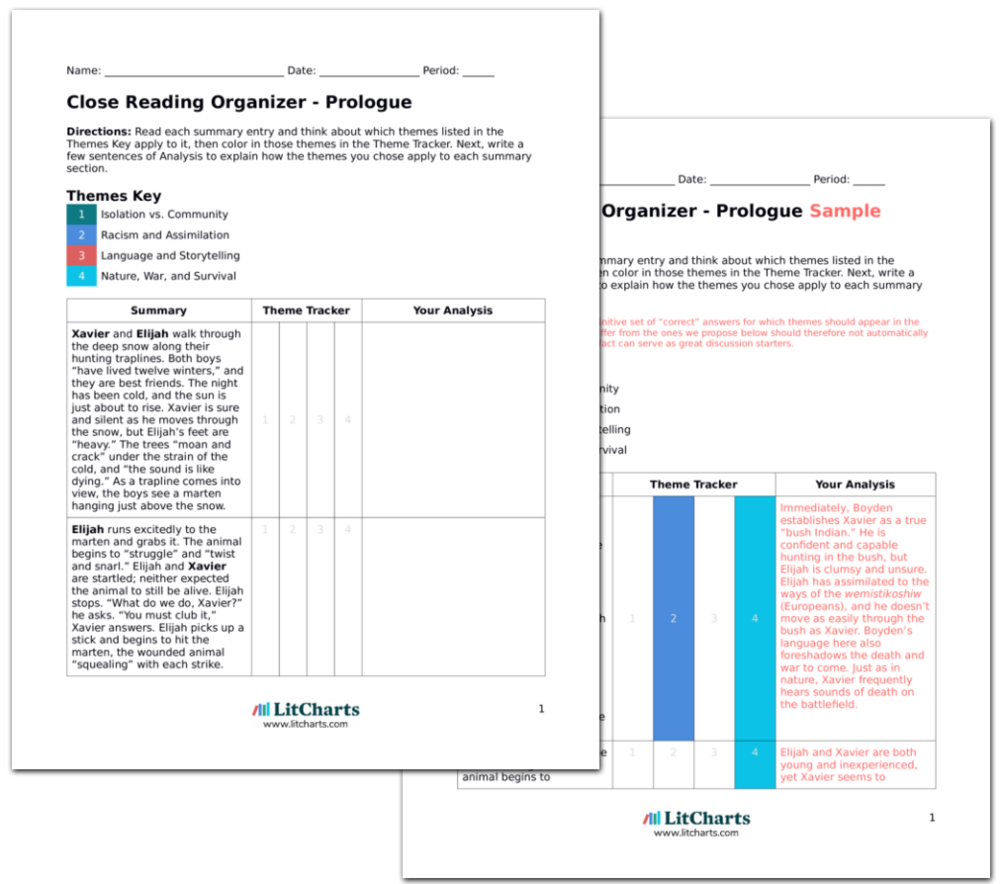