Download this LitChart! (PDF)
Teachers and parents! Struggling with distance learning? Our Teacher Edition on The Man Who Was Thursday can help.

Welcome to the LitCharts study guide on G. K. Chesterton's The Man Who Was Thursday. Created by the original team behind SparkNotes, LitCharts are the world's best literature guides.

The Man Who Was Thursday: Introduction

A concise biography of G. K. Chesterton plus historical and literary context for The Man Who Was Thursday.

The Man Who Was Thursday: Plot Summary

A quick-reference summary: The Man Who Was Thursday on a single page.

The Man Who Was Thursday: Detailed Summary & Analysis

In-depth summary and analysis of every chapter of The Man Who Was Thursday. Visual theme-tracking, too.

The Man Who Was Thursday: Themes

Explanations, analysis, and visualizations of The Man Who Was Thursday's themes.

The Man Who Was Thursday: Quotes

The Man Who Was Thursday's important quotes, sortable by theme, character, or chapter.

The Man Who Was Thursday: Characters

Description, analysis, and timelines for The Man Who Was Thursday's characters.

Description, analysis, and timelines for The Man Who Was Thursday's terms.

The Man Who Was Thursday: Symbols

Explanations of The Man Who Was Thursday's symbols, and tracking of where they appear.

The Man Who Was Thursday: Theme Wheel

An interactive data visualization of The Man Who Was Thursday's plot and themes.

G. K. Chesterton was born and raised in London, where he went to elite private schools and then attended University College London to study art. However, after realizing that he far preferred literature, he dropped out and began working in publishing and journalism. In 1901, he married Francis Blogg, who was a major influence on his religiosity later in life. He began writing a weekly newspaper column the next year—and continued for the rest of his life. But he first rose to literary prominence for his 1904 novel The Napoleon of Notting Hill and his landmark study of Charles Dickens’s work in 1906. Two more of his most significant books, The Man Who Was Thursday and Orthodoxy, followed in 1908 and 1909, and he began writing his famous Father Brown stories in 1910. Over the next three decades, Chesterton was a widely known, well-respected, and famously eccentric mainstay in British literary circles. In addition to his journalism and fiction, he wrote extensively on politics and religion. Politically, he favored a theory called distributism—or broadly redistributing land and resources—which he viewed as a middle ground between socialism and capitalism. Anti-Semitic views also surface in some of his writings. While he grew up with only irregular exposure to religion, he became a devout Anglican during his marriage and then converted to Catholicism in 1922. Many of his late writings focused on explaining and justifying Christian doctrine. Chesterton’s religious and political work deeply influenced thinkers as varied as C.S. Lewis, Jorge Luis Borges, and Mahatma Gandhi. Above all, Chesterton was famous for his chronic absentmindedness, wide circle of friends, frequent involvement in public debates, and enormous stature—he was 6’4” tall and weighed nearly 300 pounds. He died of a heart attack at his Buckinghamshire estate in 1936.
Get the entire The Man Who Was Thursday LitChart as a printable PDF.
"My students can't get enough of your charts and their results have gone through the roof." -Graham S.
Download 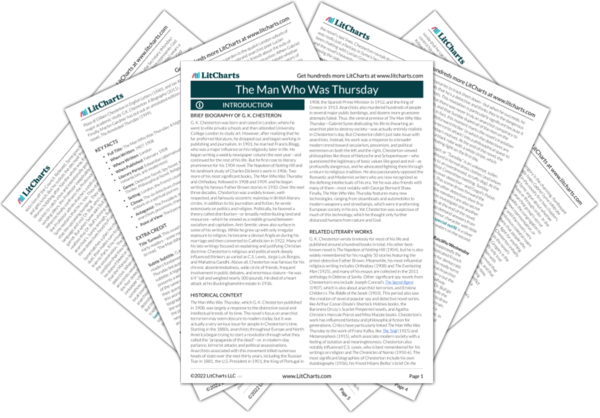 Historical Context of The Man Who Was Thursday

The Man Who Was Thursday, which G. K. Chesterton published in 1908, was largely a response to the distinctive social and intellectual trends of its time. The novel’s focus on anarchist terrorism may seem obscure to readers today, but it was actually a very serious issue for people in Chesterton’s time. Starting in the 1880s, anarchists throughout Europe and North America began trying to start a revolution through what they called the “propaganda of the deed”—or, in modern-day parlance, terrorist attacks and political assassinations. Anarchists associated with this movement killed numerous heads of state over the next thirty years, including the Russian Tsar in 1881, the U.S. President in 1901, the King of Portugal in 1908, the Spanish Prime Minister in 1912, and the King of Greece in 1913. Anarchists also murdered hundreds of people in several major public bombings, and dozens more gruesome attempts failed. Thus, the central premise of The Man Who Was Thursday—Gabriel Syme dedicating his life to thwarting an anarchist plot to destroy society—was actually entirely realistic in Chesterton’s day. But Chesterton didn’t just take issue with anarchists. Instead, his work was a response to a broader modern trend toward secularism, pessimism, and political extremism on both the left and the right. Chesterton viewed philosophies like those of Nietzsche and Schopenhauer—who questioned the legitimacy of basic values like good and evil—as profoundly dangerous, and he advocated fighting them through a return to religious tradition. He also passionately opposed the Romantic and Modernist writers who are now recognized as the defining intellectuals of his era. Yet he was also friends with many of them—most notably with George Bernard Shaw. Finally, The Man Who Was Thursday features many new technologies, ranging from steamboats and automobiles to modern weaponry and streetlamps, which were transforming European society in his era. Yet Chesterton was suspicious of much of this technology, which he thought only further distanced humans from nature and God.

Other Books Related to The Man Who Was Thursday

G. K. Chesterton wrote tirelessly for most of his life and published around a hundred books in total. His other best-known novel is The Napoleon of Notting Hill (1904), but he is also widely remembered for his roughly 50 stories featuring the priest-detective Father Brown. Meanwhile, his most influential religious writing includes Orthodoxy (1908) and The Everlasting Man (1925), and many of his essays are collected in the 2011 anthology In Defense of Sanity. Other significant spy novels from Chesterton’s era include Joseph Conrad’s The Secret Agent (1907), which is also about anarchist terrorism, and Erskine Childers’s The Riddle of the Sands (1903). This period also saw the creation of several popular spy and detective novel series, like Arthur Conan Doyle’s Sherlock Holmes books, the Baroness Orczy’s Scarlet Pimpernel novels, and Agatha Christie’s Hercule Poirot and Miss Marple books. Chesterton’s work has influenced fantasy and philosophical fiction for generations. Critics have particularly linked The Man Who Was Thursday to the work of Franz Kafka, like The Trial (1925) and Metamorphosis (1915), which associate modern society with a feeling of isolation and meaninglessness. Chesterton also notably influenced C.S. Lewis, who is best remembered for his writings on religion and The Chronicles of Narnia (1950-6). The most significant biographies of Chesterton include his own Autobiography (1936), his friend Hilaire Belloc’s brief On the Place of Gilbert Chesterton in English Letters (1940), and Ian Ker’s major academic study G.K. Chesterton: A Biography (2011). Finally, Martin Gardner has put out an annotated edition of this novel, The Annotated Thursday (1999).
Key Facts about The Man Who Was Thursday

Extra Credit for The Man Who Was Thursday

Title Turmoil. This novel’s unusual title confused many of its early readers—some reportedly assumed that it was supposed to read, “The Man Who Was Thirsty.”

Subtle Subtitle. G.K. Chesterton argued that most of his readers fundamentally misinterpreted The Man Who Was Thursday because they didn’t pay enough attention to its subtitle: A Nightmare. At the end of the novel, Chesterton presents a worldview in which good and evil are just two sides of the same coin, and people exhaust themselves and give up in their quest for meaning. Many readers thought he believed in this worldview, but actually, as he later explained in his biography, the novel “was meant to begin with the picture of the world at its worst and to work towards the suggestion that the picture was not so black as it was already painted.” Many newer editions of the novel include Chesterton’s explanation as an appendix in order to clarify this point. 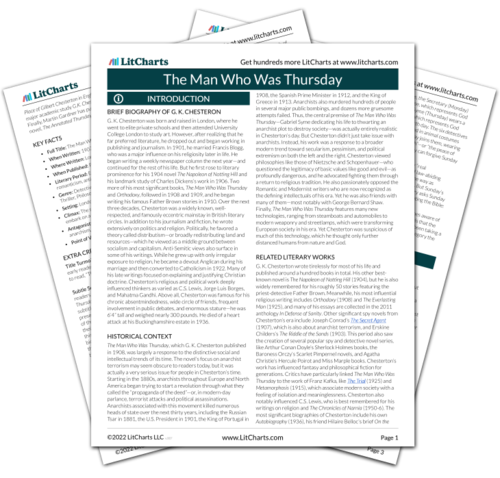 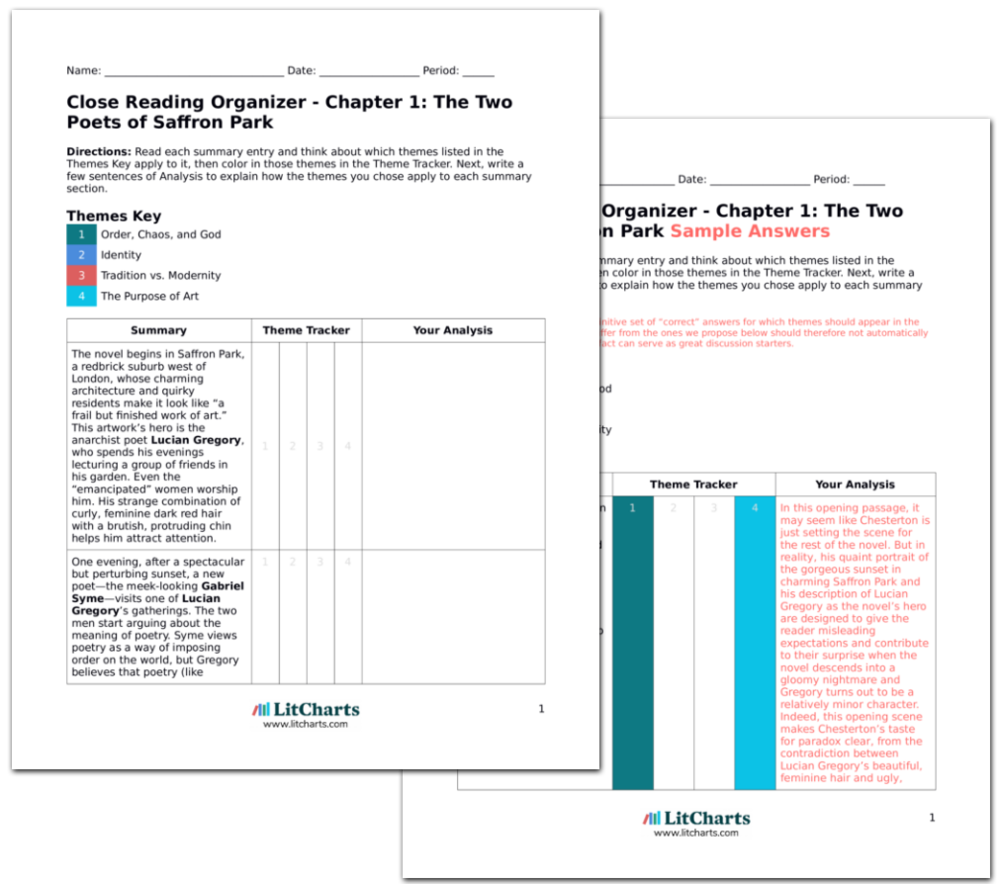