Download this LitChart! (PDF)
Teachers and parents! Struggling with distance learning? Our Teacher Edition on Genesis can help.

Welcome to the LitCharts study guide on Anonymous's Genesis. Created by the original team behind SparkNotes, LitCharts are the world's best literature guides.

A concise biography of Anonymous plus historical and literary context for Genesis.

A quick-reference summary: Genesis on a single page.

In-depth summary and analysis of every chapter of Genesis. Visual theme-tracking, too.

Explanations of Genesis's symbols, and tracking of where they appear.

An interactive data visualization of Genesis's plot and themes.

Traditionally, Jewish and Christian readers have attributed the Book of Genesis to Moses. Moses led the Israelites out of slavery in Egypt as described in the books of Exodus, Leviticus, Numbers, and Deuteronomy. Deuteronomy begins, “The words that Moses spoke to all Israel,” and by late antiquity, Moses had come to be regarded as the writer of all of the first five books of the Bible, known as the Pentateuch. However, no author is identified within Genesis itself. By the early modern period, biblical scholars speculated that Genesis was composed from multiple source documents. This conjecture is primarily based on the use of different names for God—in some places Elohim, in others YHWH (Yahweh)—in different passages, as well as the duplication of some stories. By the late 19th century, this “Documentary Hypothesis” became the established scholarly view, identifying four authorial strands behind the books of the Pentateuch (the “Priestly” and “Jahwist” sources being especially prominent in Genesis). Though the particulars of this hypothesis have since been critiqued and revised, most mainstream academics still view Genesis as a composite book whose constituent layers were written in different eras. What’s clear about the writer (or writers) of Genesis from its content is that the author has historical concerns (seen through their focus on people’s genealogies, for example), literary concerns (the many elegantly composed stories throughout Genesis), and above all theological concerns (the book as a whole is intended to teach its audience about God and humanity’s relationship with God).
Get the entire Genesis LitChart as a printable PDF.
"My students can't get enough of your charts and their results have gone through the roof." -Graham S.
Download 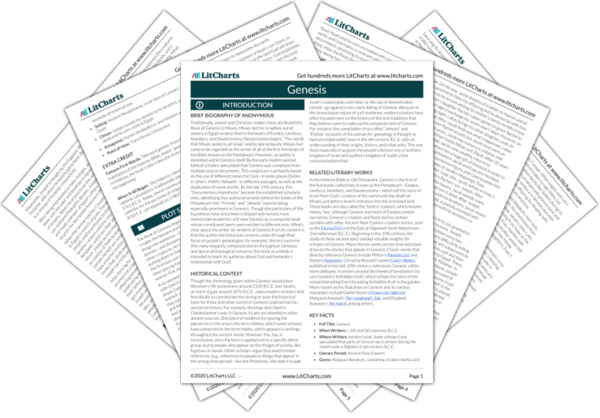 Though the chronology given within Genesis would place Abraham’s life somewhere around 2100 B.C.E. and Jacob’s arrival in Egypt around 1876 B.C.E., many modern scholars find few details to corroborate the timing or even the historical basis for these and other events in Genesis’s patriarchal (i.e., ancestral) history. For example, the kings described in Chedorlaomer’s war in Genesis 14 are not attested in other ancient sources. One piece of evidence for placing the patriarchs in this area is the term Hebrew, which some scholars have connected to the term Habiru, which appears in writings throughout the ancient world. However, this, too, is inconclusive, since the term is applied not to a specific ethnic group, but to people who appear on the fringes of society, like fugitives or slaves. Other scholars argue that anachronistic references (e.g., references to people in things that appear in the wrong time period)—like the Philistines, who didn’t invade Israel’s coastal plain until later, or the use of domesticated camels—go against a very early dating of Genesis. Because of the inconclusive nature of such evidence, modern scholars have often focused more on the history of the oral traditions that they believe came to make up the composite text of Genesis. For instance, the compilation of so-called “Jahwist” and “Elohist” accounts of the patriarchs’ genealogy is thought to have provided exiled Jews in the 6th century B.C.E. with an understanding of their origins, history, and tribal unity. This was likely especially true given the people’s division into a northern kingdom of Israel and southern kingdom of Judah a few centuries before that.

Other Books Related to Genesis

In the Hebrew Bible or Old Testament, Genesis is the first of the five books collectively known as the Pentateuch—Exodus, Leviticus, Numbers, and Deuteronomy—which tell the story of Israel from God’s creation of the world until the death of Moses, just before Israel’s entrance into the promised land. These books are also called the Torah in Judaism, which loosely means “law,” although Genesis and much of Exodus contain narratives. Genesis’s creation and flood stories contain parallels with other Ancient Near Eastern creation stories, such as the Enuma Elish and the Epic of Gilgamesh (both Babylonian, 2nd millennium B.C.E.). Beginning in the 19th century, the study of these ancient epics yielded valuable insights for scholars of Genesis. Many literary works across time and place draw on the stories that appear in Genesis. Classic works that directly reference Genesis include Milton’s Paradise Lost and Dante’s Purgatorio. Christina Rossetti’s poem Goblin Market, published in the mid-19th century, references Genesis a little more obliquely. It centers around the theme of temptation (its core symbol is forbidden fruit), which echoes the story of the serpent tempting Eve into eating forbidden fruit in the garden. More recent works that draw on Genesis and its various characters include Daniel Keyes’s Flowers for Algernon, Margaret Atwood’s The Handmaid’s Tale, and Elizabeth Acevedo’s The Poet X, among others.
Key Facts about Genesis

Famous First Words. The word genesis, from the Greek translation of the Hebrew Bible, means “generation” or “origin.” In Hebrew, the book’s title is Bereshit, from the first words, “In the beginning.”

When It All Began. The Hebrew calendar, based on medieval rabbinic calculations, traditionally dates Creation to the year 3761 B.C.E. Today, Jewish communities continue to use this calendar for the purposes of religious observance. The year 2020 C.E. corresponds to 5780/5781 on the Hebrew calendar. 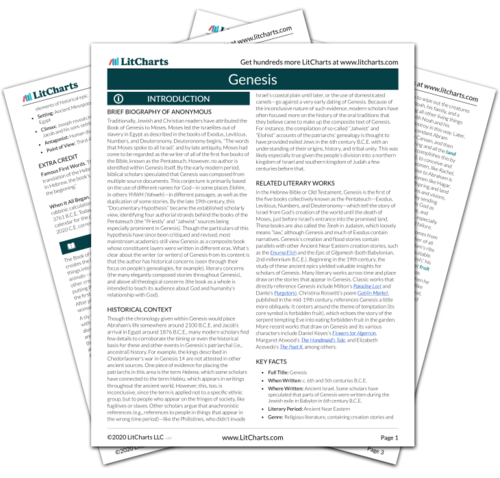 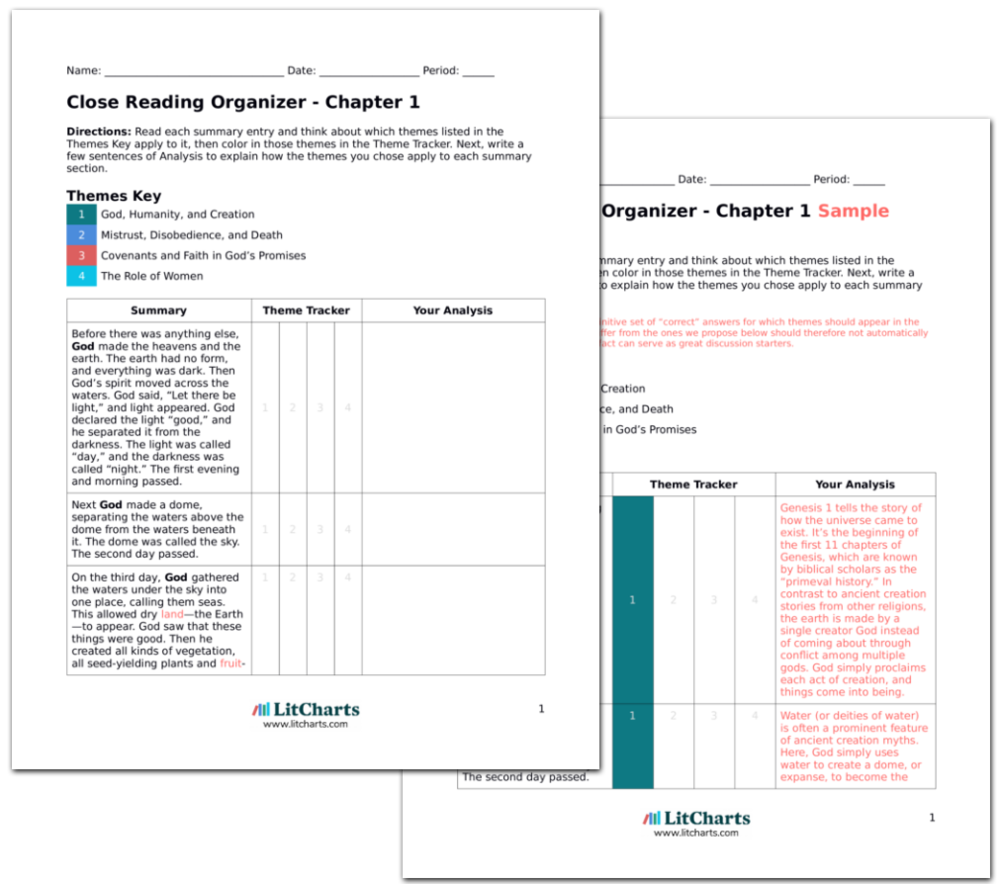