As Gifty plugs away at the experiments necessary for her doctoral thesis about the neurological pathways of addiction and depression, she receives word from Pastor John that her mother is experiencing another major depressive episode. Gifty asks Pastor John to put her mother on a plane to California so she can take care of her mother. As Gifty splits her time between taking care of her mother and working on her experiments, she reminisces about her childhood and considers the way religion and science have shaped her life.

Gifty’s mother wanted to give her first-born son, Nana, a better life, so she immigrated to America from Ghana when he was a baby. Soon after, Gifty’s father, the Chin Chin Man, followed them. Gifty herself was a surprise baby, born when her mother was 40. In America, Gifty’s mother worked as a home health aide. By the time Gifty was born, her father was working as a school janitor and was the primary parent for the children while their mother worked the night shift. But when Gifty was still a preschooler, the Chin Chin Man went back to Ghana for a visit and never returned.

Soon after coming to Alabama, Gifty's mother joined the Pentecostal First Assemblies of God Church, a primarily white church, since she didn’t yet know enough about America to realize that churches there have either Black or white congregations. Gifty was raised in this church; as a child she accepted its teachings without question. She had her come-to-Jesus moment there in middle school.

After their father left, Nana became Gifty’s primary caretaker. Gifty adored and looked up to her big brother, who made sure that she was well fed, taken care of, and loved. Gifty was a serious, religiously minded, and rules-oriented child; she aspired to be a preacher’s wife or a movie star when she grew up. Nana was a gifted athlete who played soccer from a young age. But soccer was the Chin Chin Man’s favorite game, and Nana stopped playing after he left. Eventually, he joined the high school basketball team, where he instantly became a star player. But, after being prescribed OxyContin for some torn ligaments, he became addicted to opioids. Gifty became Nana’s caretaker during the years he was addicted, and he died of an accidental overdose while still in high school. At his funeral, Gifty lost her faith in God.

After Nana’s death, Gifty’s mother fell into a deep depression. Eleven-year-old Gifty initially attempted to nurse her mother through it on her own. But when her mother attempted suicide and was involuntarily committed, Gifty was sent to Ghana to stay with her Aunt Joyce while her mother recovered. It was her mother’s and brother’s experiences with addiction and depression that inspired Gifty to study science in college at Harvard and pursue her doctoral degree in neuroscience at Stanford. She studies reward-seeking behaviors in mice, hoping to find a way to interfere with addiction through optogenetics (using light to influence a neural pathway).

Back in the present, while Gifty obsesses over her research experiments, she cares for her mother and tries to avoid intimacy with her colleague Katherine and her lab-mate Han. Her early experiences in her family and church, as well as with a college friend Anne and a serious boyfriend named Raymond, have made her suspicious of friendship and intimacy. She is unwilling to share her personal history, talk much about her mother’s current illness, or ask for help. Nevertheless, Han invites Gifty to parties, and after she accidentally blurts out some of the truth to Katherine, Katherine makes a point of being kind and caring towards Gifty. Katherine often brings her baked goods and offers her support.

Just as Gifty’s experimental research is reaching its conclusion and she thinks that her life is back on track, she returns to her apartment to find her mother missing. Fearing her mother might attempt suicide again, Gifty calls Katherine in a panic, admits that she isn’t okay, and asks for help. The two women soon find Gifty’s mother sitting by the side of the road. After she brings her mother home, Gifty bathes her mother gently. Her mother looks into Gifty eyes and tells her that there’s nowhere she could go where God isn’t with her; Gifty shouldn’t worry about her. After her mother falls asleep, Gifty leaves the apartment and drives around the city, feeling for the first time since she was five that she no longer needs to take care of her family members after a lifetime of caring for Nana and her mother.

In an epilogue that takes place sometime later, Gifty has finished her graduate work and has a career as a research neuroscientist with a lab at Princeton University. She and Han are a couple. And she has resolved, at least to her satisfaction, her desire for the “transcendent,” which she finds in the world—and people—around her. Yet, she still clings to the memory of her religious upbringing. Gifty often sits in the sanctuary of the local Episcopal Church, where she looks at the image of Christ on the cross, thinks about her past, and tries to make sense of her life. 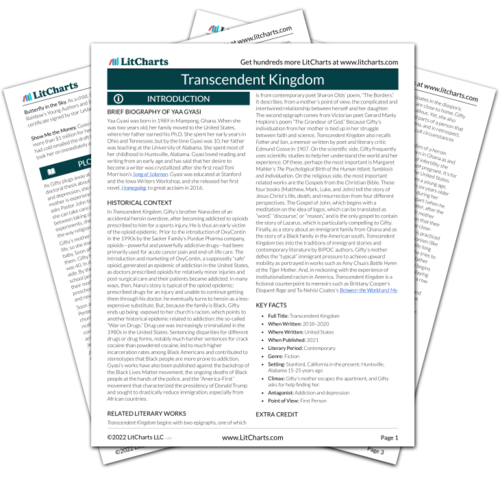 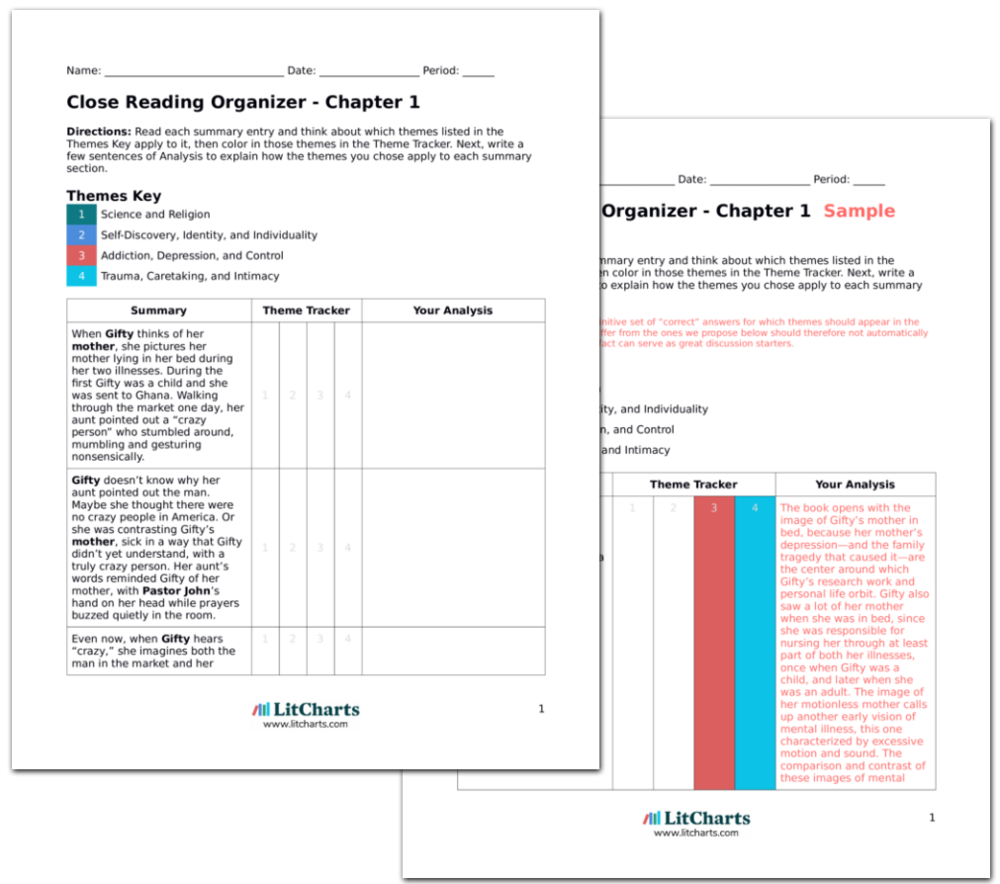