Download this LitChart! (PDF)
Teachers and parents! Struggling with distance learning? Our Teacher Edition on Emma can help.

Welcome to the LitCharts study guide on Jane Austen's Emma. Created by the original team behind SparkNotes, LitCharts are the world's best literature guides.

A concise biography of Jane Austen plus historical and literary context for Emma.

A quick-reference summary: Emma on a single page.

In-depth summary and analysis of every chapter of Emma. Visual theme-tracking, too.

Explanations of Emma's symbols, and tracking of where they appear.

An interactive data visualization of Emma's plot and themes.

Jane Austen was the seventh child of the parish rector in the town of Steventon, where she and her family resided until moving to Bath in 1801. Though her parents were members of the English gentry, they remained relatively poor. Modest to a fault about the value of her work, Jane Austen nevertheless produced some of the enduring masterpieces of English literature, including the novels Pride and Prejudice, Sense and Sensibility, Emma, and Persuasion. Her novels were published anonymously until after her death, when her authorship became known. While it was not unheard of for women to publish under their own names in Austen's lifetime, it was still a rarity. Despite the fact that her books focus on the intricate rituals of courtship and marriage among the British middle class, Austen herself remained single throughout her life, preferring the life of a writer over that of a wife and hostess.
Get the entire Emma LitChart as a printable PDF.
"My students can't get enough of your charts and their results have gone through the roof." -Graham S.
Download 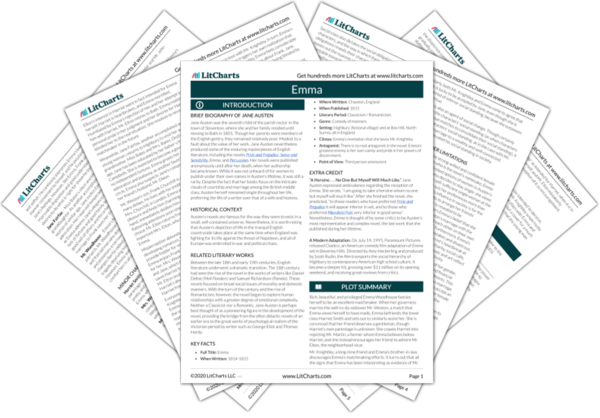 Austen's novels are famous for the way they seem to exist in a small, self-contained universe. Nevertheless, it is worth noting that Austen's depiction of life in the tranquil English countryside takes place at the same time when England was fighting for its life against the threat of Napoleon, and all of Europe was embroiled in war and political chaos.

Other Books Related to Emma

Between the late 18th and early 19th centuries, English literature underwent a dramatic transition. The 18th century had seen the rise of the novel in the works of writers like Daniel Defoe (Moll Flanders) and Samuel Richardson (Pamela). These novels focused on broad social issues of morality and domestic manners. With the turn of the century and the rise of Romanticism, however, the novel began to explore human relationships with a greater degree of emotional complexity. Neither a Classicist nor a Romantic, Jane Austen is perhaps best thought of as a pioneering figure in the development of the novel, providing the bridge from the often didactic novels of an earlier era to the great works of psychological realism of the Victorian period by writer such as George Eliot and Thomas Hardy.
Key Facts about Emma

“A Heroine . . . No One But Myself Will Much Like.” Jane Austen expressed ambivalence regarding the reception of Emma. She wrote, “I am going to take a heroine whom no one but myself will much like.” After she finished the novel, she predicted, “to those readers who have preferred Pride and Prejudice it will appear inferior in wit, and to those who preferred Mansfield Park very inferior in good sense.” Nonetheless, Emma is thought of by some critics to be Austen’s most representative and complex novel, the last work that she published during her lifetime.

A Modern Adaptation. On July 19, 1995, Paramount Pictures released Clueless, an American comedy film adaptation of Emma set in Beverley Hills. Directed by Amy Heckerling and produced by Scott Rudin, the film transports the social hierarchy of Highbury to contemporary American high school culture. It became a sleeper hit, grossing over $11 million on its opening weekend, and receiving great reviews from critics.