Welcome to the LitCharts study guide on Ben Jonson's Every Man in His Humour. Created by the original team behind SparkNotes, LitCharts are the world's best literature guides.

Every Man in His Humour: Introduction

A concise biography of Ben Jonson plus historical and literary context for Every Man in His Humour.

Every Man in His Humour: Plot Summary

A quick-reference summary: Every Man in His Humour on a single page.

Every Man in His Humour: Detailed Summary & Analysis

In-depth summary and analysis of every act of Every Man in His Humour. Visual theme-tracking, too.

Every Man in His Humour: Themes

Explanations, analysis, and visualizations of Every Man in His Humour's themes.

Every Man in His Humour: Quotes

Every Man in His Humour's important quotes, sortable by theme, character, or act.

Every Man in His Humour: Characters

Description, analysis, and timelines for Every Man in His Humour's characters.

Description, analysis, and timelines for Every Man in His Humour's terms.

Every Man in His Humour: Symbols

Explanations of Every Man in His Humour's symbols, and tracking of where they appear.

Every Man in His Humour: Theme Wheel

An interactive data visualization of Every Man in His Humour's plot and themes.

Ben Jonson was a prominent English playwright and poet, second only in reputation to William Shakespeare. His father died in 1572 two months before he was born; his mother soon remarried a master-bricklayer. Jonson received a good education at Westminster school, where he was under the influential tutelage of William Camden, to whom he later said he owed “all that I am in arts, all that I know.” In 1588, Jonson was denied his wish to attend Oxford University and was forced to make an abortive attempt at learning the bricklaying craft. Soon after, he took military service in the Low Countries (Netherlands, Belgium and Luxembourg). In 1594, he is thought to have married Anne Lewis. Soon after his return from military service, Jonson entered the world of theater, working as an actor and, before long, a playwright. In 1597, he was briefly imprisoned for the controversial The Isle of Dogs, of which no copy exists. In 1598, Every Man in his Humour, an attempt to apply the principles of Latin comedy to the English stage, was performed to great success by the Lord Chamberlain’s Man—Shakespeare’s company. The same year, Jonson was imprisoned for the manslaughter of Gabriel Spenser, escaping capital punishment on a religious technicality. From 1605, Jonson was held in high regard by the court of King James I, employed by the monarch to write regular masques, often in collaboration with the influential designer and architect, Inigo Jones. During Charles I’s reign, however, Jonson began to fall out of favor, and he was paid a regular pension largely out of deference to Charles’ father. One of Jonson’s disciples, Thomas Carew, even tried to get the famous writer to recognize his own decline. Jonson died in 1637, his funeral well-attended by the nobility of the time. He was buried in Westminster Abbey, close to where he had attended school as a young boy.
Get the entire Every Man in His Humour LitChart as a printable PDF.
"My students can't get enough of your charts and their results have gone through the roof." -Graham S.
Download 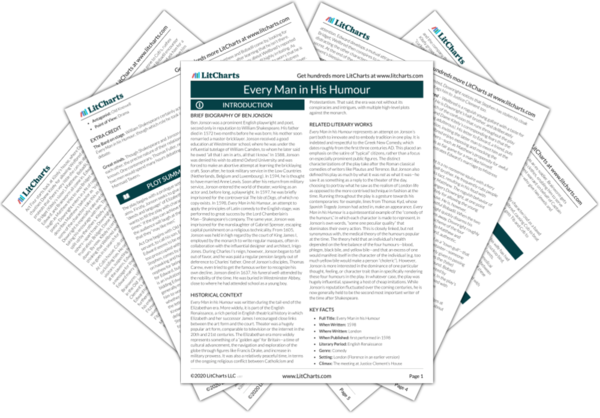 Historical Context of Every Man in His Humour

Every Man in his Humour was written during the tail-end of the Elizabethan era. More widely, it is part of the English Renaissance, a rich period in English theatrical history in which Elizabeth and her successor James I encouraged close links between the art form and the court. Theater was a hugely popular art form, comparable to television or the internet in the 20th and 21st centuries. The Elizabethan era more widely represents something of a “golden age” for Britain—a time of cultural advancement, the navigation and exploration of the globe through figures like Francis Drake, and increase in military prowess. It was also a relatively peaceful time, in terms of the ongoing religious conflict between Catholicism and Protestantism. That said, the era was not without its conspiracies and intrigues, with multiple high-level plots against the monarch.

Other Books Related to Every Man in His Humour

Every Man in his Humour represents an attempt on Jonson’s part both to innovate and to embody tradition in one play. It is indebted and respectful to the Greek New Comedy, which dates roughly from the first three centuries AD. This placed an emphasis on the satire of “typical” citizens, rather than a focus on especially prominent public figures. The distinct characterizations of the play take after the Roman classical comedies of writers like Plautus and Terence. But Jonson also defined his play as much by what it was not as what it was—he saw it as something as a reply to the theater of the day, choosing to portray what he saw as the realism of London life as opposed to the more contrived technique in fashion at the time. Running throughout the play is a gesture towards his contemporaries: for example, lines from Thomas Kyd, whose Spanish Tragedy Jonson had acted in, make an appearance. Every Man in his Humour is a quintessential example of the “comedy of the humours,” in which each character is made to represent, in Jonson’s own words, “some one peculiar quality” that dominates their every action. This is closely linked, but not synonymous with, the medical theory of the humours popular at the time. The theory held that an individual’s health depended on the fine balance of the four humours—blood, phlegm, black bile, and yellow bile—and that an excess of one would manifest itself in the character of the individual (e.g. too much yellow bile would make a person “choleric”). However, Jonson is more interested in the dominance of one particular thought, feeling, or character trait than in specifically rendering these four humours in the play. In whatever case, the play was hugely influential, spawning a host of cheap imitations. While Jonson’s reputation fluctuated over the coming centuries, he is now generally held to be the second most important writer of the time after Shakespeare.
Key Facts about Every Man in His Humour

Extra Credit for Every Man in His Humour

The Bard on stage. William Shakespeare certainly acted in Every Man in his Humour, though which role he took is up for debate.

Great minds. Though Shakespeare and Jonson definitely knew each other, the precise nature of their relationship is not known. One contemporary, Thomas Fuller, recorded that the two men would spend many hours debating in London’s Mermaid Tavern. 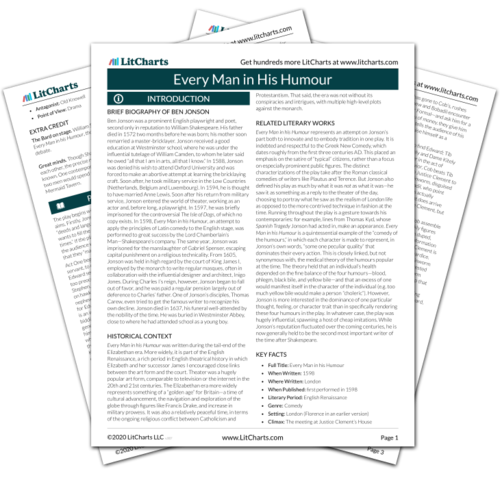 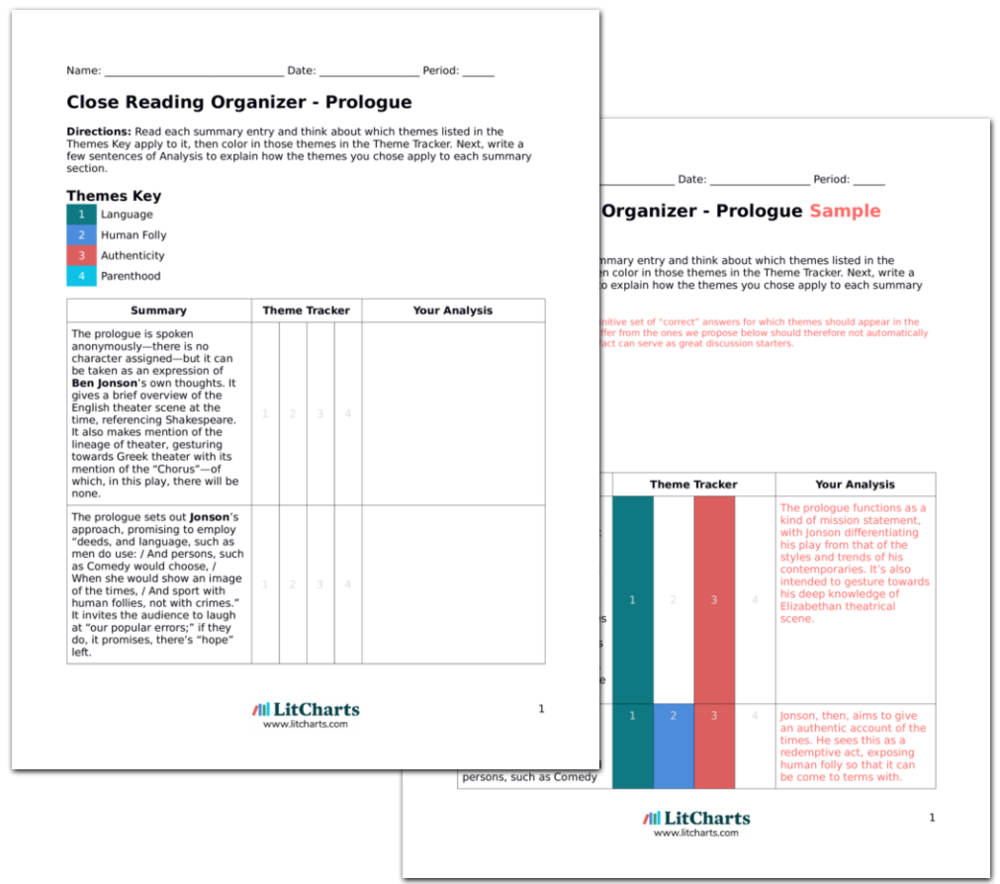