Tituba tells the story of her early life: her mother Abena is an Ashanti woman who was captured, enslaved, and taken to Barbados. While on the ship, Abena is assaulted by a white sailor, resulting in Tituba’s birth; Tituba is then raised by Abena and her lover, a gentle Ashanti man named Yao. When Tituba is 7, Darnell Davis, the owner of the plantation, assaults Abena, who uses a cutlass to defend herself. Darnell responds by publicly hanging Abena. Yao kills himself, and Tituba, traumatized, leaves the plantation.

Now an orphan, Tituba finds solace with Mama Yaya, a reclusive healer. Mama Yaya teaches Tituba how to use tropical plants, sacrifices, and incantations to cure illness and change others’ behavior. She also shows Tituba how to communicate with the dead. Though Mama Yaya dies when Tituba is 14, Tituba continues to seek guidance from her spirit (as well as the spirits of Abena and Yao). After Mama Yaya’s death, Tituba builds herself a small cabin on the edge of the plantation. She also begins to travel around the island, healing the sick as Mama Yaya once did.

A few months later, Tituba falls for John Indian, a charismatic man born to a Nago mother and an indigenous father. The spirits of Mama Yaya and Abena counsel Tituba against this attraction, because John has a reputation as a womanizer. Nevertheless, Tituba crosses the island to meet John Indian for a dance, and he affectionately calls her his “little witch.” The two become a couple, but John refuses to live with Tituba in her cabin. Instead, he insists she join him on the Endicott plantation, where he has been enslaved for his entire life. Though Tituba cannot believe herself, her love is intense enough to motivate her to willingly rejoin “the white man’s world.”

After a brief honeymoon period, in which Tituba and John have lots of passionate sex, Susanna Endicott (the plantation owner) shows her true colors. Susanna forces Tituba to clean for hours on end; she also forcibly tries to convert Tituba to Christianity, introducing her to the terrifying concept of Satan. Over time, Tituba’s resentment of Susanna grows, and finally, she poisons her. While Susanna slowly dies, she hints that Tituba is a witch—and then announces that she has sold both Tituba and John Indian to a man named Samuel Parris. Though Tituba protests that she was never Susanna’s property, it is too late; Parris plans to bring both Tituba and John with him to New England.

While on board the ship that will bring her to America, Tituba gets to know Samuel Parris’s sickly wife Elizabeth, bonding over their shared hatred of Parris. Tituba develops a fondness for Betsey, Elizabeth’s young daughter, though she distrusts Parris’s niece Abigail, a clever, manipulative teenager. When the family finally arrives in Boston, Elizabeth falls deathly ill. In a moment of quick thinking, Tituba finds New England herbs to substitute for the tropical plants she normally uses to heal—and she is able to bring Elizabeth back to health.

Tituba, John, and the Parris family spend the year in Boston while Parris, a minister, tries to find a parish that will hire him. John works in a tavern, where he notices the “hypocrisy” of the white Puritans. Meanwhile, Tituba meets a woman named Judah White, who knows Mama Yaya in the spirit world and who teaches Tituba how to use owls and black cats to conduct magic (because “nature changes her language according to the land”). During this time, Tituba gets pregnant, but not wanting to bring another child into slavery, she aborts the baby. Parris at last gets a job in the rural village of Salem, Massachusetts.

Once in Salem, Tituba is swarmed by Abigail and the other local teenaged girls. The girls beg Tituba to tell them stories about witchcraft, and they accuse specific women—poor Sarah Goode, pariah Sarah Osborne, and soft-spoken Elizabeth Proctor—of consorting with the devil. One day, Betsey begins to have seizures, and her parents worry that she is possessed. They immediately blame Tituba for Betsey’s plight.

All of the townspeople, including those whom Tituba had been friends with, label her a witch. Parris, along with some other ministers from nearby towns, torture Tituba and sexually assault her in an attempt to make her confess. Tituba refuses to admit to crimes she did not do—or to falsely name others—and so she is taken to jail. She is placed in a cell with Sarah Goode and Sarah Osborne, both of whom turn against her immediately. Tituba then is moved to a cell with a beautiful young woman named Hester, who has been imprisoned for adultery. Hester, an avowed “feminist,” helps Tituba prepare for her trial.

The first-person account is interrupted by Tituba’s real-life trial testimony, excerpted from the archival records. In her testimony, Tituba accuses Goode and Osborne, but nobody else. After the trial, Parris congratulates Tituba on a job well done, which horrifies her.

Tituba summarizes the rash of accusations that spreads across Salem and beyond. Some of the most respected people in the village are executed for witchcraft. To her dismay, Tituba learns that John Indian—determined to “survive” at any cost—has joined the ranks of the accusers.

Eventually, the chaos dies down, and Tituba is sold to a Jewish merchant named Benjamin Cohen d’Azevedo. Benjamin has recently lost his wife, and in addition to caring for his nine children, Tituba uses her powers to allow him to commune with his wife’s spirit. Eventually, Tituba and Benjamin become lovers—though Benjamin refuses to grant Tituba her legal freedom. One night, the villagers, consumed by anti-Semitism and anti-Blackness, burn the d’Azevedo home to the ground. Benjamin and Tituba survive, but all the children perish. Benjamin blames himself for this tragedy, and he frees Tituba out of remorse, giving her a ticket back to Barbados. On the ship, Tituba befriends Deodatus, an enslaved man who knew of her mother.

Upon arriving in Barbados, Tituba realizes that she no longer knows anyone on the island. Deodatus introduces her to a group of maroons (former slaves who have escaped into the hills). Christopher, the leader of the maroons, has heard that Tituba has magical powers, and he hopes she will make him “invincible.” The two become lovers. When Tituba tells Christopher that “death is a door nobody can lock,” he becomes cold and cruel; she leaves him and returns to her old cabin. Soon after, Tituba realizes she is pregnant. Around the same time, she begins caring for a young, enslaved man named Iphigene, who has been nearly beaten to death by a white overseer.

Wanting a better world for her child, Tituba and Iphigene plot a revolt—but before their plan can come to fruition, the white slaveholders execute them both. Tituba reflects that though very little is written about her in archival history, she lives on in the memories of those she helped to heal, and that her “song” can be heard in “the crackling of a fire between four stones, the rainbow-hued babbling of the river, and the sound of the wind.” 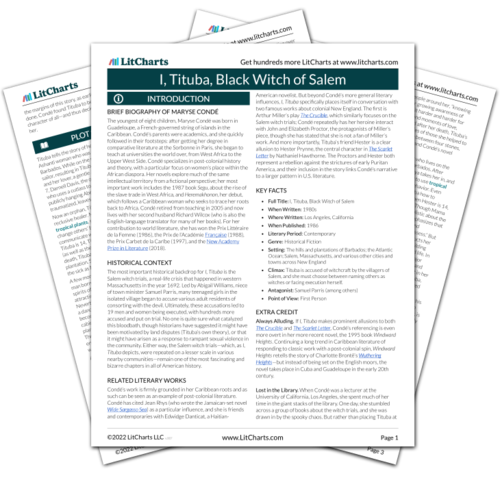 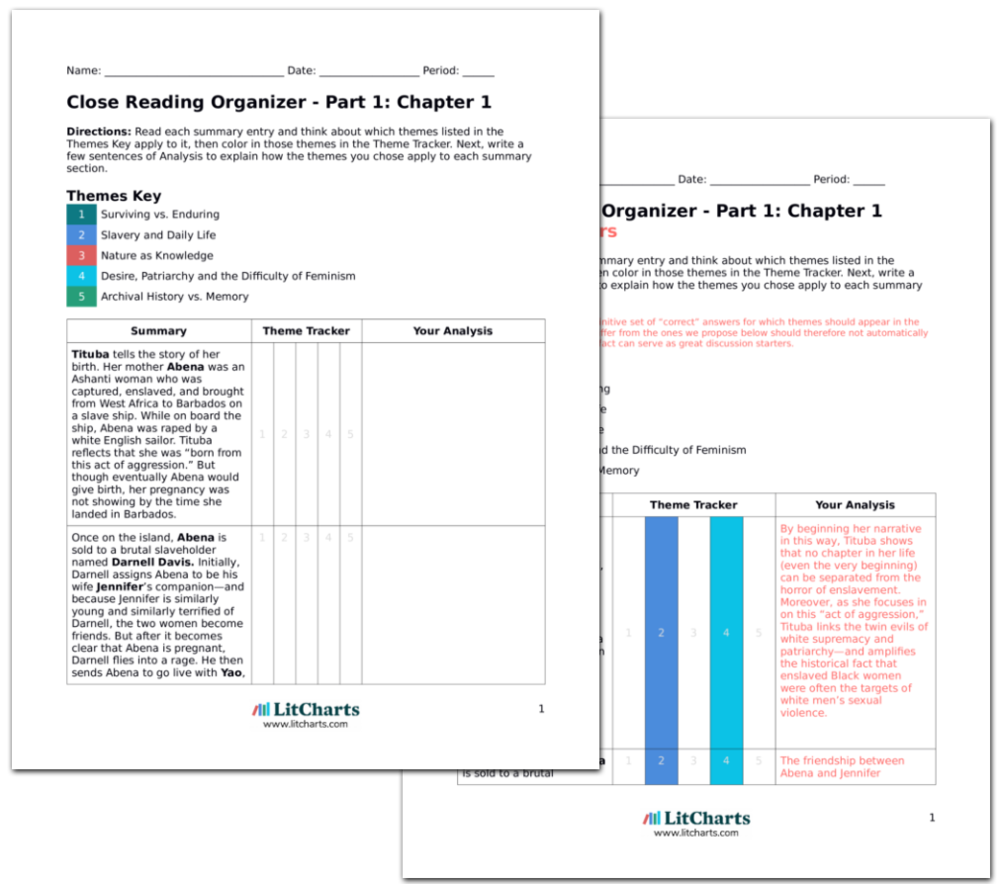