Thomas Hardy struggled with his own religious beliefs, and that struggle comes through in his work. He idealized the paganism of the past but was also attached to his family's Christianity, and generally he accepted some sort of supernatural being that controlled fate. Tess herself is usually portrayed as an embodiment of that pagan innocence, a sort of English Nature goddess. She first appears performing the fertility ritual of May-Day, then bedecked in flowers from Alec, whistling to Mrs. d'Urberville's birds, and mercifully killing the wounded pheasants. Angel describes her as a “new-sprung child of nature” and compares her to mythical women like Eve, Artemis, and Demeter. There is another side of Tess's “divinity” as well, however: the role of sacrificial victim, which is a figure associated with both paganism and Christianity. Like Jesus, Tess is punished for the sins of another, assuming the weight of guilt for Alec's crime. When the police finally come to arrest her for murder, she is lying asleep at Stonehenge like a sacrifice on an altar. Stonehenge was thought at Hardy's time to be a heathen temple.

The Christian end of the spectrum is particularly associated with the Clare family and Alec d'Urberville. Each character seems to have a different form and expression of faith, and Hardy critiques them all with empathy from his own religious wrestling. Most of his respect goes to the intense but charitable Mr. Clare, while Alec's conversion is depicted more as a product of his fickle thrill-seeking than any deep emotion, and the conformist Clare brothers are mocked for blindly following every fashionable doctrine. Angel's skepticism and Tess's vague beliefs take the most prominence, and neither moves much past Hardy's own state of doubt. 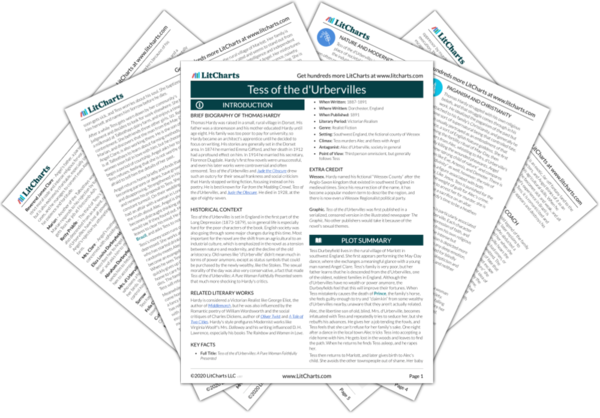 Paganism and Christianity Quotes in Tess of the d'Urbervilles

Below you will find the important quotes in Tess of the d'Urbervilles related to the theme of Paganism and Christianity.
Chapter 2 Quotes

The forests have departed, but some old customs of their shades remain. Many, however, linger only in a metamorphosed or disguised form. The May-Day dance, for instance, was to be discerned on the afternoon under notice, in the guise of the club revel, or “club-walking,” as it was there called.

She did not look like Sissy to them now, but as a being large, towering, and awful – a divine personage with whom they had nothing in common.

What a fresh and virginal daughter of Nature that milkmaid is!

“I don't quite feel easy,” she said to herself. “All this good fortune may be scourged out of me afterwards by a lot of ill. That's how Heaven mostly does.”

“O my love, why do I love you so!” she whispered there alone; “for she you love is not my real self, but one in my image; the one I might have been!”

Because nobody could love ‘ee more than Tess did! …She would have laid down her life for ‘ee. I could do no more.

Unlock with LitCharts A+
Chapter 45 Quotes

This was once a Holy Cross. Relics are not in my creed; but I fear you at moments – far more than you need fear me at present; and to lessen my fear, put your hand upon that stone hand, and swear that you will never tempt me – by your charms or ways.

Unlock with LitCharts A+
Chapter 47 Quotes

What a grand revenge you have taken! I saw you innocent, and I deceived you. Four years after, you find me a Christian enthusiast; you then work upon me, perhaps to my complete perdition!

Unlock with LitCharts A+
Chapter 58 Quotes

“It is as it should be,” she murmured. “Angel, I am almost glad – yes, glad! This happiness could not have lasted. It was too much. I have had enough; and now I shall not live for you to despise me!”

Unlock with LitCharts A+
Chapter 59 Quotes

“Justice” was done, and the President of the Immortals, in Aeschylean phrase, had ended his sport with Tess. And the d'Urberville knights and dames slept on in their tombs unknowing.