What is an anapest? Here’s a quick and simple definition:

Some additional key details about anapests:

Here's how to pronounce anapest: an-uh-pest

In order to understand anapests in more depth, it’s helpful to have a strong grasp of a few other literary terms about poetry. We cover each of these in depth on their own respective pages, but below is a quick overview to help make understanding anapests easier.

Accentual vs Quantitative Verse and Anapests

The term anapest takes on a different meaning depending on the type of verse in which it’s used: accentual verse or quantitative verse.

Anapests in Byron's "The Destruction of Sennacherib"

In this excerpt—the first stanza of Byron's poem "The Destruction of Sennacherib"—you can clearly see the unstressed-unstressed-stressed metrical pattern throughout. This poem is a famous example of anapestic meter, because every foot is an anapest and also because it is a poem about someone riding a galloping horse which mentions rolling waves, two things to which the rhythm of anapests are often compared.

The Assyrian came down like the wolf on the fold,

And his cohorts were gleaming in purple and gold;

And the sheen of their spears were like stars on the sea,

When the blue wave rolls nightly on deep Galilee.

Another example of a famous anapestic poem is Robert Browning's "How They Brought the Good News from Ghent to Aix." This poem, like the previous example, is also set on horseback. In the first stanza alone, the word "gallop" is used five times.

I sprang to the stirrup, and Joris, and he;
I galloped, Dirck galloped, we galloped all three;
‘Good speed!'’ cried the watch, as the gate-bolts undrew;
‘Speed!’ echoed the wall to us galloping through;
Behind shut the postern, the lights sank to rest,
And into the midnight we galloped abreast.

Notice that the lines do not begin with anapests, but rather iambs (a commonly-used metrical foot with two syllables, unstressed-stressed). This addition of non-anapests into anapestic verse is common, and is often used to lessen the singsongy (and sometimes tiresome) tone that using such a regular anapestic rhythm without variation can produce.

John Masefield's famous poem "Sea Fever" is a more complex example of anapestic verse. He intersperses anapests throughout the poem at irregular intervals, also sometimes making use of iambs (stressed-unstressed) and spondees (stressed-stressed). Here are two lines from the poem:

I must go down to the seas again, to the lonely sea and the sky
And all I ask is a tall ship and a star to steer her by...

Whereas anapests are often used to create a feeling of speed and regularity, here Masefield uses anapests irregularly to create an uneasy "seasick" feeling throughout the poem, mirroring the motion of a ship being tossed on the waves.

Anapests in Dr. Seuss's Horton Hears a Who!

Dr. Seuss wrote many of his children's books in anapestic tetrameter (a metrical form in which each line has four anapestic feet). Here, the beginning of Horton Hears a Who! gives a clear example of the form.

Notice how, to add variation to the rhythm, Seuss shifted the beginning of the fourth line so that it begins with an iamb rather than an anapest.

Anapests in Lear's "There was an Old Man with a Beard"

The poet Edward Lear is famous for his limericks—short, humorous poems consisting of five lines that make use of anapests to create a lighthearted, comedic effect. Limericks usually describe an eccentric figure and give a brief account of some misfortune that befalls them as a result of their eccentricity. This limerick is a well-known classic that follows the formula.

There was an Old Man with a beard,
Who said, "It is just as I feared!—
Two Owls and a Hen,
Four Larks and a Wren,
Have all built their nests in my beard.

Why Do Writers Use Anapests?

The galloping rhythm of anapests give poems a naturally jaunty and buoyant feeling that helps the words flow freely, making anapests an ideal metrical foot for lighthearted poems like limericks, children's stories, and jokes. In two of the most famous poems written in anapestic meter—Byron's "The Destruction of Sennacherib" and Browning's "How They Brought the Good News from Ghent to Aix"— the poets match the energetic rhythm of the anapest to their subject matter: both poems tell the stories of riders on horseback.

Compared with the heart-like beat of an iamb (da-dum da-dum), the anapest's unstressed-unstressed-stressed pattern (da-da-dum da-da-dum) accentuates the rhythmic quality of the foot by extending the duration between stresses, which in turn amplifies the emphasis on those stressed syllables. For example, the iambic line "To be, or not to be" has a generally heavier, more clock-like cadence than an anapestic line like "There was an Old Man with a beard." Further, the emphasis on the stressed "Man" and "beard" in the anapestic line is somewhat stronger than the emphasis on the stressed syllables of the iambic line. The result of this more pronounced rhythmic quality is that anapestic verse has a singsongy cadence that has been shown to help with understanding and memorization—another reason why writers like Dr. Seuss may have gravitated to the form.

While one benefit of the anapest's singsongy rhythm is that it can help make long, information-heavy poems or poems with complex plots much easier to listen to, the regularity of the rhythm can begin to feel abrasive or tedious if it isn't broken up. Writers often account for this by swapping-out an anapest for a different kind of foot to add variety to a stanza or line—as Seuss commonly does—or by using anapests more sparingly, as Robert Browning does in his famous poem "Sea Fever." 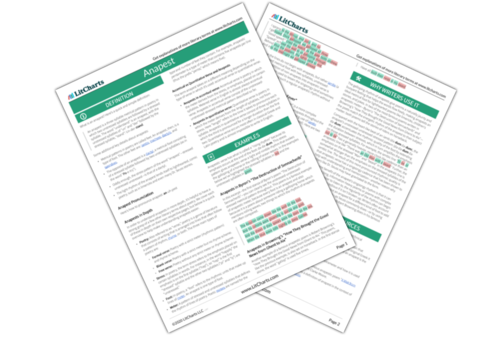