What is assonance? Here's a quick and simple definition:

Assonance is a figure of speech in which the same vowel sound repeats within a group of words. An example of assonance is: "Who gave Newt and Scooter the blue tuna? It was too soon!"

Some additional key details about assonance:

How to Pronounce Assonance

Here's how to pronounce assonance: ass-uh-nuhnce

Alliteration is another figure of speech that involves the repetition of sounds and is related to assonance. Assonance and alliteration differ in two key respects.

In practical terms, these rules mean that assonance can sometimes also be alliteration, but isn't always.

Assonance That Is Also Alliteration

Assonance That Is NOT Also Alliteration

In the example below, assonance is not also alliteration, because the repeating vowel sound almost never occurs on either the first or stressed syllables (only on "imp" does it do either):

Assonance also plays a role in rhyme. Rhyme is the repetition of identical sounds located at the ends of words. Rhymes can be either repeated consonant sounds or vowel sounds (or combinations of the two). A rhyme, then, can be assonant, but not all rhymes are assonant. Here's an example of assonance functioning as rhyme at the end of lines three and four of the limerick below:

Assonance also plays a noticeable role in slant rhyme, a type of rhyme formed by words with sounds that are similar but not identical. Slant rhymes often pair similar vowel sounds with dissimilar consonant sounds, which means that slant rhymes often contain assonance. In the example below from the song "N.Y. State of Mind" the rapper Nas uses assonance to create slant rhymes between the first syllable of "prosperous," the word "cops," and the first syllable of the word "hostages." In addition, the assonance of the "uh" sound in final syllables of "prosperous," "dangerous," and "could just" establishes the slant rhyme that ends with the slightly different vowel sound in "hostages."

And be prosperous, though we live dangerous
Cops could just arrest me, blamin’ us, we’re held like hostages

Assonance is common in all sorts of writing, including poetry and prose literature, as well as song lyrics.

In both poetry and prose, assonance's repetition of sound can give language a musical element, as well as emphasize sounds or words that particularly resonate with the ideas or themes of the work. When assonance is also alliterative, it can add rhythm to text, too.

Here, the long-i sound is assonant, and its repetition emphasizes how the sound itself seems to embody the feeling being described, that of longing and sighing—of emotional turmoil. Assonance is particularly useful for this kind of sonic demonstration of feeling.

Chris Martin's "Trajectory of a Thief"

This poem contains both assonance and alliteration. The "ee" sound in "each," "piece," and "meat" slows down that particular sequence, rendering especially vivid the eating of the turtle soup.

"Ted takes you to Chinatown for turtle
Soup, each piece of its floating meat
Wholly disparate ..."

Assonance in The Iliad

In these lines from Book XII of Lattimore's translation of Homer's Iliad the assonance helps reinforce the lulling effect of the winds' sleep:

Assonance in "The Seafarer"

The Seafarer is an Old English poem. In Old English poetry, rhyme was much less common, and assonance and consonance much more prevalent. In this translation of the poem by Ezra Pound, the assonance helps to emphasize the "harshness" described in the lines, through the repetition of the "-ar" sound.

Journey's jargon, how I in harsh days
Hardship endured oft.

In this example, the assonance reinforces the repetition of the surname Bon, which is itself the French word for "good," thus drawing a contrast between the continued presence of "goodness" and the "getting rid of" described.

In this example from the first chapter of Alice Walker's The Color Purple, the insistence of the repeated "i" sounds intensifies the staccato present in these lines and establishes the narrator's tone—a combination of fear, intense description, and melancholy remembrance.

She got sicker an sicker.
Finally she ast Where it is?
I say God took it.
He took it. He took it while I was sleeping. Kilt it out there in the woods. Kill this one too, if he can.

Assonance in "Painter in Your Pocket" by Destroyer

Assonance in "Something in the Way" by Nirvana

In this example, there are two sets of assonant sounds, one set on the long "e" sound, and another on the short "a" sound.

Assonance in "Without Me" by Eminem

Eminem uses assonance in complicated ways throughout his songs, giving them additional rhythm and structure. This example from "Without Me" is a good example:

Why Do Writers Use Assonance?

Assonance is, fundamentally, an intensifier of language. This intensifying occurs in several senses. 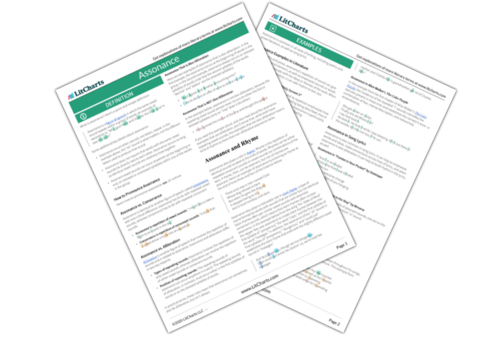