What is an aphorism? Here’s a quick and simple definition:

An aphorism is a saying that concisely expresses a moral principle or an observation about the world, presenting it as a general or universal truth. The Rolling Stones are responsible for penning one of the most catchy aphorisms of all time: "You can't always get what you want." Aphorisms are often (though not always) witty or humorous, and they're used everywhere, from philosophical texts and great works of literature, to pop songs and everyday conversation.

Some additional key details about aphorisms:

Here's how to pronounce aphorism: aff-or-iz-um

Aphorisms allow people to convey an idea or even a worldview using just a few words. As a result, they are used frequently in everyday speech, as well as in all types of literature. Some aphorisms are regional colloquialisms that originated as folk sayings, but even aphorisms that originate in literature are often quoted and repeated frequently enough that they become common in everyday speech.

It's important to remember that aphorisms do not have to express ideas that all people believe are true, or ideas that are true in every situation (if that were the case, aphorisms would be incredibly rare). Rather, an aphorism expresses an idea that someone (and usually the speaker) holds to be universally or generally true, though aphorisms can also be used to satirize (make fun of) ideas that others believe to be true.

Most people think that aphorisms, adages, and proverbs are all the same thing. However, some people maintain that adages and proverbs are two specific kinds of aphorism. Here's a rundown of the different perspectives on the relationship between these terms.

People who think that adages are a type of aphorism argue that an aphorism is a concise observation that has remained popular over time, whereas an adage is a new saying that conveys the same meaning as an older aphorism. By this definition, "carpe diem" (which means "seize the day") would be an aphorism, while "YOLO" (a recent acronym for "You Only Live Once") would be an adage.

The word "proverb" comes from the latin proverbium, which means "words put forth." Because the word's etymology is linked to the idea of spoken language, some people say that proverbs are aphorisms that come from spoken language rather than from a literary source.

Aphorisms vs. Epigrams and Witticisms

Aphorisms, epigrams, and witticisms are all short, pithy statements, but they have some key differences that are important to understand. Aphorisms are set apart from epigrams and witticisms by two key factors:

While in most cases aphorisms are used as a genuine expression of an idea that the writer or speaker believes to be true, aphorisms may also be used ironically in order to cast doubt on an idea that is commonly taken as universal truth.

For example, consider the opening line of Jane Austen's Pride and Prejudice:

It is a truth universally acknowledged, that a single man in possession of a good fortune, must be in want of a wife.

While it's difficult to know from this line alone if Jane Austen really believes that all wealthy single men are "in want of a wife," Austen's phrasing of this aphorism (a truism of Victorian England) hints that she might be a skeptic. All aphorisms express ideas that some believe to be universal truths, yet by stating outright that this"is a truth universally acknowledged," Austen creates a hyperbole (or overstatement) that is subtly satirical. As her novel goes on to show, not all wealthy single men should marry (or wish to marry), and Austen rejects the notion that in marriage, securing a fortune is just as important (or even more important) than finding love.

Writers of literature often invent memorable aphorisms because they need to communicate a big idea in a striking way. Some aphorisms that originated in literature are now so common that their literary origin is practically unknown, while other aphorisms are still strongly associated with the authors that penned them.

In one of his elegies, the ancient Roman poet Sextus Propertius wrote the following line:

While this line is unrecognizable today, it is the origin of the common aphorism "absence makes the heart grow fonder."

All happy families are alike; each unhappy family is unhappy in its own way.

This aphorism sets a thematic backdrop for the novel, which follows several different unhappy families. In a way, Tolstoy's aphorism is a justification of (or explanation for) his subject matter: if all happy families are alike, then unhappy families must be the only interesting subject for literature.

Aphorism in The Importance of Being Earnest

In The Importance of Being Earnest, Jack and Algernon exchange the following lines, which include an aphorism and a witticism:

Jack: ...That, my dear Algy, is the whole truth, pure and simple.

Algernon: The truth is rarely pure and never simple. Modern life would be very tedious if it were either, and modern literature a complete impossibility!

Through Algernon's aphorism, he expresses a general philosophical principle that cleverly questions Jack's use of the phrase, "the whole truth, pure and simple." Yet his next sentence, a witticism, uses that aphorism as a starting point to fuel a joke about the complex and often enigmatic nature of modern literature. The Importance of Being Earnest is a satire, and these lines show how Wilde uses aphorisms to pivot between serious and comic observations.

This list represents just a small fraction of the aphorisms people commonly use in everyday speech.

Here's a short list of some famous aphorisms that come from political speeches or writing.

Aphorism from the King James Bible

Many commonly-used aphorisms originated in religious texts. The King James Bible, known for its virtuosic use of language, is full of aphorisms such as these:

Since aphorism can heighten drama and convey a big idea succinctly, many of the most iconic and quotable moments from film involve aphorism:

Why Do Writers Choose to Write Aphorisms?

As the above examples from Anna Karenina and Pride and Prejudice show, aphorisms can make for excellent opening lines because they introduce big ideas in relatively few words—in other words, they pack a punch. Of course, aphorisms function just as well within the body of a work. Regardless of where they occur in a text, writers use aphorisms to cleverly and concisely express observations or philosophical ideas.

Because aphorisms are short phrases that evoke big ideas, writers often use them as shorthand for a work's central themes. For example, by opening Anna Karenina with the aphorism, "All happy families are alike; each unhappy family is unhappy in its own way," Tolstoy introduces a theme that he will build on and explore throughout the novel: that unique and deeply personal forms of unhappiness are part and parcel of what it means to have individuality.

Aphorisms from well-known literary, political, philosophical, and religious texts are often repeated and adapted, recycled and reused. For that reason, writers sometimes use an aphorism coined by another writer to allude to that writer's ideas. For example, someone who writes, "religion is the opiate of the people" may do so in an effort to align herself with Marx's atheistic, anti-capitalistic worldview. A person who opens an essay with the phrase, "it is a truth universally acknowledged" is making an allusion to Austen's Pride and Prejudice, and thereby subtly informing his audience that, like the work of Austen, his writing should be read as social criticism. 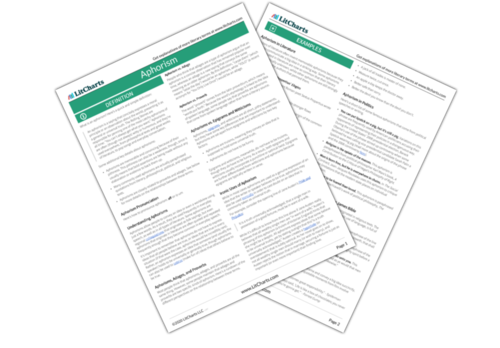