What is rising action? Here’s a quick and simple definition:

The rising action of a story is the section of the plot leading up to the climax, in which the tension stemming from the story's central conflict grows through successive plot developments. For example, in the story of "Little Red Riding Hood," the rising action includes everything that takes place after Little Red sets off for Grandma's house—up to the moment she comes face to face with the Big Bad Wolf. In other words, most of the story is rising action, which is often case.

The rising action is really the "meat" of any story, in which most of the important action occurs. Generally speaking, any work of writing that has a plot can be said to have rising action. Here are a few of the key defining features of rising action to help you identify it:

The Rising Action and Freytag's Pyramid

One of the first and most influential people to create a framework for analyzing plots was 19th-century German writer Gustav Freytag, who argued that all plots can be broken down into five stages:

Freytag originally developed this theory as a way of describing the plots of plays at a time when most plays were divided into five acts, but his five-layered "pyramid" can also be used to analyze the plots of other forms of literature, including novels, short stories, films, and television shows. Here's the pyramid as originally defined by Freytag:

One important thing to note about the shape of Freytag's pyramid is that it shows all parts of the story as having equal length, with climax at the very center of the diagram. However, this is actually a bit misleading, since the rising action is usually longer than other parts of the story, and ends closer to the story's ending than its middle. Therefore, a slightly more accurate version of Freytag's pyramid (modified to reflect a longer rising action) might look something like this:

While Freytag's pyramid is very handy, not every work of literature fits neatly into its structure. In fact, many modernist and post-modern writers intentionally subvert the standard narrative and plot structure that Freytag's pyramid represents. So while the rising action is often spoken about in relation to other parts of Freytag's pyramid, there may be times when it's easier to determine what part of a story is the rising action based on criteria other than its position relative to other sections of the plot, such as what part of the narrative builds tension or suspense.

In Tennessee Williams's A Streetcar Named Desire, the rising action begins when Blanche Dubois arrives at the home of her sister, Stella, and reveals that she has, under mysterious circumstances, lost possession of their childhood home. This is the inciting incident. Stanley, Stella's husband, is immediately suspicious of Blanche, who in turn is very critical of Stanley and derides him constantly for his low class and "primitive" ways. The tension between these three characters grows over the course of the months that Blanche stays with the couple in their tiny apartment, and the mystery around the circumstances prompting Blanche's visit also continues to grow, until one day Stanley tells Stella everything he has heard about Blanche's sordid past from others: that she was fired from her teaching job for having an affair with a seventeen-year-old boy, and began working as a prostitute at a local hotel. Tension reaches a new height after this revelation, as it's unclear how all the various characters will respond to the new information. The play reaches a climax when Stanley finally confronts Blanche and, it's strongly suggested, rapes her.

Rising Action in Romeo and Juliet

People have differing opinions about where the climax occurs in Romeo and Juliet, and there are therefore two competing views of where the rising action ends. Most can agree that the inciting incident or complication is when Romeo sees Juliet at the masquerade ball and falls in love with her, but discovers shortly after kissing her that she belongs to the Montague family, with which his own family is locked in a bitter rivalry; therefore, their love seems doomed from the outset. The action continues to rise as Romeo and Juliet meet in secret later that night, and are married the next day, also in secret.

Some would argue that the rising action comes to an end the following day, when Romeo kills a Capulet (Juliet's cousin Tybalt) and must flee the city to avoid execution. In this analysis, the remainder of the play (in which Juliet fakes her own death in order to avoid having to marry another man, and Romeo, thinking Juliet dead, actually kills himself) would be considered falling action. But others would argue that the rising action only comes to an end when Romeo kills himself after learning, incorrectly, that Juliet has died. These interpretations are quite different, but neither is wrong. As you can see, how readers define the rising action often depends entirely on where they interpret the climax to occur.

Rising Action in The Rime of the Ancient Mariner

Samuel Taylor Coleridge's The Rime of the Ancient Mariner tells the story of a Mariner who shoots an albatross (a large sea bird) out of the sky after it has been following his ship for several days. Shortly after the albatross dies, the wind disappears and the mariner's ship becomes stranded in the arctic. The Mariner's shipmates hang the albatross around his neck as a punishment. Unable to move without wind, the men on the ship grow so thirsty that they cannot even speak. When the Mariner sees what he believes is a ship approaching, he must bite his arm and drink his own blood so that he is able to alert the crew, who all grin with joy. But the joy fades as the ghostly ship, which sails without wind, approaches. On its deck, Death and Life-in-Death gamble with dice for the lives of the sailors and the Mariner. After Life-in-Death wins the soul of the Mariner, the other sailors begin to die of thirst, falling to the deck one by one, each staring at the Mariner in reproach. The Mariner himself, however, doesn't die; he is cursed to live among the dead crew.

By the time the last of the crew has died, it seems as though it could not get much worse for the Mariner. The sense of tension has ballooned around the question of what his fate will be, and whether he'll ever be free of the albatross around his neck. But then comes the climax: the Mariner has an epiphany in which he realizes the value of all life, and as a consequence the albatross falls from his neck and the Mariner is, at least partially, released from his curse.

What's the Function of Rising Action in Literature?

Virtually every story can be said to use rising action to build the narrative. It serves the following purposes: 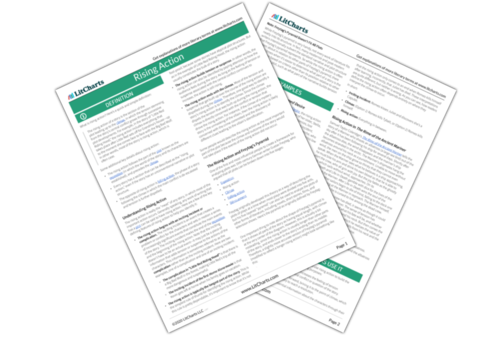